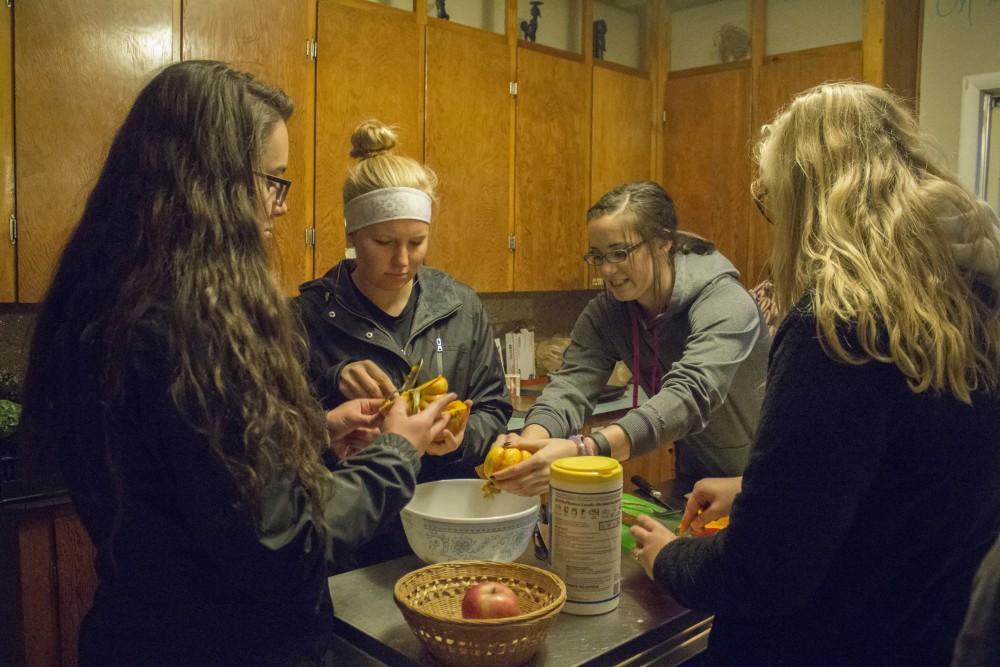 As a fresh spin on its monthly potluck, the Grand Valley State University Farm Club, as part of the Sustainable Agriculture Project (SAP), will host an event inspired by the Food Network cooking competition show Chopped.

The potluck will take place Friday, March 17, at the Luce Street farm at 5 p.m. Like contestants on the show, participants will create dishes from random ingredients. Attendees are encouraged to bring one or two unknown ingredients to contribute to the supply.

Although the event is styled after the show Chopped, the atmosphere will be less stressful than a typical Chopped competition.

“Ours isn’t quite that intense,” said Austin VanDyke, president of Farm Club. “We’re basically going to do one where everyone brings over one ingredient, or several, and then we will see what we have and make dishes from those.”

VanDyke said the event would not be like a competition but would instead be more of an exercise in cooking improvisation.

“A lot of times, it is pretty easy to follow recipes, but with farming, you’re growing crops, and sometimes you might not necessarily know how to use them,” he said.

The Farm Club puts together a potluck at least once a month. For these meals, people come and bring different dishes.

“What’s the point of growing food if people don’t eat it?” VanDyke said.

The theme for this upcoming potluck is the first of its kind for the club. VanDyke said he tries to make them a little bit more interesting.

“This potluck is kind of just a silly one,” he said.

With this theme being a first for the club, it will serve as a test run for future events.

“I have no idea if it will be successful or a total bust,” VanDyke said. “We’re going to do it anyway.”

Ben Lachman, an employee at the SAP, is one of the people who will be attending.

“First off, I’m attending the event because I’m residential leader and employee at the SAP, more so because of the people who attend our potlucks,” Lachman said. “We see faces old and new every month, and regardless of relationships, a sense of communion is reached through the sharing of food and company. The SAP isn’t just about sustainable agriculture. It’s about people.”

VanDyke said one of the ideas behind the event was the concept that “one thing we can benefit from in our food system is being a little bit more open-minded about the foods that we cook with.”

VanDyke hopes the potluck event will encourage people to step outside of their comfort zone a little bit and learn how to use different ingredients that they may have not used before.

“The primary goal is to build connections from person to person, person to food and person to place, try to make people connected to their food systems in general,” VanDyke said.

Outside of the monthly potlucks hosted, there are volunteer hours every Friday from 1 p.m. to 5 p.m. throughout the year at the farm. These volunteer hours are open to everybody, and there are no requirements in terms of prior experience, equipment or specific clothing. Individuals are free to show up with what they have but should be sure to dress appropriately for the weather. There are also 15-minute tours offered.

For more information about the SAP, visit www.gvsu.edu/sustainableagproject/.