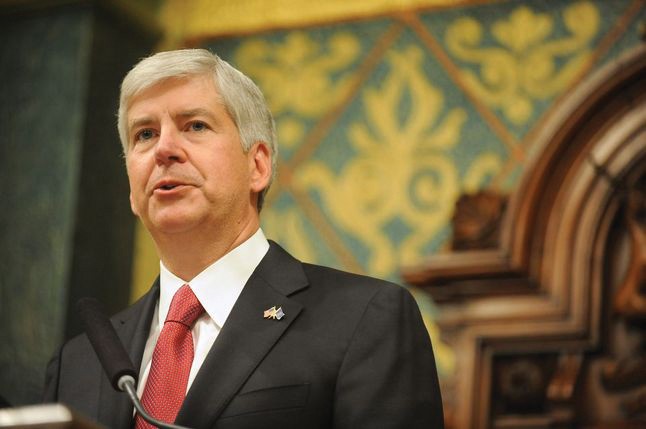 “This is our opportunity,” said Gov. Rick Snyder to a chorus of thunderous applause, during his State of the State address last night. “This is our chance to say, ‘we’re doing the right thing today, so let’s work together.”

Calling for both the democratic and republican parties to join together, Snyder outlined his “road map” for 2013, which included February’s 2013 budget release, an economic development summit in March, the creation of a ‘land strategy’ report concerning Michigan’s four million acres of land in May, and December legislation designed to implement proactive strategies to reduce energy consumption and find ‘green’ energy sources.

Paul Isley, professor and chair of economics at Grand Valley State University, said the most relevant topic to the West Michigan area was Snyder’s plans to convene the Great Lakes Governor’s Council in May to discuss Mackinac Island and ways to better protect and enhance the Great Lakes environment.

“The movement to improve the environment around the Great Lakes will have a positive effect for West Michigan,” he said about Snyder’s plan to “bring the Rapids back to Grand Rapids,” and his summit regarding Mackinac Island and the Great Lakes in general. “A large chunk of our economy is based around recreation on the water, and businesses that are involved with it”
Concerning money matters, Snyder pointed out several topics of interests, including the 15,000 Michiganders who qualify for assistance due to Autism, the 90,000 children who were added to the Helping Kids Dental Program in 2012, and the increase in the state’s ‘rainy day fund’ from $2 million, which Snyder said, “would run the state for about 30 minutes,” to $500 million. He also commented on the Bureaucracy Buster’s Program, which said is arguably the largest court reform in U.S. History.

Snyder listed Michigan’s achievements over the past two years, focusing on the $500 million increase in the tourism industry, the addition of 177,000 jobs to the state’s job market, the nearly 10 percent increase in home sales, and the five percent increase in the price of the homes themselves. Additionally, in 2012 there were several tax and other reforms,and new committees instituted to benefit the state, including the Region Transit Authority, and the Educational Achievement Authority, which will be involved in 135 schools by February of this year.

“I think what (Snyder’s) trying to do is to cast things in a positive note,” said Erika King, a political science professor at GVSU. “He wants to look forward.”

However, King found something lacking in Snyder’s vision of Michigan’s future.

“I didn’t hear him talking about higher education at all,” she said. “There’s still the question everyone wants to know, ‘How are you going to fund public universities?’”

King said that Snyder’s focus, instead, was on repairing Michigan’s infrastructure, which the governor plans to do by improving the transit system, mainly roads.

“The problem is, that means raising revenue.”

However, there was one topic that many people were expecting to come up in the speech, which did not – the Right to Work Act.

“He didn’t mention (it),” King said. “(His speech) took a different type of approach.”