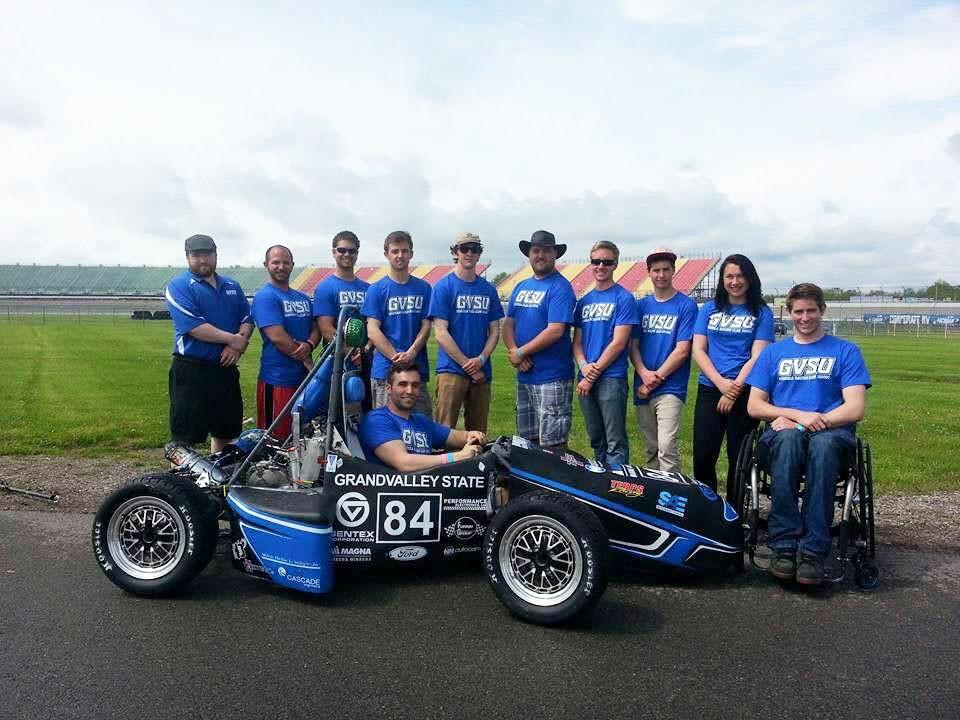 Although this is GVSU’s first year in Formula SAE competition, the racing team has competed in the Baja event since 2002 and won multiple awards.

After gaining recognition from the Baja events, the GVSU racing team decided it was time to move up in the levels of competition and leave its Baja success behind. The next level is the National Formula SAE competition

“It was very overwhelming when we first arrived at the competition,” said Bert Vossler, an engineer and president of the GVSU racing team. “Some teams that we were going up against had been doing the competition for over 25 years.”

The competition has come a long way since 1979, when the first SAE event took place. Today, the working concept of the Formula SAE competition is a fictional one. Schools from across the globe are “hired” by a manufacturing company to design and develop a small formula–style race car, almost like a miniature version of Indy 500 cars.

The competition, however, is more that just racing these cars. The teams must design a car that has both racing value as well as marketing value. Teams must sell the products to the judges at the competition.

“Anyone can be a part of this team,” said Greg Quante, the business and operations manager of the team. “We are always looking for students outside the field of engineering.”

There are two locations for this competition in the U.S.: Michigan and California. Michigan is the largest event, as well as the longest running.

The road for GVSU’s SAE team to reach this year’s competition was a long one.

It all started last January, when the team began working on the car it had bought from the University of Oklahoma. The car finished in the top 20 in the past.

With a strong starting point, the team designed the car to fit its plan for marketing in the competition. The Lakers focused on keeping it simple and developing a car that could run and make it through tech inspection.

Tech inspection is a series of tests that all competing cars must go through in order to qualify. There are four different tests that the car must pass. These tests include suspension, tilt, sound and breaking.

GVSU’s team failed the breaking test the first time. After making some minor adjustments, however, GVSU passed and accomplished its main goal, which was to pass tech inspection.

After the long day of tech inspection, GVSU was able to send its car into either the dynamic events or the racing events. The Lakers chose to enter the autocross event. They did not finish the race because of a car malfunction, but nevertheless were proud of making it to the event.

“After finally passing tech inspection, we were all so tired, but we knew we could still make it to the autocross,” said Garrett Pelowski, the engine team leader and the driver. “I was thinking I didn’t want to screw up in the car, but in the end I had a blast driving it.”

GVSU came away from its first National Formula SAE competition with momentum for next year’s competition.

“We already have a set plan for next year’s car,” Quante said. “We are looking for new kids to join the team even if they aren’t engineering majors.”

The Formula SAE team hopes to bring its new car to the upcoming Campus Life Night and surprise everyone with the new design and plan for competition success.