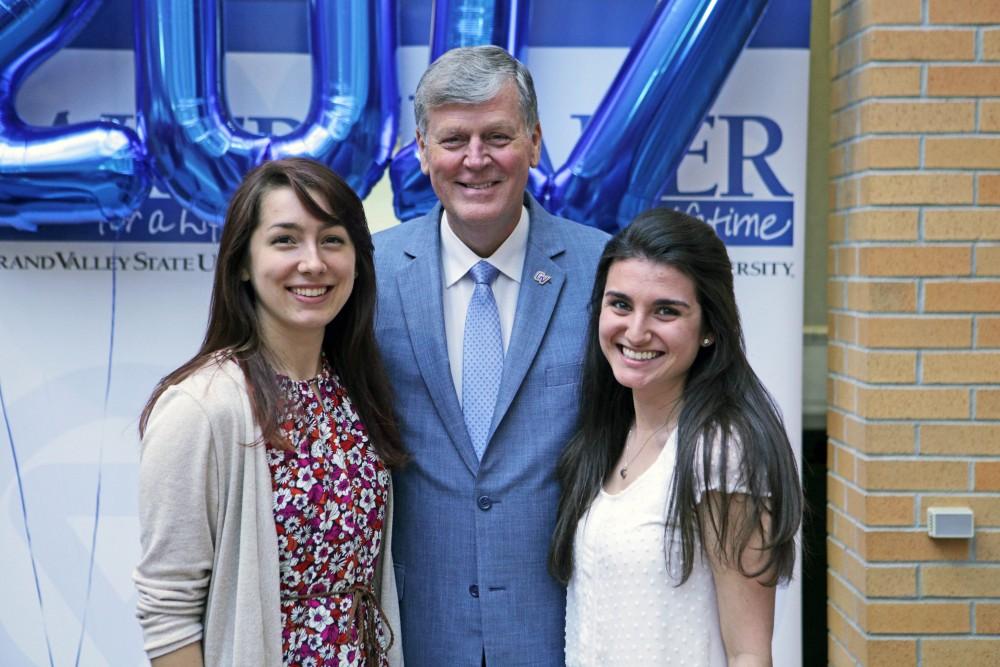 Many traditions at Grand Valley State University have helped graduates transition into alumni and become “lakers for a lifetime.” The Toast With T. Haas ceremony, held Wednesday, April 19, saw a record turnout of 1,400 GVSU students who came to celebrate their graduation with GVSU President Thomas Haas and graduating student senate president Ella Fritzemeier.

Invitations to the toast, this semester hosted in the DeVos Center Plaza, were extended to all students graduating this semester to join and indulge in appetizers and drinks and discuss their memories of GVSU.

Haas called the winter 2017 graduates part of his “extended family” and toasted to the diversity of the graduating class in their fields and in their character.

“We want you to come back as often as you can because this is your home,” Haas said. “I can’t think of a better home than Grand Valley with my extended family right here.”

In his toast, Haas talked about the best part of his job as president of GVSU.

“It’s the students that I have the opportunity to serve and to be with day in, day out,” Haas said. “It’s about you guys, and I am so proud of you individually and collectively.”

Fritzemeier congratulated and reminisced with the graduating class by showing a video highlighting the most memorable moments of their time at GVSU. She talked about many instances where graduates formed life-changing experiences at GVSU, including student senate elections, Presidents’ Ball and Campus Life Night. Fritzemeier and Haas both talked about the infamous “Wrecking Ball” incident in 2013 that resulted in the art piece being walled off permanently.

“It’s a little surreal that this week is finally here,” Fritzemeier said. “For some of us, it may be something that we have waited for with much anticipation. Others may not be ready to leave just yet.”

Haas also thanked the graduates for choosing GVSU as their school of choice. After the Lakers toasted with their glasses of champagne, the university cheer team sounded off with the “Are you a Laker?” chant.

The toast was organized by Megan Ellinger, the manager of student philanthropy initiatives at GVSU and coordinator of the Laker for a Lifetime initiative. She said the toast has seen “exponential” attendance since its inception, with 400 students attending during the toast last semester. She said more and more students are interested in attending each semester.

“People just love it, to come and celebrate their final time at GVSU and get their last selfie with T. Haas,” Ellinger said.

She said the ongoing theme of the event is to encourage graduates to be active after graduation and be connected with alumni programs.

“Your time doesn’t end when you leave Grand Valley,” Ellinger said. “You’re still a Laker for a lifetime.”