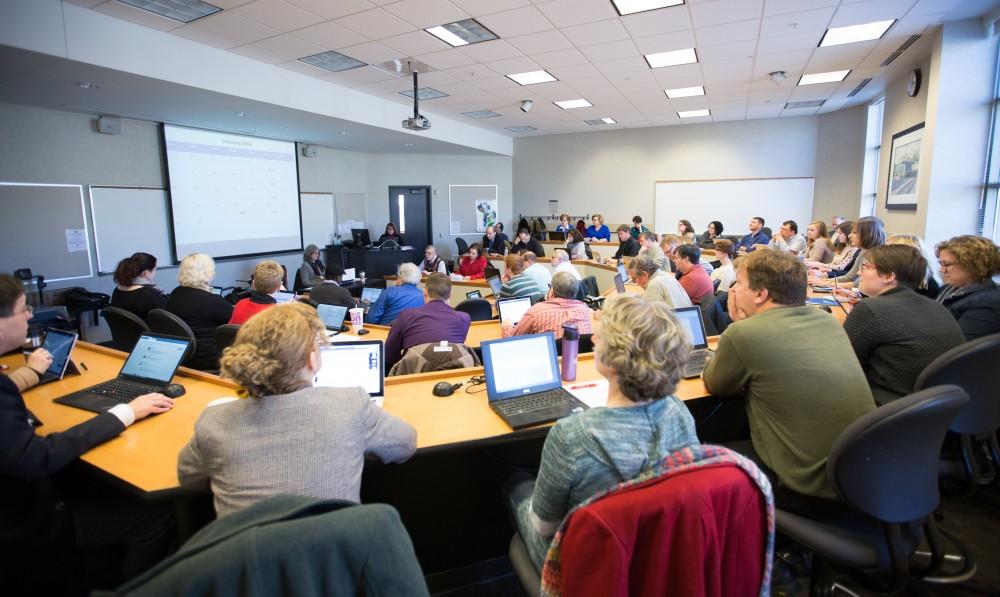 The Mary Idema Pew Library has quickly become a staple of the Grand Valley State University community. Hosting large events such as the annual Teach-In, Exam Cram activities and special exhibits, the library may also contribute to a much larger aspect of college: retention rates.

During a presentation to the University Academic Senate on Feb. 26, the body looked at data collected regarding library usage.

Starting in 2012, the library teamed up with offices in Institutional Analysis to look at retention rates based on students who have seen a librarian in class and those who have not.

What they found was a positive, statistically significant correlation between library instruction and retention rates.

Every year, up to 10,000 students have direct face-to-face instruction with one of the 29 faculty librarians.

During this study, researchers compared students in courses with multiple sections that have at least one section engage with a librarian (courses with single sections were excluded).

“Students who use the library resources tend to stay at a higher rate than those who don’t, but we can attribute a lot of that to motivation and student behavior,” said Mary O’Kelly, head of instructional services for University Libraries.

“I would be thrilled if I could say that (librarians cause student retention),” O’Kelly said.

Though GVSU is not the first university to look at student retention rates in relation to library usage, the positive results did raise interesting questions about the role of faculty engagement with academic support services and the way students are using the library.

Coming up on the three year anniversary of the opening of the MIP Library, library personnel continue to look at how to encourage student success on campus, said Lee Van Orsdel, dean of University Libraries.

“We wanted to try and inspire and engage (students), once we had them in the building, can we teach them something even when they didn’t expect to be taught something,” Van Orsdel said.

This work comes with a focus on student preferences.

“We pretty much tossed everything about the old library in the sense of environments itself,” Van Orsdel said. “We wanted to give (students) the tools to manage their own learning so that once we got them into the building we could keep them there.”

Since the opening of the library in June of 2013, there have been 2.7 million total visits to the building, 4,833 visits in an average day (6,456 visits in an average day during finals week), records of over 1,000 students in the building at one time, 50 intellectual events this year in partnership with 30 academic departments or units and 10 exhibits in the Exhibition Space.

“Students gravitate to the building because it supports the basic need to feel connected to others and to the larger community of Grand Valley,” O’Kelly said. “The library design helps students believe they matter and the library is a place that helps them flourish academically. Students value the spaces, services and experts available to them and see the library as ‘home base’ while enrolled.”