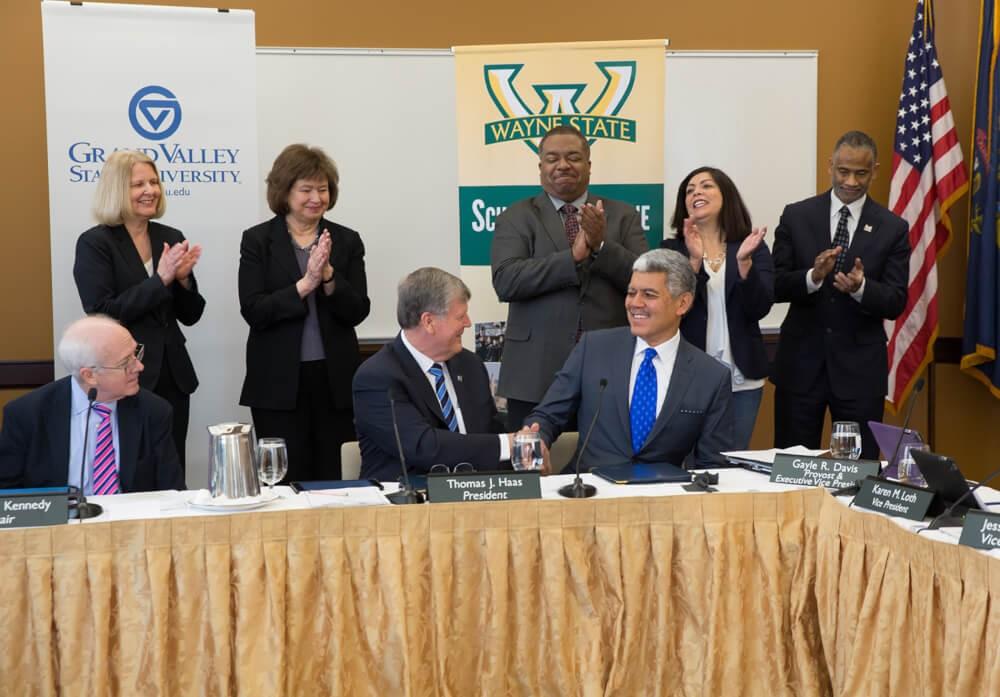 It was no accident that Roy Wilson, president of Wayne State University, picked out a Laker Blue tie the morning of Friday, Feb. 10. Gathered in the Grand Valley State University Detroit Center for the Board of Trustees meeting, leaders from GVSU and Wayne State’s School of Medicine signed documentation Friday to put the “Early Assurance” partnership program into action.

With the new partnership, up to five medical spots for qualified GVSU students will be reserved in the Wayne State School of Medicine following the completion of an undergraduate degree. Students will know if they have been accepted by their junior academic year. The idea behind this initiative is to allow students to explore other educational disciplines senior year to become well-rounded professionals Wilson said.

This program is more than just a partnership to Wilson who personally took advantage of a similar early admission process his junior year in college.

Wilson said that the early acceptance program allowed him to gain a greater appreciation for disciplines outside of the school of medicine which helped to make him a better physician.

“I don’t know that I would have developed a kind of appreciation for the arts, music and philosophy had I continued to take physics, organic chemistry and qualitative chemistry,” Wilson said. “That is one of the major benefits of this program to the students themselves.”

“I think the state of Michigan is blessed to have very fine systems of public education with universities that are different from each other and serve different purposes,” Wilson said.

Under the new partnership, students will also be able to forgo the additional application process to other medical schools presenting an opportunity to focus on a broad and complete undergraduate liberal arts education.

“To be able to focus your energies on things that can further develop you outside of medicine and to do it freely understanding that you’re not competing anymore for a spot will ultimately make them all better physicians and that’s what we really want,” Wilson said.

GVSU President Thomas Haas also touched on how this partnership will be providing opportunity for students interested in practicing medicine in both rural and urban environments.

“It (the partnership) will support students in underrepresented medicine and students from underserved high schools as well as those who are first generation college students,” Haas said. “This agreement further enhances Grand Valley’s role as a partner in the Detroit healthcare community and making a substantial contribution to the physician workforce of the the future.”

Haas said that this is not the end of partnership efforts with WSU.

“Wayne State and Grand Valley are going to continue conversations about other kinds of partnerships that we can see mutual gain on behalf of the citizens of Michigan and on behalf of the students we’re serving,” he said. “I am thrilled we can do this as a first step in creating those partnerships.

Recruitment will begin this spring for GVSU students who would be admitted to the WSU School of Medicine school starting in 2018.

“This is what we’re all about which is doing things for students,” said John Kennedy, chair of the GVSU Board of Trustees. “We talk about this all the time at Grand Valley but it’s a place where it really happens and this is another great example of the staff work that went into something like this to really create opportunity for our young people.”