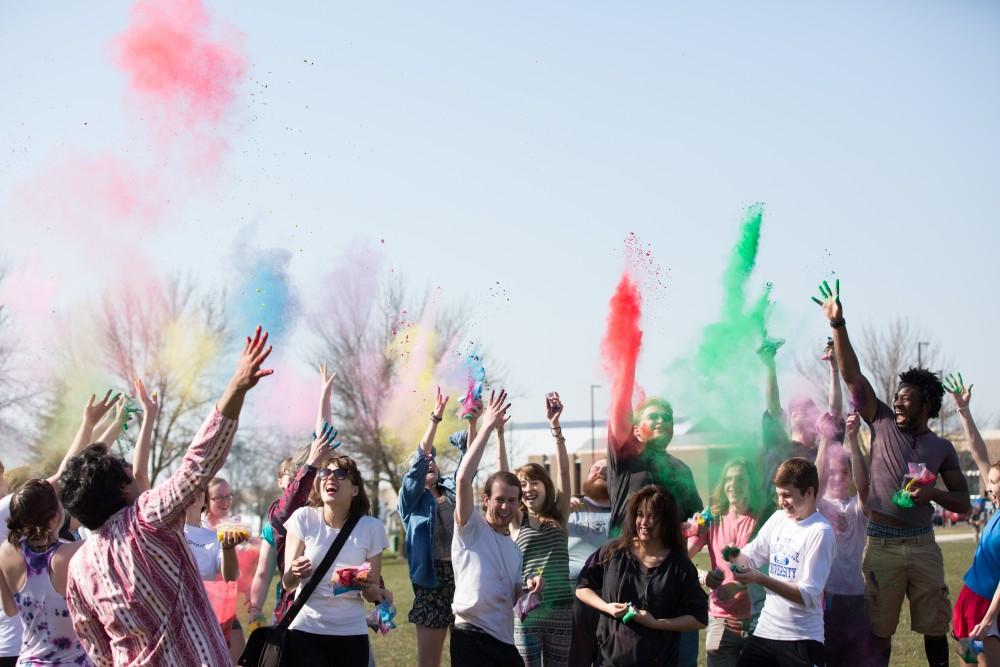 The thing about Holi powder is that no matter how hard you try, it’s absolutely impossible to contain it.

Just like the colorful powder itself, the joy and smiles elicited by the traditional Hindu festival welcoming in spring spreads like seeds in the wind.

On April 15, dozens of students at Grand Valley State University participated in a Holi festival outside of the Mary Idema Pew Library, organized by GVSU’s religious studies program and the Kaufman Interfaith Institute.

Holi, a celebration of spring popular primarily in India and Nepal, is also known as the “Festival of Colors,” because participants throw colorful powders and colored water at each other to ring in the new season.

“If you threw colors on each other on an average day, you would likely get arrested,” said Abishek Ghosh, a religious studies professor at GVSU. “But this is a festival where you do that, and people let you do that. You realize that sometimes, you’ve got to let go, break down walls and start behaving as if the world is one family.

“When we (let people throw colors at us), we are literally telling the other people that ‘I am willing to be conquered by your love.'”

Though this was the first Holi celebration held at GVSU, Ghosh has been throwing these colorful festivals for years.

“The first time I did this, I was at the University of Chicago, doing my Ph.D, and I couldn’t get a permit to do this outside,” Ghosh said. “So, I had it in my living room with about 50 people.”

When Ghosh came to GVSU, he said it was natural to bring the festival with him. In the future, he hopes to grow the audience of the celebration.

Many of the students at the event had never celebrated Holi before and were looking to learn more about other faiths through hands-on experience.

“This is the first time I’ve done it, it’s a lot of fun,” said GVSU student Kaushi Ratnayake. “It’s really good, because no one knows each other, but we’re all throwing powder at each other, having fun. It makes us appreciate other cultures.”

This appreciation of others is key to Holi, Ghosh said.

According to the most recent Campus Climate Survey results, the religious diversity at GVSU has increased by 4 percent since 2011. As the campus becomes more diverse, these interfaith celebrations will become more common at GVSU, said Katie Gordon, program manager at the Kaufman Interfaith Institute.

“The reason that I’m excited to see this public celebration of Holi on our campus is to recognize and appreciate that students, staff and faculty at Grand Valley come from diverse religious traditions,” Gordon said. “We’re noticing that religion on Grand Valley’s campus is an inclusion issue. When we’re looking at how to do this work moving forward, we’re going to see increased diversity, and that will completely shape what our mission is moving forward.”

Though most participants of the Holi festival were first-timers to the celebration of colors, some international students joined in on the fun.

“I’m really happy that (other students) are coming and enjoying it so much, I’m so thankful to them,” said Riya Baben, a GVSU student from India. “This is not the actual Holi, but it’s definitely much better. It’s just making my wish come true.”

For Ghosh, he was glad to share his own religious and cultural background with his students.

“We as individuals, in the Indian traditions, are a microcosm of the universe,” he said. “When spring comes, it’s time to actually go out and celebrate like nature is doing—throw colors on each other and make it very colorful.”

The Holi powders, made from crushed flower petals and rice flour, washed away after the festival, welcoming in the natural colors of spring to the GVSU campus in spectacular fashion.