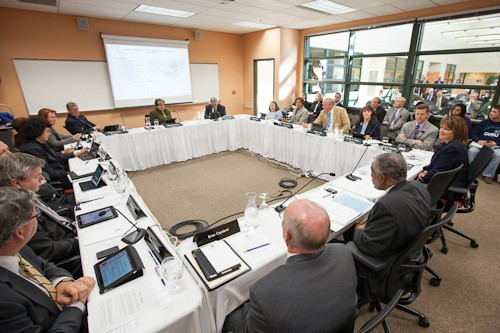 Courtesy Photo / gvsu.edu The Board of Trustees met in Holland on Friday.

Grand Valley State University is gaining more ground in Grand Rapids with the approval of $1.2 million purchase for seven remaining properties on the Lafayette-Hastings block near the downtown Cook-DeVos Health Sciences building on the Medical Mile to make room for expansion of the university’s health care programs.

Opened in 2003, GVSU’s Center for Health Sciences is at capacity, with about 5,000 students enrolled in nursing, physician assistant studies and occupational and physical therapy programs.

The motion was passed at the Nov. 2 Board of Trustees meeting, where trustees also selected the construction manager and project architect and engineer for a new $55 million, 144,000-square-foot biology building to be built west of Padnos Hall and Henry Hall. This project still needs state approval, but will be funded by $30 million in state funds, and the rest through university bonds, and campus development funds.

The lab will provide space for new classrooms, teaching and research labs and faculty offices for the biology curriculum.

Fishbeck, Thompson, Carr and Huber, Inc. was chosen to be the project architect and engineer, along with Pioneer Construction as the construction manager with an anticipated completion date in time for the 2015-16 academic year.

With the competition of the new Mary Idema Pew Library Learning and Information Commons, scheduled for spring of this year, the university will also embark on a $22 million expansion and renovation of the Zumberge Library, funded by university-issued bonds and Campus Development Funds.

At the Nov. 2 meeting, trustees approved the selection of VIA Design as the project’s architect and engineer, and Wolverine Building Group as the construction manager for Zumberge, which will be called the James H. Zumberge Hall when it reopens in 2014.

The renovation includes a 24,000-square-foot expansion to help house GVSU’s provost, human resources, finance and news and information departments into the facility in an effort to help open up classroom space in other campus buildings that were previously faculty and staff offices.