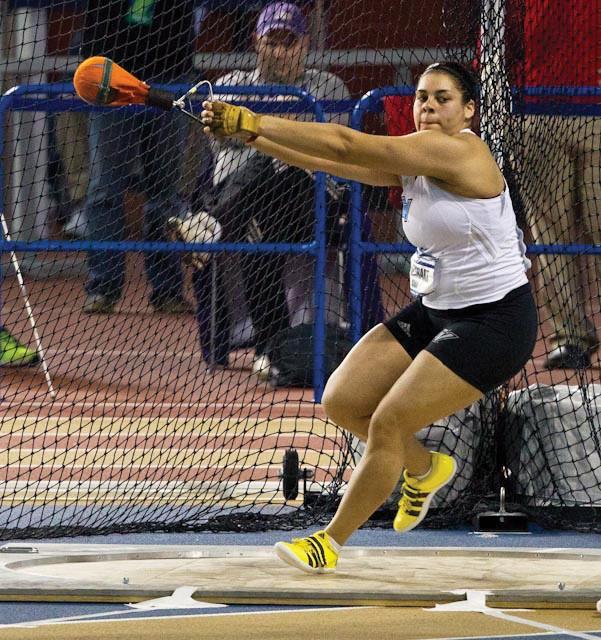 Forty Grand Valley State University track and field student-athletes traveled to Alabama March 7, 8 and 9 with the intent of crowning their 2013 achievements with culminating team titles. The Lakers fell short of matching his and hers first place trophy dreams, but still managed to bring home some hardware.

Senior Sam Lockhart dominated the field from day one, winning national championships in both the shot put and weight throw. In the shot put, four of her five successful throws were good enough to win the competition and her top toss of 16.86 meters was good for a school and complex record.

Junior Kriston Hixon navigated a third place finish in the pole vault event, one of the most contested events of the weekend. Junior Lisa Galasso finished seventh in the 800-meter run with a time of 2 minutes 18.09 seconds, junior Kalena Franklin finished sixth in the 60-meter hurdles with a time of 8.41 seconds and senior Monica Kinney raced her way back to form finishing fourth in the mile with a time of 4:50.48. All five student-athletes were named All-Americans.

All good things must come to an end and as spring break concluded for GVSU students, so did the streak of national indoor championships won by the GVSU women’s track and field team. With 41 points scored, the lady Lakers finished fourth at the national meet behind The Acadamy of Arts (Calif.) (59), Lincoln University (Mo.) (48.5) and Grand Canyon University (45), falling just shy of a three-peat.

“No doubt we were disappointed in the outcome for our women,” said GVSU head coach Jerry Baltes. “We still had some great results. Of course Sam Lockhart winning two events and re-breaking her NCAA meet record in the weight. Kristin Hixson was awesome in the pole vault and nearly won her second indoor championship. Monica Kinney performed great in the final of the mile as well.”

The GVSU men’s track and field, who scored 43.5 points to finish fourth behind St. Augustine University (72), Ashland University (59.5) and Adams State University (55), placed nationally for the first time since 2008.

In Division II track and field national championships, the top four teams place and are awarded hardware – although not all fourth place finishes are created equal. GVSU experienced the differential first hand. The women had been ranked No. 1 wire-to-wire and appeared to be near shoe-ins for a crown.

The oft-overlooked men, who carried a top five ranking for most of the season, had something to prove and did so.

“It was a bittersweet weekend for us,” said GVSU distance coach Nick Polk. “We wanted to be a little more competitive than we were on the women’s side. We have set the bar very high for ourselves on the women’s side, so we come into every meet believing we can win. The men did an outstanding job and exceeded our expectations in many events.”

Both the men and women squads have plenty to celebrate.

“I am proud of how our squads competed and gave it their all over the three days,” Baltes said.

With the working vacation and season completed, there is truly no rest. At GVSU, the job is never done.

“Most of our athletes will go back to focusing on hitting qualifying marks for the GLIAC meet and NCAA Outdoor Championships,” Polk said.

The outdoor season will begin Mar. 30 with a dual meet with Saginaw Valley State University.