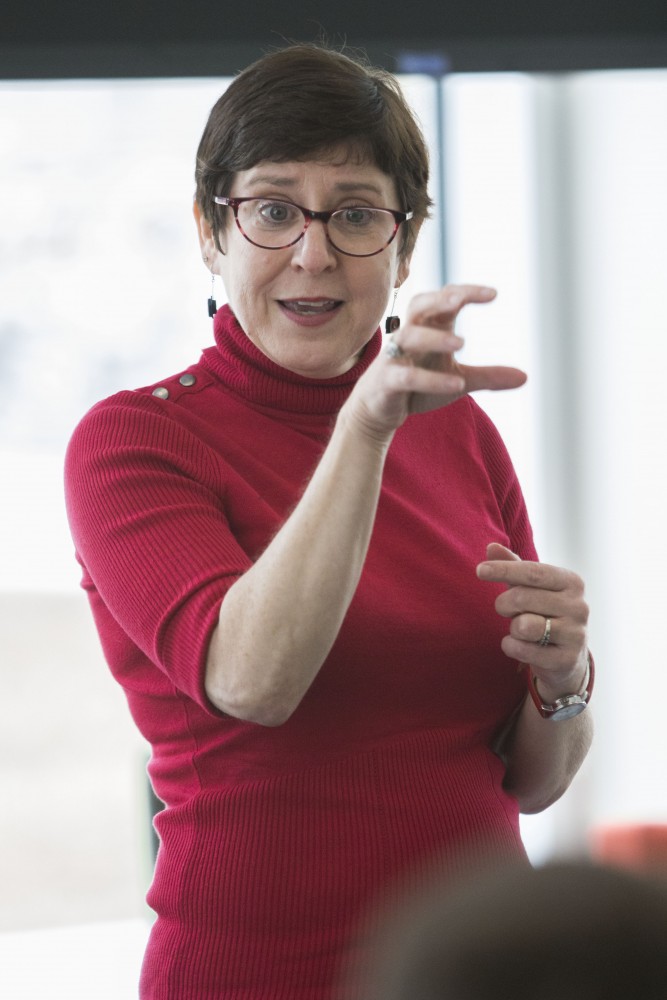 GVL/Mackenzie Bush - Dr. Poska speaks about new historical knowledge of women’s lives and how it changes our understanding of early modern imeperialism and the Atlantic World, Monday, March 27, 2017.

When people think of Spanish colonization of the Americas, they tend to think of manly conquistadors riding horseback with feathers sticking out of their pointed metal helmets, fighting natives and conquering Mexico and northern South America. People tend to think of the adventures of Hernán Cortés and his fight to overthrow the ancient Aztec Empire.

Many textbooks are loaded with the male-centric idea of how Spain conquered the New World, but a lecture from University of Mary Washington history professor Allyson Poska at Grand Valley State University gave a lesser-known perspective of how women played an integral role in colonization as well.

During the Age of Exploration from the 15th to 17th centuries, Spain and Portugal were obsessed with sending their people across the Atlantic Ocean to create settlements in the New World. Spanish citizens wanted to cross the Atlantic to find a new and better life for themselves, to find better work and also to fight for the empire as soldiers, better known as conquistadors.

A lot of fighting and swashbuckling has been written about the colonization on the men’s side, which for many is what made the story memorable. But the women’s side of the story, absent of fighting, is what made the Spanish conquest possible, according to Poska’s lecture Monday, March 27, in the Holton-Hooker Learning and Living Center Multipurpose Room.

“Women were not in any way peripheral to the Spanish conquest and settlement of the Americas but in fact absolutely central,” Poska said.

The Spanish crown was concerned that men were having sex with Native Americans too often and then marrying them, so they encouraged married women to accompany their husbands on the voyage to the New World. Spanish women then helped establish households, raised children, owned land and hired workers to tend to it. When their husbands would die, they would manage their finances and estates and sometimes would even start their own businesses. But probably most important to the Spanish empire is that women helped spread Spanish culture and ideals.

“While it’s true that men often—but not always—led the conquest through violence and warfare, as soon as the battles are over, the long-term processes of conquests and settlement were carried out by both men and women,” Poska said.

Women were agents of the Christian church and helped evangelize natives to become Christian. Women even set up schools where people, mostly natives, could come and learn about the Bible and Christianity. Poska stressed that the women who came over had the autonomy to do a lot.

“I think that women had a lot more power and authority, even regular women, than anyone ever told us,” Poska said.

Poska’s talk focused on the notion that Spanish women were not present in the early years of the conquest of the Americas, which is not true. Many women in Spain made the voyage to the Americas since the very beginning, some married, some not and some widowed. Up to 38 percent of individuals immigrating to the New World were women. She said there is even evidence that some women made the voyage without the company of a man, which was not entirely legal.

“Women of all races and all statuses made the transatlantic journey, both alone and in the company of men,” Poska said.

Poska said the story of the role women played in the conquest of the Americas tells a different tale and changes the narrative that many people have.

“They’re not just blindly following men from one side of the ocean to the other, but they’re acting on their own volition and seeing the Atlantic and the new American colonies as an extension of their lives and experiences,” Poska said.

She said her lecture helped people see the women’s side of the story and why it’s important.

“It gives us a different image because we have the super masculine vision of kind of germs, guns and steel kind of conquest, but really it’s about ladies and babies,” Poska said. “That’s the way empires get set up.

“Everybody used to say Spanish women had to be submissive, and they were cowed by the church and repressed by the men. None of the women I studied were ever any of those things.”

Poska was invited to GVSU by Grace Coolidge, a history professor at GVSU who studies gender and sexuality in early modern Spain. She said she’s known Poska for 20 years because of their aligning fields, and this year, Coolidge is offering a class called “Women in the Atlantic World.” She said having Poska speak was a unique experience for her students to ask questions about an author on the subject of her class.

“I thought this is a great opportunity to bring in a diverse speaker to talk about a subject that’s also diverse to connect with the students in my class,” Coolidge said.