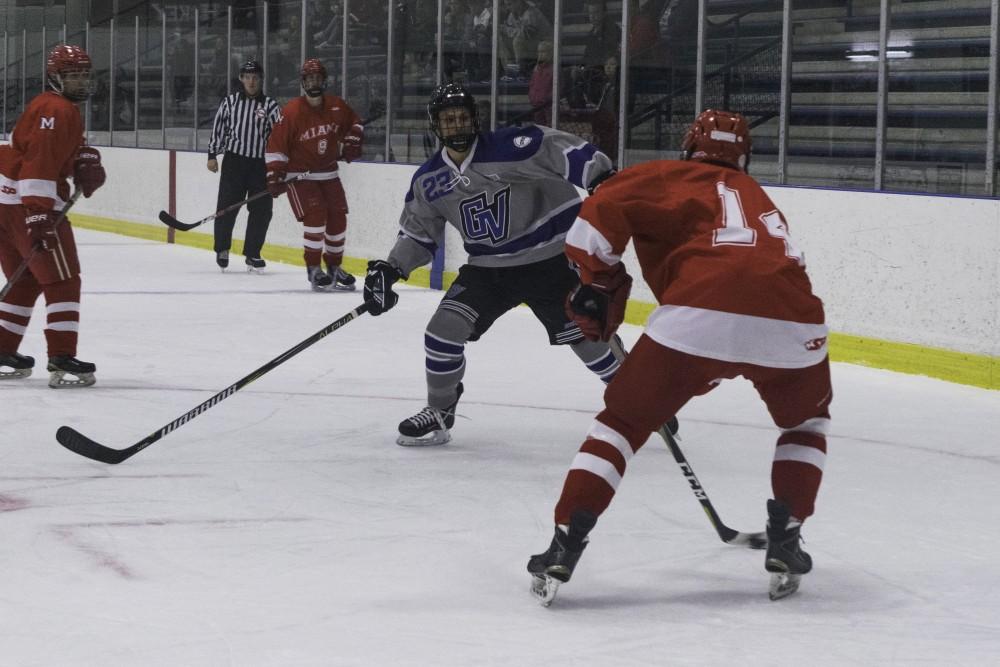 If the Grand Valley State University Division II men’s club hockey team was a weather forecast, it would go something along the lines of this:

Today, ladies and gentlemen, it’s going to be a chilly one with a 100 percent chance of goals, and lots of them.

GVSU DII hockey wrapped up their weekend Friday and Saturday, Oct. 26 and 27, with yet another pair of lopsided wins in a two game series over the Lindenwood-Belleville University Lynx by scores of 8-2 and 7-1 at Georgetown Ice Arena. What was the overwhelming theme for GVSU you might ask? Team speed, and a whole lot of it.

In the opener on Friday, GVSU came out of the gates ready to fly back and forth across the ice. Team speed allowed GVSU to maintain control of the puck and gravitate toward LUB’s goal for almost the entire first ten minutes of the opening period.

The theme carried on from there as GVSU continued to rain down shots on the Lynx defense as the game went on. In the second period, the offense was provided by sophomore forward Evan Newel, junior forward Randy Stoever, and senior defenseman Thomas Luzynski as GVSU widened the margin to 6-1.

Gassed from the constant pressure, the Lynx managed to score a second goal in the third period but was ultimately put away as GVSU scored another pair of goals in the third period. A couple of chip shots from sophomore forward Danny DeBlouw and senior defenseman Lucas Little brought the final score to 8-2 as GVSU captured another victory.

Lindenwood-Belleville, a team known for its physicality according to Hein, once again failed to establish itself as such in game two against the Lakers.

As the saying goes, ‘if it ain’t broke, don’t fix it’, and the Lakers continued what they have been doing all season long as game two began against the Lynx.

The Lakers got off to a similar hot start once again in the first period, featuring three goals to LUB’s one. Hein once again opened up the scoring early, soon followed by goals from senior forwards Danny Smith and Austin Koleski.

Unlike the day before, the Lakers held the Lynx without a goal in the third period while scoring a goal of their own from sophomore forward Grant Smith. At the final horn, GVSU registered another win of the season as the team continues to maintain their undefeated record at 6-0-0.

When asked what has allowed the Lakers to maintain such a high level success early on in the season, junior forward Nick Beers said it boiled down to what former NBA all-star guard Allen Iverson always hated to talk about: practice.

“The key this year has been team chemistry, we come out to practice every day and work really hard,” Beers said. “We keep the speed up, we keep the pace up everyday and it’s definitely showing on the weekends.”

The Lakers take on Trine next at home Friday, Nov. 2 at Georgetown Ice Arena and travel to Trine on Saturday, Nov. 3. The puck drops for Friday’s game at 9 p.m. and for Saturday’s at 7:15 p.m.