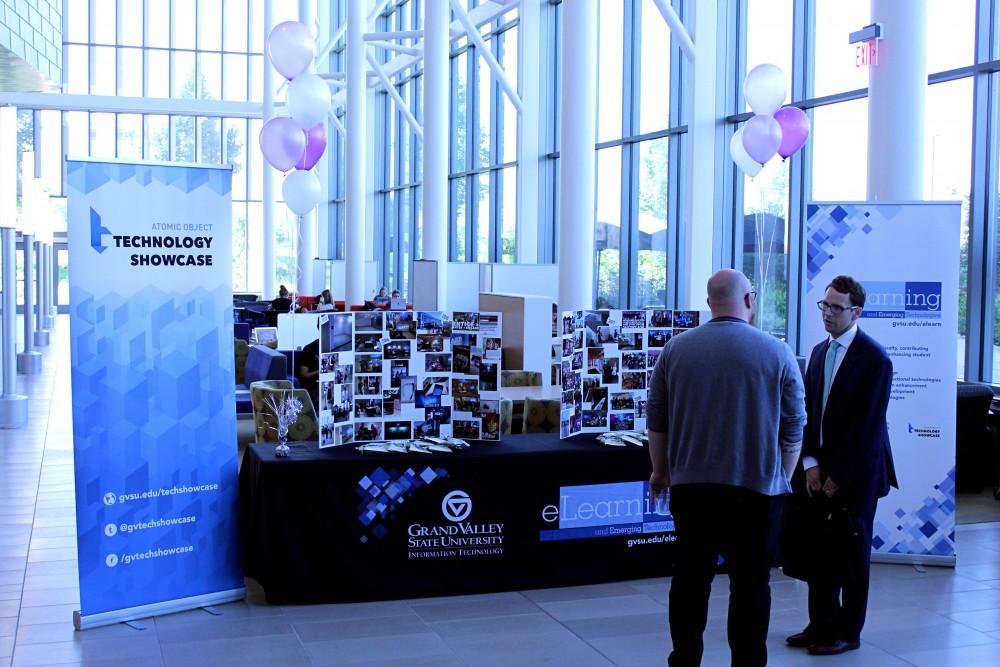 “The lights are intimidating but the people are welcoming.”

That is the personal motto of Grand Valley State University junior, Michael Gould, to describe the Atomic Object Technology Showcase at the Mary Idema Pew Library.

Filled with collections of LED lights, 3D printers, computers and virtual reality sets, the technology showcase in the bottom level of the library provides students and staff members with access to innovative technology. This year, the showcase is celebrating its five-year anniversary and a celebratory open house was held on Friday, Sept. 14 in the atrium of the library.

Eric Kunnen, the Associate Director of e-learning and Emerging Technologies at Grand Valley, said that he and the student assistants decided to throw the open house because, “We are proud of where we have been and where we are going. We want to continue moving from a ‘come and see place’ to a ‘go and do’ place.”

Kunnen began working at Grand Valley when the showcase was first getting underway.

“I wanted to work at Grand Valley because I was excited with all the innovations they had going on—I saw they had the new library and showcase… the showcase was completely empty when I came in,” Kunnen said. “When I first started [working at Grand Valley], getting it off the ground was my first big task.”

Initial funding for many of the machines and pieces of technology in the room came from the Atomic Object— a local business in Grand Rapids. Now, the showcase is seen as a partnership between the library and the Information Technology Department and the two units collaborate to maintain the space.

According to Kunnen, over 62,000 visitors have walked through the showcase’s doors since it first opened in 2013.  Several courses at Grand Valley often make trips during classroom time to explore the showcase as do charter schools and other universities.

The showcase is largely run by student assistants. Senior Megan Thomas, who works as a 3D Printing Specialist, said, “I like how faculty tries to incorporate [technology and the showcase] into the classroom. Not many other colleges or universities have something like this, so it’s a unique approach.”

The open house allowed guests to experience things such as virtual reality, 3D printing and augmented reality. Student assistants were present to bring various pieces of technology out of the showcase room and into the atrium in order to interact with more people.

For sophomore Dean Geschiere, this was his second time experiencing the technology showcase. He said he had previously come with his class to check out what the room had to offer, but wanted to return on his own during the open house. “I just love technology. I love watching people use the VR and augmented reality,” Geschiere said.

Kunnen said he hopes that in the future, the showcase will continue to serve as a place where they can constantly work on discovering the answer to what they want the future of technology to look like in education.

“Technology has impacted our culture in so many different ways, and there is so much potential with things like Virtual Reality and Augmented Reality in the classroom,” Kunnen said. “We are just tapping into it now. I want to continue to work with students and faculty on pioneering the future.”