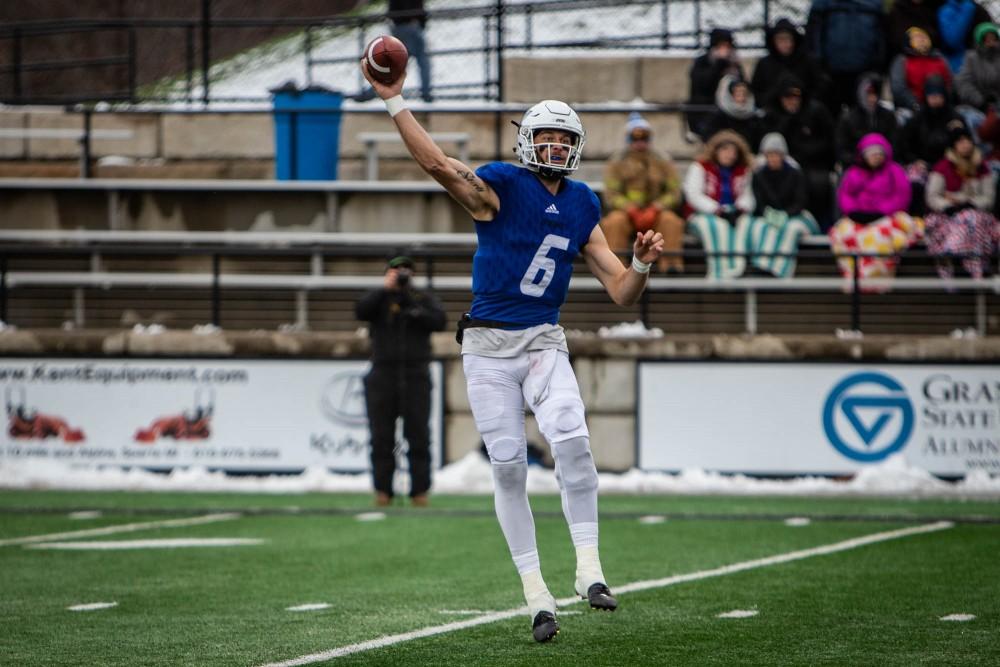 Bart Williams throws a pass in a game against Wayne State on Nov. 10. GVL / Sheila Babbitt

One of the special parts of football in Michigan is the unpredictability of weather. To begin the season, the No. 8 ranked Grand Valley State Lakers played in temperatures over 80 degrees.

On Saturday, Nov. 10, that same team entered the same stadium in sub-freezing temperatures with snow on the ground and beat the Wayne State Warriors 45-21. With the victory, the Lakers finish the regular season 10-1(8-1 GLIAC) and will now prepare for the NCAA Division II postseason.

GVSU honored their senior class before the game, and many of those seniors contributed to the trouncing, including quarterback Bart Williams who completed 20 of 26 passes for 250 yards and three touchdowns. Senior wide receiver Nick Dodson caught seven passes for 104 yards and one touchdown. Several seniors on defense, including Tyree Horton, Dylan Carroll and Brendan McMahon made impact plays by finishing tackles and forcing turnovers.

“I think it was nice getting the recognition,” Williams said. “You remember all the senior days leading up to this point and seeing all the seniors ahead of us that are graduated, but I think we’re at a point in the season where this wasn’t a finale to Lubbers Stadium and football in general. I think we have a lot to look forward to and it starts with good prep this week and we’re really excited for the opportunity ahead of us.”

Running back Chawntez Moss took 12 carries for 100 yards and two touchdowns, one of which was from 52 yards out. Jack Provencher had 10 carries and six catches for 91 total yards and one touchdown.

The Lakers played one of their cleanest games of the season, committing zero turnovers and only one penalty for five yards. They forced four turnovers – all in the second half – rounding their regular season turnover differential to 20-10 in their favor.

This victory will quickly hit the rearview mirror, though, as GVSU will now prepare to host a playoff game for the first time since 2016.

“Everybody’s excited,” Williams said. “We obviously had goals since we got the team together and we want to win as many games as possible. We’re fortunate enough to be in a situation where we get to continue our season. For us seniors, that’s huge. For all we know, if we didn’t show up today, this could have been the last time we got to play football. Any time we get an opportunity to play football, whoever it’s against, whatever the weather’s like, I think everybody on the team is too.”

The Lakers were placed as the No. 3 seed in NCAA’s Super Region three and will host the No. 7 seeded Northwest Missouri State on Saturday, Nov. 17.

While the Lakers did not know who they would play until over 24 hours after the conclusion of the WSU game, Mitchell knew exactly how they would pass the time in-between the final whistle and the bracket reveal.

“We do our banquet, so we’ll have our banquet tomorrow to recognize our seniors, kind of take a deep breath. Then we’ll watch the selection show and when we’re done with that, we’re going to hit the weight room and we’re going to lift.”