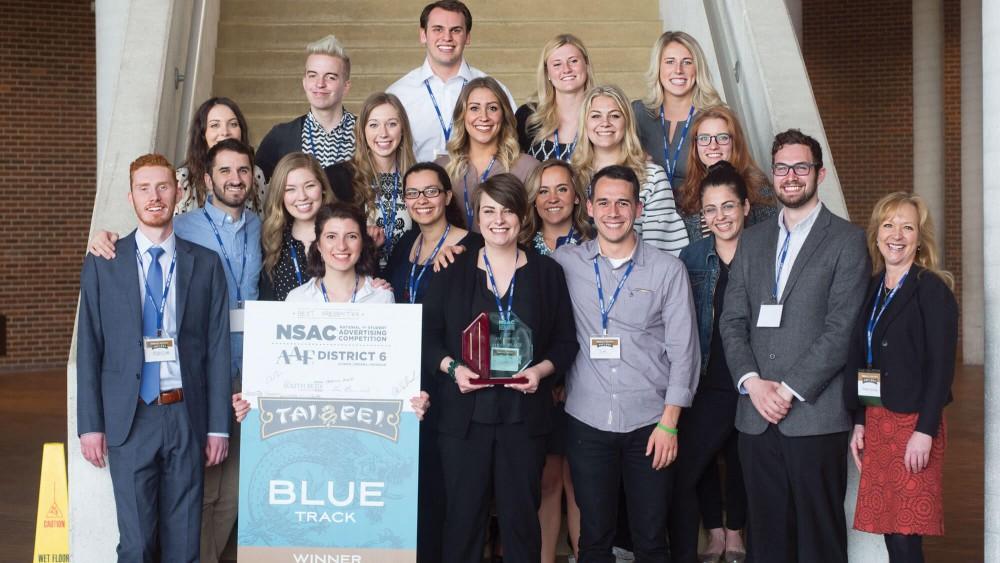 For the third time, the Grand Valley State University National Student Advertising Competition (NSAC) team placed first in the annual NSAC competition. The team, which has placed every year since GVSU began participating in the competition 10 years ago, also made it past the semifinals round Thursday, May 4, and will move onto nationals in New Orleans Wednesday, June 7.

The challenge this year was for the teams to develop a marketing and retail campaign for Tai Pei frozen foods that appealed to a younger millennial audience. The teams had to come up with marketing strategies that would generate excitement for the brand, combat negative perceptions of frozen foods, utilize platforms that would appeal to a younger millennial audience and show off the positive attributes of the brand, such as their low cost, good taste and convenience.

Dan Goubert, a member of the advertising team, said the entire team was “ecstatic” when they heard the news of their victory in the semifinals.

“It almost seems too good to be true,” Goubert said. “It’s a mix of disbelief and pride. We’ve been working on this for an entire year, and now we’re finally seeing the fruits of our labor pay off.”

Robin Spring, the team’s adviser, said her students came up with a lot of interesting ideas for tackling the challenges. She said her team came up with plans for engaging younger audiences through mediums such as YouTube, Twitch TV, Tinder, Snapchat and Hulu.

“You can tell they were being creative in reaching this particular audience and then engaging them with interesting material,” Spring said.

Spring said the first-place win shows that the marketing and advertising community at GVSU is “killing it.” She noted how GVSU beat many Big Ten schools in district six, which includes Michigan State University, University of Michigan and University of Illinois.

“We came up with a very detailed and well-thought-out integrated marketing communication plan to raise awareness, create affinity, create interaction and solve the issues for our target market,” Spring said.

Spring said the team has never not placed in the NSAC and has made a name for itself in the district competitions over the years.

“Grand Valley is a force to be reckoned with, and we are starting to get a reputation for being very strong in our advertising program,” she said.

This year’s semifinals included 18 teams across the United States with only eight being able to move onto the finals. GVSU made it past this round, having only five minutes to present their marketing plan to a panel of judges, with a 10 minute Q&A period afterward.

This year’s finals competition will coincide with the American Advertising Federation’s ADMERICA2017 conference in News Orleans that will take place Wednesday, June 7, through Saturday, June 10.

Spring said her team is ready for finals and believes GVSU will place high in the competition this year.

“I have absolutely every bit of confidence in this team,” Spring said. “They are incredibly dedicated and intelligent and have poise beyond their years.”

Spring said the team is now exploring fundraising efforts for everyone on the advertising team to be able to make it to the competition in New Orleans. The team has set up a GoFundMe page and will host a concert Friday, May 12, at Seven Steps Up in Spring Lake, Michigan. Spring said her team is also looking for sponsors.