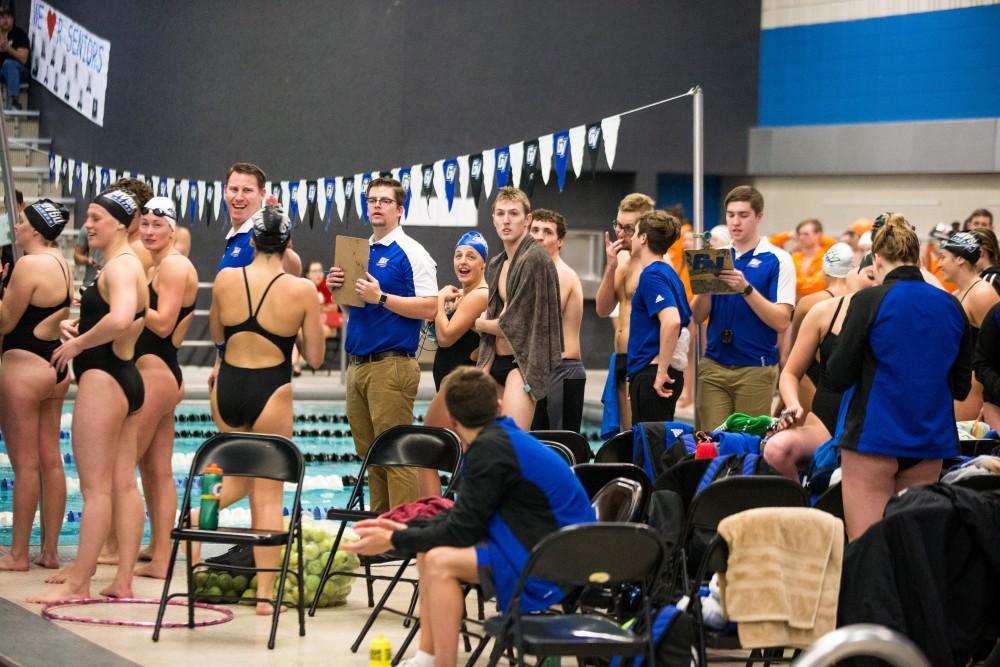 As practice is winding down, members of the Grand Valley State swimming team do one last rotation of 50 yards before exiting the pool. They’re all on the same page, crawling their way to the finish one by one.

In the middle of the pack is Moritz Bartels, a freshman distance swimmer who is wrapping up an intense race with fellow distance swimmer Dayen Wilson. Bartels gets out of the pool with a wide smile on his face, seemingly not phased by the fact that he just swam 1,200 yards during the practice.

Of course, it could be because he just realized that he was named GLIAC Male Athlete of the Week. It could also be that after a few months spent here in the U.S., the German native is starting to feel right at home at GVSU.

Bartels is from a small German town called Zweibrücken, located in southwest Germany right near the French border. Given that the town has a population of nearly 35,000 inhabitants, it is safe to say that coming to GVSU has offered a true change of scenery for Bartels, both in and out of the pool.

The freshman did not find GVSU, but rather GVSU found him. As an international student, Bartels went through an agency to find a new home in the U.S. GVSU swimming and diving head coach Andy Boyce received an email with Bartels’ profile on it and then decided to learn more about the open-water swimmer.

“We contacted him, set up a couple Skypes, lots of emails, explained our program, explained that we were looking for someone to help in the distant events,” Boyce said.

Bartels contacted multiple schools around the nation but felt a deeper connection here at GVSU.

“I spoke to a lot of different schools, but I had a good feeling with Andy,” Bartels said. “He is a nice guy and a good coach. I also knew (another German freshman) Melina (Goebel), and she liked it here, so I thought that was the right fit for me.”

The freshman did not waste any time once he started competing for GVSU. However, competing for a team was a foreign concept to him. Bartels had always been competing on an individual level when he lived on the other side of the Atlantic. Now that he’s at GVSU, he is learning about the benefits of competing in a collective environment.

“It’s totally new for me,” Bartels said. “At home, everything is individual; you do everything for yourself. Here, when you have a dual meet, it’s about the team; you try to score for the team. It’s fun because everybody cheers for you.”

Boyce thinks this has a direct correlation with the fact that his 14 international students love competing in the U.S.

“When they’re surrounded by a team caring about how they do, it makes a difference,” Boyce said. “I think it’s the reason we see the success that we see, and day in and day out, you have people right next to you with alike ability that are going to push you to get better.”

Bartels has felt the encouragement of his teammates this year, as he has already broken the school record for the mile with a time of 15:44.79. But the freshman wants more, and not just on an individual level. His main goal is to help his team win the GLIAC Championship because he knows how important it is to his teammates.

The freshman has only begun his journey in the U.S., and a lot remains to be accomplished, but coach Boyce is not too worried about it.

“We hope he can be right at the top, maybe even this year,” Boyce said. “The 1,000, the 500, the mile are all good events for him. He definitely has the potential to finish in the top eight finalists in the national championships.”

Bartels is embracing the challenge and agrees with his coach.

“My big goal here is to make it to the nationals and maybe after that make it to a final,” Bartels said, followed by a chuckle and a smile.