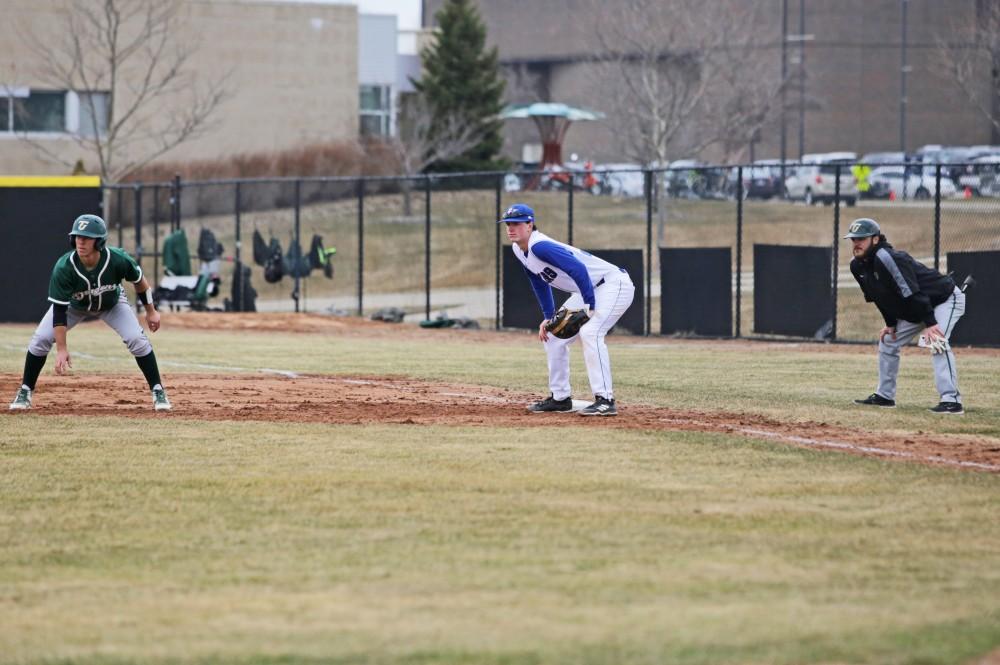 GVL / Emily Frye Ryan Blake-Jones keeps an eye on the pitch while holding down first base during the home opener game against Tiffin on Thursday March 29, 2018.

They say that hitting a baseball is the hardest thing to do in sports. It’s harder than throwing a spiral, swishing a jumper or stopping a slap shot.

To a hit a round ball with a round bat squarely at upwards of 90 miles per hour with less than half a second to react should not even be possible, but it is.

If hitting is an art, consider Grand Valley State’s Ryan Blake-Jones an artist. In 2018, the catcher-turned-first-baseman is tearing the cover off the ball through 24 games, as evidenced by his .414 batting average, 36 hits, four home runs and 29 RBI—all of which are team highs.

“Just changing my mentality from previously being pretty passive to being more aggressive in the batter’s box (has helped),” Blake-Jones said. “Looking for fastballs early, I’ve just been seeing my pitch and getting it. It’s just been an aggressive mindset. I think it’s really fun to compete, just you versus the pitcher one on one. It’s fun to see who’s better in that moment.”

At 6-feet-3-inches and 219 pounds, the imposing sophomore out of Ann Arbor, Michigan, got a late start getting his name out there for college coaches to see, which wasn’t until GVSU head coach Jamie Detillion caught wind of him thanks to his teammate Brett Nearing, who had already committed to GVSU for baseball.

“We didn’t know a lot about him at the time; we didn’t know him,” Detillion said. “We had one of the Nearings from his school, so their coach had been in contact with my assistant at the time. We went over and saw him and definitely thought there was some upside there. After, we talked and decided we wanted to bring him in and give him a chance.”

It was just as easy for Blake-Jones to make the decision to join the Lakers as it was for them to offer him a spot on the squad.

“I signed late here, and I really just came on a visit and liked the feel of the campus,” Blake-Jones said. “It just kind of felt like home here, and the coaching staff were all really great guys, and a friend from high school was already committed here from my team, so it was really a comfortable fit.”

Despite Blake-Jones coming in as a catcher and playing there for a good amount of his freshman year, Detillion gave him the opportunity to move out from behind the plate to the first baseman position after a handful of players graduated and left a void there heading into 2018.

While his glove at first is still a work in progress, Blake-Jones has done plenty to hold down his full-time starting spot with only one error through 24 games—good for a .995 fielding percentage.

One major part of his game that is not as apparent as his thunderous bat or steady glove, though, is his mind.

“I think we can break down any part of the game and he would have something that I would say is an intelligent baseball comment,” Detillion said. “If we ask a question, he always has a solid answer for anything. If we talk about mechanics or we talk about approach, he’s pretty in tune with what it should look like and what it does look like.”

The first baseman humbly agreed with his coach, citing his older teammates and coaching staff as sources of knowledge to soak up from as well as the load of baseball he watches in his free time.

“I watch a lot of baseball,” he said. “One guy whose swing I really like is Gary Sanchez of the Yankees. He’s just this big power right-handed bat. I really like his swing and how simple it is.”

Like Sanchez, Blake-Jones’ poise and confidence from the right side of the plate often translates into success for his team and headaches for opposing pitchers. Detillion cites his presence in the cleanup spot as “stress-relieving,” and that his teammates are able to feed off of him.

As long as the weather eventually warms up in Allendale, Blake-Jones and the rest of the Laker lineup could be queued up for big things.