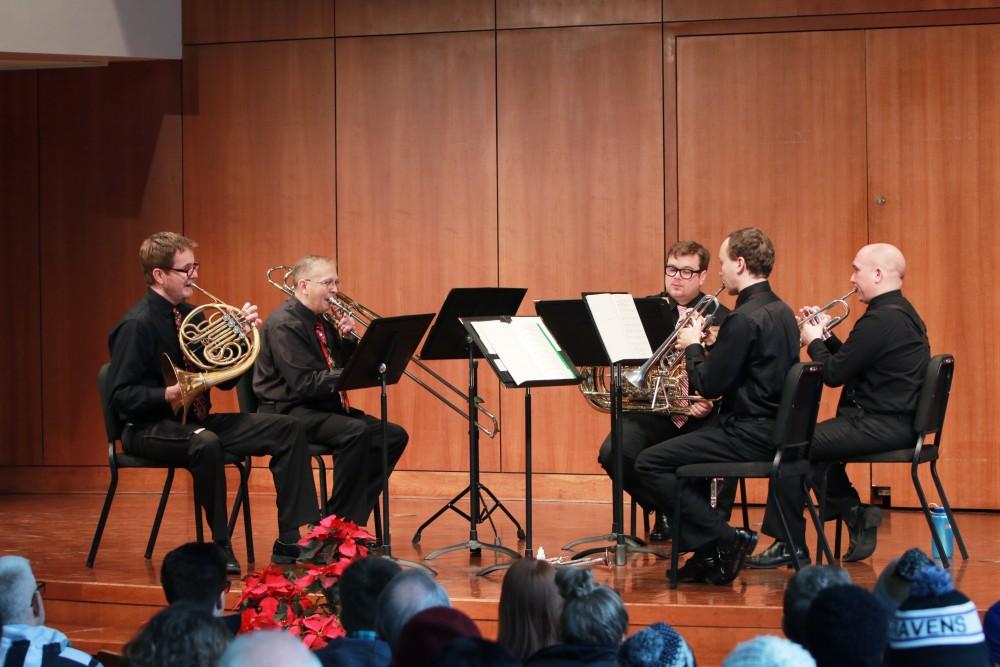 On Dec. 2, members of the GVSU Brass Quintet performed holiday music in the Cook-DeWitt Center for students and faculty in Allendale, MI.

From traditional carols to popular favorites, the Grand Valley State University Brass Quintet rang out the holiday season during the last Arts at Noon event of the semester. The concert showed off the versatility and fun of the brass quintet as the musicians performed seasonal music from various centuries and traditions and led the audience in a sing-along.

The brass ensemble performed for a full audience in the Cook-DeWitt Center at noon on Dec. 2. Affiliate professor Richard Britsch played horn in the quintet and said brass ensembles are particularly suited for performing holiday music.

The GVSU Brass Quintet is a faculty ensemble with visiting professor Alex Wilson on trumpet, TJ Perry on trumpet, Britsch on horn, associate professor Mark Williams on trombone and affiliate professor Paul Carlson on tuba. The group performs in concerts on campus and also serves an outreach group to local music programs.

Carlson also performs with the internationally-known brass quintet Dallas Brass. Some of this music was performed at Wednesday’s concert with Dallas Brass; he said he enjoyed the chance to share the music with GVSU.

“We have such fantastic artist teachers in the music department and performing with my colleagues in the brass area is always a rewarding musical experience for me,” Carlson said. “It was very fun to perform some Dallas Brass charts with my GV colleagues. I’m lucky to play with such great musicians in both groups.”

Carlson said performing as a brass quintet brings the challenge of functioning both as a soloist and an accompanist.

“There are only five musicians on stage, and we can each only play one note at a time,” Carlson said. “We really have to bring our best and listen and react to each other at a very high level to help the group make the best music for the audience.”

Part of creating the best music for the audience meant including songs that represents a variety of aspects of the holiday season, including 15th century music, recent songs like “Sleigh Ride” and the celebration of Hanukkah.

“There really is a wide spectrum of music that’s been arranged for brass ensemble. It was never intended for instruments like ours, but it always seems to work; stuff that just sounds great on brass instruments.”

In addition to covering a broad range of music, the performance included a comical surprise for the audience during the playing of “Sleigh Ride,” as equipment and stage manager Nate Bliton reached out from off-stage with a slapstick to play the part of the whip.

“There was the little surprise with Nate Bliton who played the whip,” Britsch said. “I figured the audience would laugh about that one, I didn’t know it would be that funny. That was great.”

Carlson said he enjoys the fun of the holiday concert and it is one of his favorite concerts that he performs all year.

“It is a really great thing to have a concert while classes are still in session where the university community can get together and share our different holiday traditions,” Carlson said. “I always feel that it’s an intimate concert and helps everyone in attendance to share in the joy of the holidays with their GVSU family.”

Britsch said he hopes students were able to enjoys themselves at the concert and also gain some exposure to music they aren’t normally exposed to.

“I hoping that (the concert) will broaden (students’) horizons a little bit from the normal stuff that they’re plugged into, that they listen to all day between classes and when they’re sitting and studying,” Britsch said. “I hope that maybe they’d like to explore what else is out there. There’s a vast array of musical sound and colors to listen to. I would like them to investigate more possibilities of music to hear.”