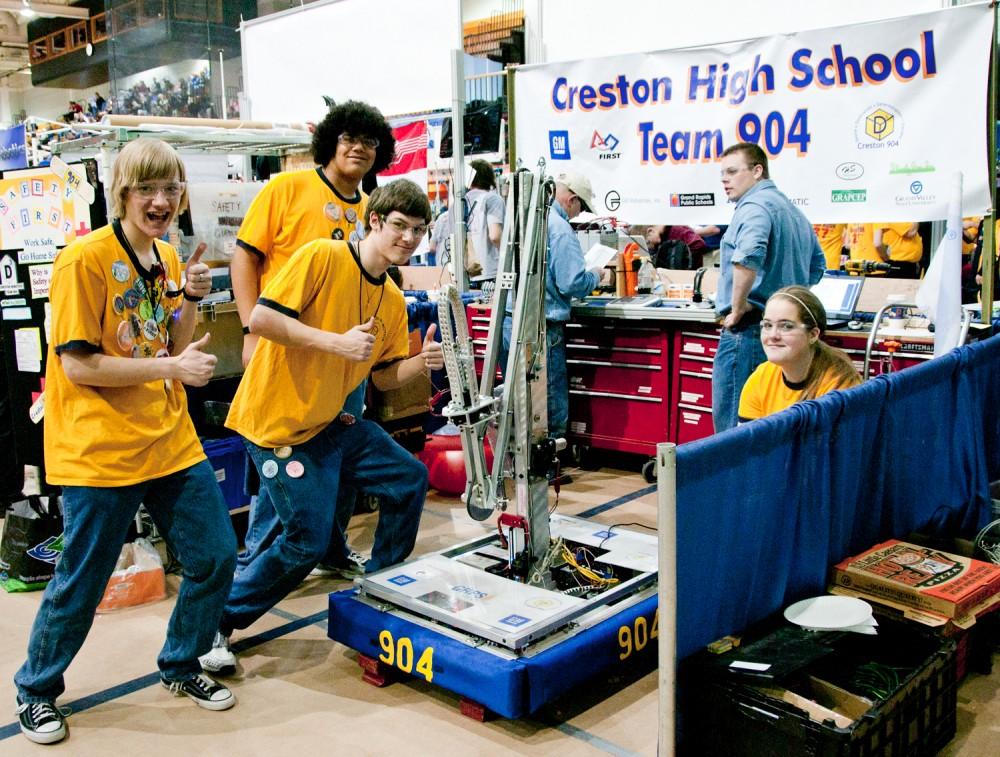 With people cheering from the bleachers and various high school mascots running around to keep the crowd entertained, the upbeat atmosphere inside of the Grand Valley State University Fieldhouse Arena felt more like a rock concert than a science competition.

GVSU hosted the For Inspiration and Recognition of Science and Technology (FIRST) Robotics Competition from 8 a.m. to 6 p.m. on March 18 and 19. Forty high school robotics teams from around the state competed with more than 1,000 participating students.

Founded in 1989 by inventor Dean Kamen, the purpose of the FIRST Robotics Competition is to allow students interested in engineering and technology to get hands-on experience while solving real-world problems.

Each year, the competition sets a new task for the robots to accomplish. For this year’s game, the robots had to successfully hang up three inflatable tubes – a triangle, a circle and a square – onto various poles. There were nine poles consisting of three pegs per pole, with the highest pole reaching 110 inches and the shortest standing at 76 inches.

“The higher the tubes are placed on the poles, the more points they’re worth,” said Marc Reigler, a freshman competitor from Fremont High School.

Each match began with a 15-second autonomous period in which the robots had to independently hang up tubes to gain extra points. Once the autonomous periods ended, the games lasted for 2 minutes and 15 seconds.

“Our robot has a base and a big claw that can move back and forth, which enables it to easily pick up the tubes,” said Sagar Patell, a senior at Troy High School and president of his school’s robotics team.

Participating high school teams were comprised of students interested in robot-building. The teams had six weeks to design, build and program their robots. Each team was provided with a common kit of parts, but they could also purchase additional parts from outside sources.

“Most of our other materials were either purchased online, at local hardware stores or metal suppliers,” said Wayne Tembrink, an engineer at Kaydon Bearings and a mentor for the Fremont High School robotics team.

On Saturday, teams from Forest Hills, Fremont and Creston won the district competition at GVSU. The teams will advance onto the State Championship games, which will begin on April 7 and end on April 9 at Eastern Michigan University in Ypsilanti, Mich.