Where are they now? A glimpse at former Lakers in the NFL 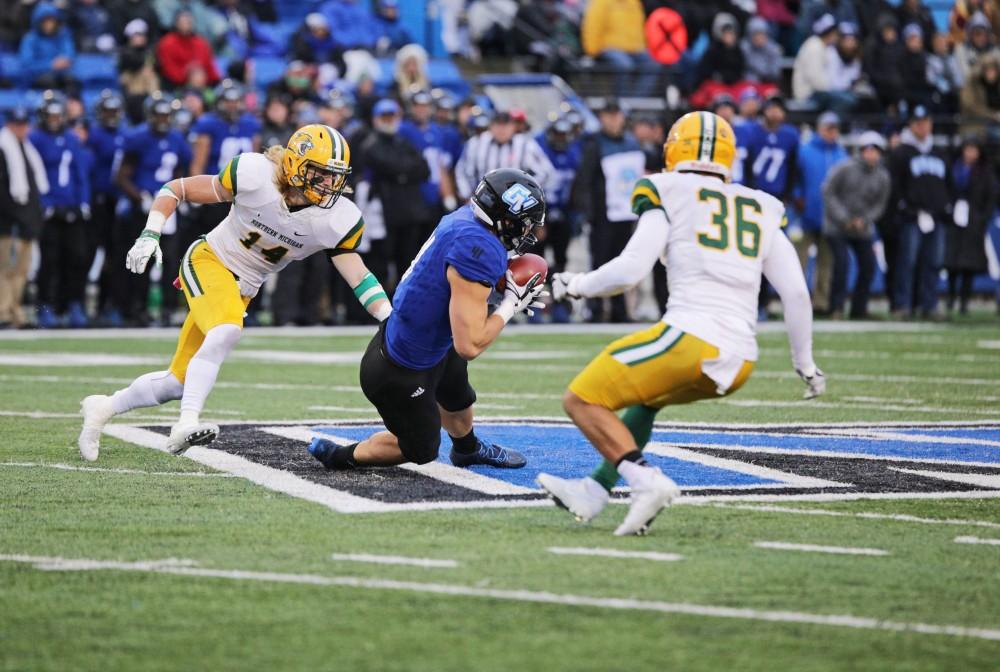 As the NFL season gets closer with each coming day, many rookies are looking to prove themselves and earn a spot on an NFL roster. Among those rookies, a few former Grand Valley State football players are looking to establish themselves, whether it’s as a starter or just simply making a team and achieving their dream.

Making the NFL seems like a mere prayer for a lot of Division II players. According to Wayne Cavadi of NCAA.com, at this time last year, there were only 90 former Division II players on NFL rosters, with four of them hailing from GVSU. For reference, each NFL roster is allowed 52 players with 32 teams total. That’s 1,664 players.

Since the odds are so slim of Division II players making it to the next level, the guys who have made it have worked extremely hard to get to where they are today.

When it comes to hard working former Division II players, look no further than linebacker Matt Judon. After an impressive career as a Laker, Judon has proven to be a vital contributor to the Baltimore Ravens defense, racking up 62 total tackles and 12 sacks since joining the team in 2016.

Future hall-of-fame Terrell Suggs isn’t getting any younger. The Ravens have been looking all offseason for a linebacker to carry on his legacy, and Judon may be that guy. He showed flashes of potential in a preseason win over the Rams, posting two tackles and a sack in the 33-7 victory.

After getting through two years in the league, that third year is when a many players tend to find their groove and excel in their roles, so look for Judon to wreak havoc in AFC North backfields this season.

Judon isn’t the only former Laker who has carved out a solid pro career for himself in the NFL. Cornerback Brandon Carr is entering his eleventh season in the league and has been a key cog in the secondary for the Kansas City Chiefs, the Dallas Cowboys and most recently with the Ravens.

Even though he has never been a star in the league, Carr has always been a reliable contributor, totaling over 500 tackles, 19 interceptions and nine fumble recoveries in his veteran career.

Carr holds a very impressive streak in the league as he has started 160 consecutive games which is currently the second-longest active starting streak in the NFL.

With the emergence of young corners Jimmy Smith and Marlon Humphrey, Carr’s starting streak will likely end this season. However, he is at peace with it, accepting his new role and proud of the progress the young guys have made.

While Carr is secure with his place in the league, many undrafted rookies are looking to prove themselves for the Ravens. One of those players is tight end Nick Keizer.

Considered one of the best tight ends to play for the Lakers, Keizer is currently trying to earn himself a spot with the team. After a signing a contract with the team in May, Keizer is fighting to be the third or fourth tight end on the roster, with a potential spot on the practice squad looming.

Although he didn’t play in either of Baltimore’s two preseason games, Keizer has been performing well in seven-on-seven drills in practice and still has a chance to secure a roster spot come September.

These three former Lakers are simply chasing their NFL dreams in Baltimore, and it will be interesting to see how their roles evolve as the season progresses. No matter what happens, they have worked hard to be where they’ve gotten today.