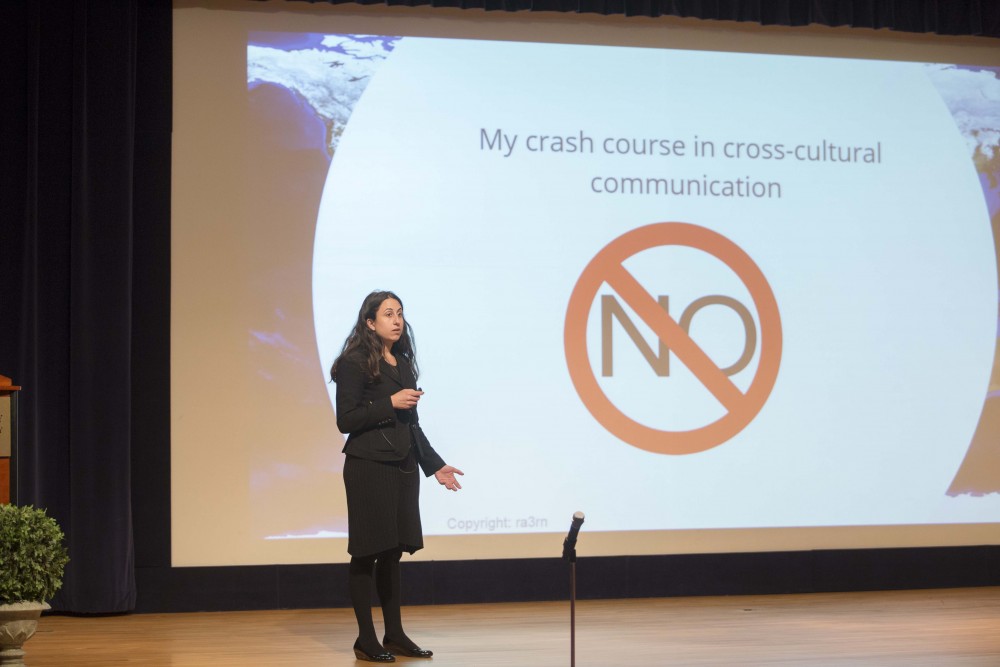 GVL / Sara Carte Kara Alaimo, assistant professor at Hofstra University, speaks about her new book, “Pitch, Tweet, or Engage on the Street: How to Practice Gloabl Public Relations and Strategic Communications” at downtown’s campus on Feb. 13.

One of the challenges of being part of a global economy is learning how to communicate internationally with people from different backgrounds and viewpoints. Given the variety of cultures, languages and social standards in this diverse world, communication challenges can arise for several reasons during engagement with people from different countries.

To address global relations and strategic communication practices, Kara Alaimo, an assistant professor at Hofstra University, spoke at Grand Valley State University Monday, Feb. 13, as part of the “APR Speaker Series” hosted by the advertising and public relations program. During her presentation, she discussed her book, “Pitch, Tweet, or Engage on the Street: How to Practice Global Public Relations and Strategic Communications.”

“Since the 1990s, international PR professors have been teaching their students the generic/specific theory of international PR,” Alaimo said. “According to this theory, if you are going to practice PR in a new country or culture, you need to ask five questions and adapt your strategy accordingly.

“You need to learn about the local political-economic system, about the culture, about the extent of activism locally—so how likely people are going to take to the streets to protest you—the local economic development and also the media system.”

Alaimo stressed the need for future business professionals to be well-informed about the culture, climate and social norms of the country they will be working with during her “crash course in cross-cultural communication.”

Tim Penning, a professor of advertising and public relations and the coordinator of the program at GVSU, said having Alaimo speak at the APR-based event cemented the significance of adapting public relations tactics and strategies at a global level.

Formerly the head of communications for the United Nations Secretary-General’s High Level Panel for the Post-2015 Development Agenda, Alaimo was also appointed by President Barack Obama as spokesperson for international affairs in the U.S. Treasury Department, where she presided over the administration’s global economic diplomacy initiatives.

Alaimo said there were 10 cultural clusters that break up the world. This concept is the central topic in her book, which uses data taken from interviews with 87 public relations professionals in over 31 countries.

“Previous researchers wrote the world’s people into 10 different cultural groups,” Alaimo said. “This was done as part of the globe study, which was a 10-year study by 170 researchers around the world, and so I used these designations in my book.”

Taking the audience on a “quick tour of the world,” Alaimo compared the different clusters—which ranged from Latin America, North Africa, and Sub-Saharan Africa and the Middle East—and discussed how to adapt public relations messages and/or strategies for each cultural cluster.

“Here in the United States, in order to maintain your reputation, you essentially try to avoid embarrassing yourself in professional or social situations,” she said. “In Asia, there is another side to the concept of face, and it means that it is deeply embarrassing to you as an individual to put someone else in a position to be embarrassed in your presence.

“So, what that means is that you never spend a meeting to tell a person that you are deeply disappointed with them because that would entail the loss of face for that person and that organization, but also for you. So, you are concerned about protecting your own reputation, but also that of everyone else who is in your presence.”

Becky Thomason, a GVSU student with an emphasis in public relations, asked Alaimo during the Q&A portion of the event about working with media companies in different countries in order to get a company’s message out to the public.

“I was wondering, what does pitching of your story look like to those influencers if it is not a news release or press release?” Thomason asked.

Alaimo said when an individual is working with local or prestigious media influencers in another country, research is key because there are some areas in the world, like South Africa, that are so diverse that there is more than one official language in the region.

“You can’t have one or two PR strategies that work for the whole country,” Alaimo said. “You really have to micro target communities. What you’ll find in South Africa is that PR firms will actually figure out who the cool kids are in a particular township.

“This kid may not have any money, but he or she serves as an influence over the other teens in the community.”

For more information about Alaimo and her work, visit www.karaalaimo.com.