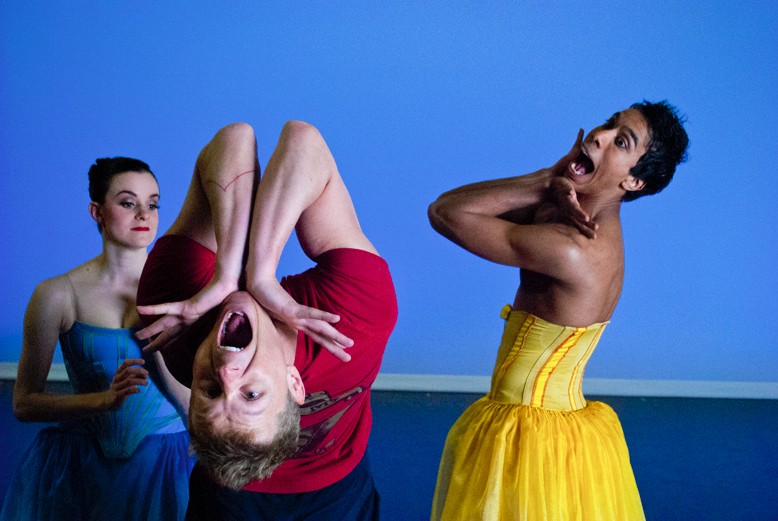 The Grand Rapids Ballet Company is collaborating with Grand Valley State University for “Movemedia”, a two-concert series with its first set of performances kicking off this weekend.

Movemedia is a contemporary attempt to combine programs and styles, and also showcase the balletic talents of six individual choreographers.

“It’s all about world premieres and innovations in the world of dance,” said Movemedia performer and advocate Dale Schriemer. “Why shouldn’t singers and dancers and visual artists be working together?”

Schriemer is the artistic director of Opera Theater at GVSU and is singing the German “Rueckert Song” in Movemedia’s second weekend of performances. He says the Grand Rapids, GVSU collaboration is very important.

“Two goods make a better,” Schriemer said. “It is an opportunity for both parties to have a greater impact… Part of this University’s mission is to educate and entertain.”

“I think our relationship has emerged since my arrival (at the Grand Rapids Ballet Company),” said Barker.

She calls Movemedia an enhancement of body and space.

This is not company’s first collaboration with GVSU, and judging by Barker’s praise of the GVSU’s theater department, it will not be the last.

“Grand Valley promotes the arts in many, many ways, and the culture of art,” Barker said. “Grand Valley has proven works… At Grand Valley you have many professors that are still working in their industry as performers as choreographers, as artists.”

GVSU professor and Movemedia choreographer Shawn T. Bible is an example of an educator honing his craft outside the classroom. His piece “Why We Write” will premiere this weekend.

Bible’s work is a social comment on the waning medium of written word, and how the loss of the natural practice of touching ink to paper carries consequences.

“If you lose the ability to handwrite because of all this technology, you lose your individuality,” he said.

Bible is a skilled contemporary choreographer, and his shift toward ballet dancing in this weekend’s performance is meant to capture the spirit of innovation Movemedia seeks.

“The dancing looks like the fluidity of a pen,” said Bible. “To me handwriting is very beautiful… Nobody has the same signature.”

Bible calls this weekend’s collaboration a big deal for GVSU choreographers, and certainly it’s a large step forward for GVSU, Grand Rapids and West Michigan as a whole.

Schriemer said Movemedia is about the value that exists in culture.

The first series of Movemedia is this weekend, March 23 and 24, with a second series of performances to follow on April 6 and 7. The event takes place in the Peter Martin Wege Theater located on Ellsworth in downtown Grand Rapids. Tickets are only $10 for students. For more information visit grballet.com/movemedia.

The innovative works of six great artists are presented by the Grand Rapids Ballet Company in MOVEMEDIA during two weekends: March 23-24 and April 6-7, at the Peter Martin Wege Theatre. Tickets may be purchased as a two weekend set for $40, or individually for $25 ($10 for college students). Tickets went on sale February 20 and are available at the Ballet Box Office or Ticketmaster. For specific information on each weekend’s lineup, visit grballet.com/movemedia. The Peter Martin Wege Theatre is located at 341 Ellsworth SW in downtown Grand Rapids.