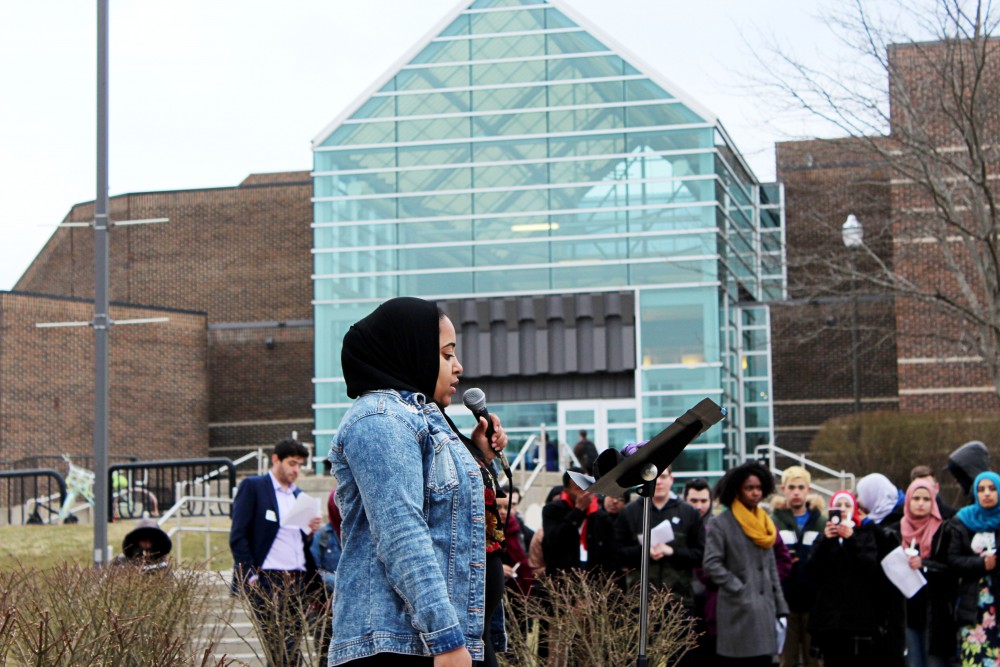 Grand Valley State University’s Campus Interfaith Resources and Muslim Student Association (MSA) held a vigil March 21 beside the Cook Carillon Tower to honor the 51 lives lost during the Christchurch, New Zealand terrorist attack nearly a week prior. Students, faculty and community members listened to speakers, held a moment of silence and supported each other through the attack on the Muslim community.

MSA President Maisha Sharif said that the lives lost in the attack included Muslims in their vulnerable state of Friday prayer.

“Although words can never begin to explain the amount of emotion we feel during this tragic event, no amount of words are enough to condemn this heinous act against innocent lives,” Sharif said. “It is also impossible for us to remain silent and mute.”

The event features speakers from MSA and others campus Muslims. Mohamed Abdirahman told the crowd about when he learned the story of a three-year-old child killed in the shooting as he was attending prayer with his father and older brother.

“At a young age, I grew up around the mosque a lot — my dad would bring me in,” Abdirahman said. “You’d walk in there and you would expect that my dad doesn’t have to worry about me… To walk in with your father and for the father to just walk out with his older son, nobody should have to go through something like that.”

Also at the vigil were members of AEPi, the Wesley Fellowship, Calvin Interfaith and Campus Interfaith, who read the names of those killed in the shooting. AEPi brother Ben Friedman, who previously spoke at the Pittsburgh attack vigil in November, recited other attacks on religious communities in the past seven years.

Speakers also included Provost and Executive Vice President for Academic and Student Affairs Maria Cimitile, who spoke about her admiration of New Zealand’s prime minister, who both supported the community and took actions to prevent another attack. These actions set an example, as she said the community needs to take more steps now compared to following tragedy in the past.

“When I was in college 35 years ago, we called for tolerance; that was a huge step for that era,” Cimitile said. “But it is so not enough today. We must choose knowledge. We must choose understanding of all cultures, of all religions of all practices. It is only then that we will get to what makes us all human and to understand the value of human life.”

Following a moment of silence, Imam Morsy Salem recited a portion of the Quran, recalling verses that encouraged prayer, patience and community. He also told a story about an old man who tried to teach his sons a lesson during the final hours of his life.

“(The old man) gathered all of them and he gave each one of them one stick and told each of them to (break it),” Salem said. “Everyone… broke it easily. He brought other sticks together, in one group, and he gave it to each of them. They couldn’t (break it). This is my lesson for all of you today: if you stay together, no one will be able to break you.”

Sharif said that if she could impart one message with the campus community, she would encourage students to reach out to GVSU’s Muslim community and learn about the faith. MSA has certainly felt the overwhelming support so far, she said.

“It really meant a lot to us that there were so many people from so many different practices (and) religions came out, especially in this cold,” Sharif said. “This is what we need: for people to come together despite all of our differences.”