“The Theory of Knowledge” 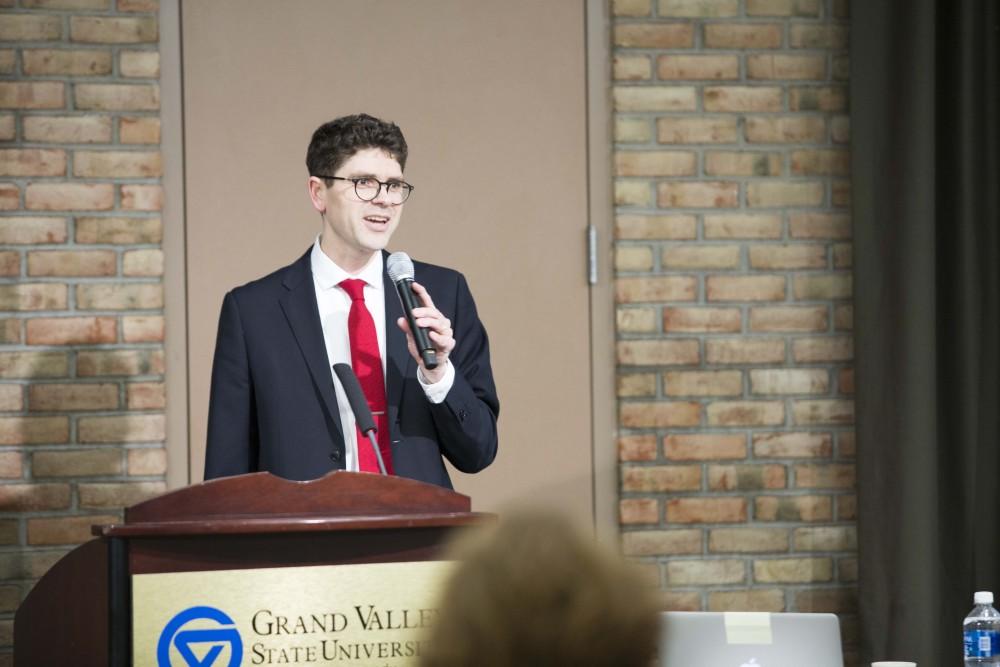 How people form beliefs and separate fact from fiction was the baseline of “The Theory of Knowledge: Epistemic Pornography and Epistemic Poison” lecture given by Andrew Spear, an associate professor of philosophy at Grand Valley State University, in the L.V. Eberhard Center Tuesday, Feb. 7.

Rolling with his coin toss example, Spear made sure to mention the only way the audience could ensure their guess was right was through direct observation: looking at the coin directly after the flip. Still, direct observation has its limits, just as human beings have theirs.

“Direct observation is a good way of forming beliefs, justifying your beliefs,” Spear said. “I want to suggest that were that the whole story, we shouldn’t have many disagreements at all, and it shouldn’t be too hard to decide what to believe. But that’s not the way it works.”

Due to limitations on direct observation such as time and space, perception and illusion, generalizations, and unobservable forces and entities, everyone has different beliefs and viewpoints on a range of different topics. Each individual will have particular beliefs depending on their experiences and perceptions. These interconnected sets of beliefs make up how we see the world—what Spear describes as a worldview.

“Many beliefs cannot be established by direct appeal to experience,” Spear said. “Yet we have this whole worldview in the background that we do want to try to have some justification for. Worldview is always in the background, and we are always picking our way through it.”

Spear drove home the point that with all of the different media outlets and the accessibility of a search engine today, it’s not difficult to find the testimony you are looking for. No matter what someone believes, they will always be able to find testimony to back up those beliefs.

“Epistemic pornography presents claims as unconditionally true on the basis of evidence that is presented as argument-ending with no alternative hypothesis,” Spear said.

Spear said people rely on testimony given by other individuals, groups and organizations to form their own beliefs, but he said people should not let these non-epistemic factors influence how they view the world. He said doing so could lead individuals to form beliefs on the wrong kinds of evidence.

“You and I believe that we are doing all of this reasoning by ourselves, but that is never how it is,” Spear said. “We are taking the testimony of others as the basis for forming a large number of our beliefs. (We) believe it because other people have told us.”

This event was the first in a series of five talks titled “Back to Basics: The Liberal Arts and Sciences as Common Ground for Meaningful Engagement,” which allow faculty members in the liberal arts and sciences to apply some part of their field to cultural issues or current events. The talks will be ongoing throughout the semester.

Professor Gretchen Galbraith, associate dean for faculty resources and scheduling in the College of Liberal Arts and Sciences, emphasized the importance of these talks at the beginning of the event.

“Collectively, (the five talks in this series are) an evocative sample of the many rich disciplines (across) Grand Valley State University,” Galbraith said. “They serve specific extensions of the common drive to understand the human condition and what humans have brought into the world.”

Co-sponsored by the Hauenstein Center for Presidential Studies, the Koeze Business Ethics Initiative at the Seidman College of Business, the GVSU philosophy department and the College of Liberal Arts and Sciences, these talks allow students to engage with the speaker in looking at current events in a different way.