“Beyond the Paris Accords” 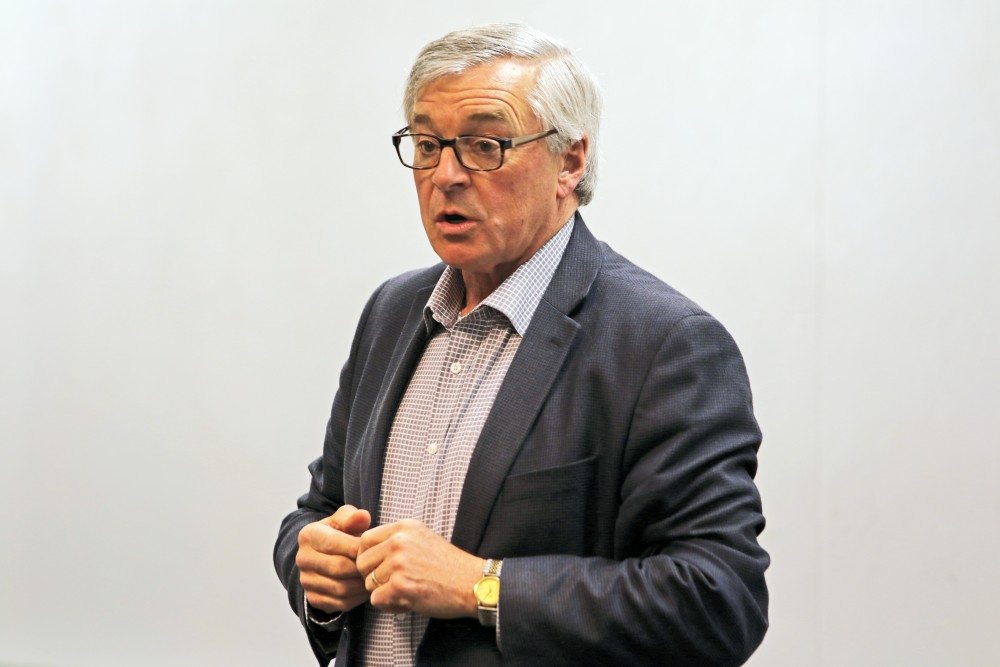 GVL/Hannah Zajac - George Heartwell, a member of President Obama's Climate Change Adaptation Task Force and of the American Bar Association Task Force on Sustainable Developement, gives a presentation on adapting to climate change to a group of GV students on Tuesday, Feb. 21, 2017.​

George Heartwell, former mayor of Grand Rapids, came to Grand Valley State University Tuesday, Feb. 21, for an event titled “Beyond the Paris Accords: Adaptation Planning and Local Government.” He spoke about his role in dealing with climate change at the local level, specifically as mayor.

Heartwell served as mayor from 2004 to 2016, and during this time he was appointed by the Obama administration to help develop strategies for U.S. cities to deal with climate change. He also attended the Warsaw and Paris climate change conferences to represent U.S. mayors.

In his presentation, Heartwell said he developed an environmental task force to help combat climate change back in 2004. He talked about the environmental initiatives he has helped start up in West Michigan, and the partnerships his administration had with many Michigan colleges.

He described the present dangers of climate change and what would happen if it’s ignored.

“We’re living on a planet whose ecological architecture has evolved to a level of intricate interdependencies of plant and animal life,” Heartwell said. “Destroy any one element, lose any single species, and a complex chain of events is launched, a sort of death spiral, that affects a host of other related species.”

Heartwell has visited several universities in Michigan and across the country, such as the University of Michigan and Calvin College, addressing climate change and how it affects the environment, history, science, laws and politics.

During the Bush presidency, when former president George W. Bush pulled the U.S. out of the Kyoto Protocol, many U.S. mayors rose up against the president’s declaration that climate change was not a priority of the U.S. or that it didn’t exist, Heartwell said. He said mayors in particular are responsible for the well-being of their citizens, and climate change is an occurrence that has a direct influence on people’s lifestyles.

“The president didn’t have to figure out how to stretch an already tight municipal budget to fund infrastructure improvements to protect against floods, but that’s what mayors must do, what mayors are expected to do,” Heartwell said.

Mayors across the U.S. signed an agreement, similar to the Kyoto Protocol, that called for the reduction of greenhouse gas emissions into the atmosphere to slow the warming of the earth’s temperature.

Heartwell said he was the 123rd mayor to sign the climate protection agreement of U.S. mayors when he took office in 2004. Today, there are 1,060 signatories to the agreement.

“No mayor will cave to the federal government if they feel their citizens are at risk,” Heartwell said.

In an article published by Reuters, the Trump administration said it plans to roll back a series of environmental regulations set by former President Barack Obama concerning coal manufacturing on federal lands and greenhouse gas emissions.

Despite the rollback, Heartwell said he is still optimistic. He said the “juggernaut” of American resistance against Trump has been “unleashed.”

“People are ready to take to the streets to resist environmental tyranny,” Heartwell said.

Kenneth Piers is a member of the Citizens’ Climate Lobby, which tries to work with Congress to create a carbon fee and dividend policy on fossil fuels. He has worked as a chemistry professor at Calvin College since 1968 and began his teaching on climate change during the 1980s. He said while climate change is based on science and evidence, climate change denial is completely manufactured by the oil industry and big money and has no evidence supporting it.

Piers said the climate science community is nearly unanimous in saying climate change is real and the human race has very little time to turn things around.

The geography and sustainable planning department at GVSU, and more specifically the “Global Environmental Change” class taught by professor Elena Lioubimtseva, hosted Heartwell’s visit. Lioubimtseva said she’s met Heartwell in the past and still follows his work on climate change. She said he is one of many well-known experts on climate change.

“It’s a very important topic of conversation, and I think Heartwell is one of the best people to engage and inspire students and really encourages us to think about what really needs to be done,” Lioubimtseva said.

The event was attended by many of Lioubimtseva’s students, but other community members, members of local government, environmental groups and students who came out of general interest attended the event as well.

Heartwell said he hopes students understand the urgency of climate change while still having hope for the future.

“In spite of what the administration is doing right now, there is an irreversible movement that’s underway in this country, and there’s nothing President Trump can do to turn that around,” Heartwell said.