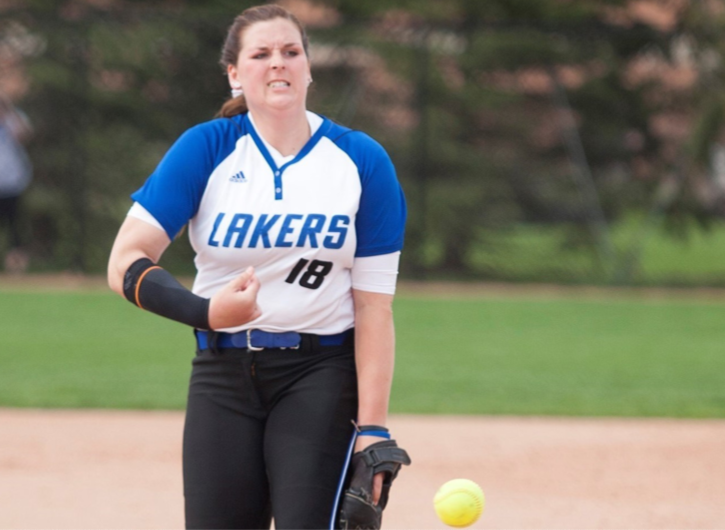 No. 10 GVSU travelled to Cedarville, Ohio to take on the No. 19 Cedarville Hornets in a clash of two teams who have been playing a high level of softball over the past few weeks. Going into the doubleheader, both Cedarville and GVSU were 8-1 in their last nine games.

Game one featured an elite pitching matchup between GVSU senior Allison Lipovsky and Cedarville senior Morgan Arbogast. Both pitchers went the distance for their clubs, but Lipovsky prevailed in dominating fashion as she threw for 14 strikeouts and two walks in her first no hitter of the season and third overall for her career in the Lakers 1-0 win.

While Lipovsky has strung together some impressive individual accolades in her career at GVSU, she said her only priority is to put her team in the best position possible to win games out on the diamond.

“I’ve been working really hard to be where I am now because the better I can be, the more successful my team is going to be,” Lipovsky said. “It’s great to be recognized for your own hard work, but really I just want to make sure my teammates and I have the most successful season possible.”

The difference for the Lakers in game one came from junior infielder Kelcie LaTour as she delivered what turned out to be the game winning RBI single in the top of the sixth inning. Nikoma Holmen and Shannon Flaherty also provided two hits apiece.

“We hit the ball well both games,” said GVSU head coach Dana Callihan. “But we just couldn’t string it together in the first,”

In game two, GVSU’s bats came alive behind yet another dominant pitching performance, this time from sophomore Hannah Beatus. The Lakers went off and strung together 13 hits in a 10-0 mercy-rule victory as Beatus delivered a five-inning shutout where she struck out six while only giving up two hits.

Callihan noted that when GVSU hit in game two, they came in bunches and the Lakers were able to capitalize on their opportunities, unlike in game one.

“The second game, we were able to put some innings together and go back to back on and scored some runs,” Callihan said.

“We try to stay focused with every opponent, but this team loves the challenge,” Callihan said. “They are very hungry right now.”

Lipovsky also feels that the talent of this year’s softball team is better than any of the teams she has played on previously.

“I think that we have a better team chemistry but all around this is by far the best team I have ever played on, athletically and chemistry wise,” Lipovsky said. “Up and down the line up people hit the ball and hit it hard.”

Lipovsky felt that her team should not become complacent and instead focus on continuing to improve overall as a group.

“To keep things rolling we just have to keep our bats consistent and making adjustments in the box,” Lipovsky said. “But we also have to continue to work hard in the circle as a pitching staff and get our job done to make it easier for our team to come out on top.”

Up next the Lakers will face Saginaw Valley State in Saginaw, Mich. in their first conference matchup of the season on Wednesday, March 20 at 3:30 p.m.