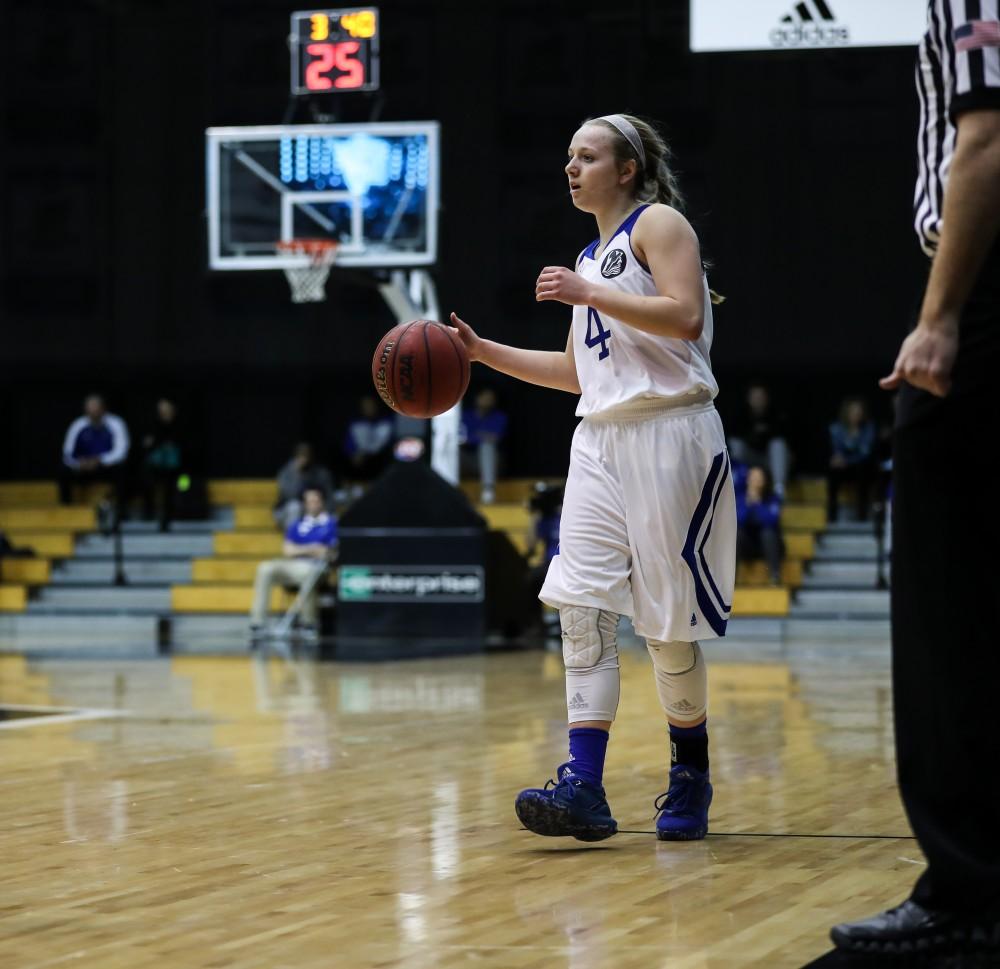 Jenn DeBoer (4) controls the ball and looks to pass during the game vs. Northwood inside the Fieldhouse Arena in Allendale on Thursday, Feb. 9, 2017.

The Grand Valley State women’s basketball team was dominant on the courts to start off the season against Maryville University on Friday, Nov. 10, and against University of Missouri-St. Louis on Saturday, Nov. 11, in St. Louis, Missouri.

GVSU defeated the Saints of Maryville with a convincing 85-67 victory to bring their overall record to a season-opening 1-0. The Lakers had a slow start to the game, ending the first quarter down 23-17, but quickly shifted their offensive game plan to begin attacking the rim for the remaining three quarters.

The Lakers managed to take a 41-37 lead against the Saints during the second quarter of the game, which ultimately led GVSU to outscore Maryville 26-15 and 18-15 in the second half.

Sophomore Jenn DeBoer led the Lakers in scoring as she secured 17 points on 7 of 12 shot attempts while also hitting three shots from behind the arc. Junior Natalie Koenig scored 14 points and picked up five assists in 25 minutes. Junior Taylor Parmley managed to score 14 points, as well, while leading the Lakers with nine rebounds. Senior Korynn Hincka, meanwhile,  scored 13 points. Hincka shot 5-5 from the field, including hitting all three of her 3-point attempts.

“Offensively, we made shots,” Williams said. “I thought we pushed the ball forward. I thought our tempo was good. It got us some easy shots and transition.”

First-game victories are not unusual for the Lakers, who have now opened up five straight seasons with a win. But the winning didn’t stop there, as GVSU followed its victory against Maryville with a win over the Tritons in St. Louis.

Unsurprisingly, the Lakers were able to set game-high records. Koenig helped the Lakers with a game-high of 21 points, making her the top scorer. Koenig also grabbed three rebounds while gaining an assist. DeBoer picked up 11 points in the game and claimed three rebounds. DeBoer shot two free throws in the last few seconds of the game, resulting in GVSU’s final 3-point lead.

Parmley secured 8 points while gaining a team-high nine rebounds. Boensch shot from both the field and the free-throw line to pick up 9 points, while Hincka made 8 points and five rebounds.

The Lakers shot 56 percent from the field the first game and managed to convert 48 percent of their shots in the second game. Another positive result was the fortification of the teammates’ relationships.

“I think two things,”  Williams said. “I thought we showed we can play with good teams on the road, and I thought the first game we got down by like 13 or 14 early, and I thought our players bounced back, so I felt we played decent adversity.”

Of the second game, Williams described a different type of adversity.

“And then second game the basket broke, so we had to go and play in a different gym, which was 30 minutes away,” Williams said. “So we played through a little bit of that adversity, which (was) kind of cool as well.”

The Lakers have a few days to rest before hosting the University of Indianapolis in the home opener Friday, Nov. 17, at the GVSU Fieldhouse Arena.