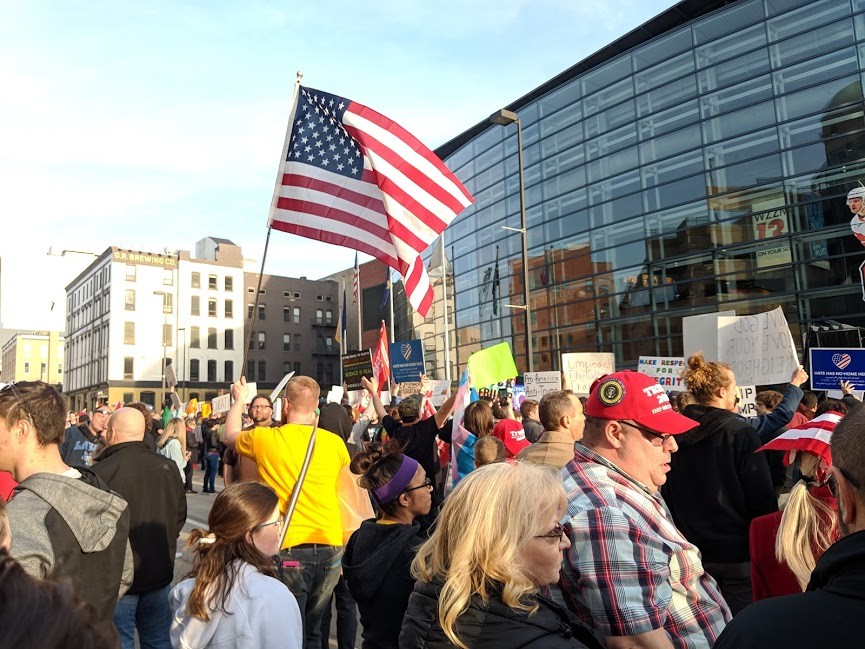 Tens of thousands of Michiganders flocked to Grand Rapids to attend President Donald Trump’s first “MAGA” Rally of his 2020 campaign. The visit marks Trump’s second rally in Michigan following his victory of the state in the 2016 election.

During his address to a packed Van Andel Arena, Trump tailored part of his messaging to Michigan, specifically noting the growth of the automotive industry in the state and the upcoming construction of new Soo Locks, which connects Lake Superior to the lower Great Lakes. He also delivered “breaking news,” which included a promise to fund the Great Lakes Restoration Initiative.

“I’m going to get — in honor of my friends —full funding of $300 million for the Great Lakes Restoration Initiative, which you’ve been trying to get for over 30 years,” Trump said. “So, we’ll get it. It’s time.”

The promise has received both support from Michiganders as well as outside flak, with many citing that Trump’s fiscal year 2018 budget plan didn’t include the $300 million in government support that the initiative has received for the past seven years.

Those in attendance came from all over the Midwest to see the president, including Kaitlin Bennett, known as the “Kent State Gun Girl” for her pro-gun activism.

Bennett spoke with Grand Valley State University students Hannah Swain, Trevor Hubert and Madison Wehby in Rosa Parks Circle while engaging with protesters. With a public personality in engaging with people who have radically different political views, Bennett said her first trip to Michigan was to attend Grand Rapids’ protests.

“I wish there were more people here (in Rosa Parks Circle),” Bennett said. “Grand Rapids, you’ve got to up your anti-Trump game. This is pretty sad, as Trump would say.”

Guests also traveled from the surrounding area, including Allendale. GVSU freshman Ted Ames and sophomore Jack Thayer traveled downtown at 2:30 p.m. to wait in the line to enter Van Andel Arena, which spanned just over a half a mile prior to arena doors opening at 4 p.m.

“It’s comforting to know that you’re not alone,” Ames said. “The camaraderie out here is phenomenal. We’ve gotten a lot of love from a lot of people.

Thayer said he expected Trump to talk about running for president in 2020 and the fallout of the Mueller investigation, of which a summary was released March 24. Above all else, Thayer said that the unity of attending the event was a highlight, with waves of supporters standing together.

“Mainstream news wants you to think that Trump supporters are all hateful,” Thayer said. “They make you feel bad about yourself, but as far as I can see, everybody is peaceful.”

GVSU’s College Democrats were also downtown for the rally, but Vice President Austin Marsman said that it was to send a different message. The College Democrats protested in Rosa Parks circle alongside peers from Kent County and Michigan’s Democratic groups.

Marsaman said that he was protesting the lack of civility revolving around the presidency, the president’s support of Betsy DeVos and, most importantly, a lack of action involving climate change.

“We’ve seen the studies that tell us what is going on, yet President Trump and his administration have done little to nothing to combat climate change,” Marsman said. “This issue hits our generation the hardest and instead of denial, our leaders should be debating the best way to address it. Whether that’s the Green New Deal or something like it – we must act.”

The Lanthorn reached out to GVSU’s College Republicans for comment but have not heard back. The group volunteered downtown in support of the president’s visit.