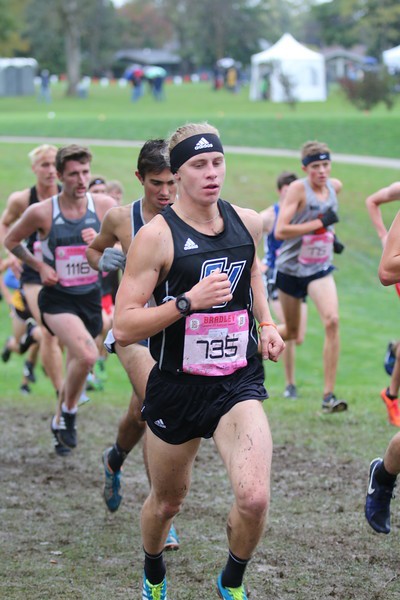 “There are fierce powers at work in the world, boys. Good, evil, poor luck, best luck. As men, we’ve got to take advantage where we can,” once said Matthew McConaughey in the 2012 drama-crime film titled “Mud”. The weather was that fierce power on Friday, Oct. 12 in Peoria, Ill. at the Bradley Pink Classic for Grand Valley State Cross Country.

The GVSU men finished second and the women took fourth in weather that produced snow, rain and temperatures that never even hit the 40s. The day saw course conditions go from wet to mush to mud as time progressed.

In far from ideal conditions, Zach Panning and Enael Woldemichael finished first and second for the fourth consecutive race for the Lakers, who were narrowly defeated by Bradley University from the Missouri Valley Conference, 83-63. After Panning and Woldemichael, Tanner Chada turned in his best performance to date. Chada finished 15th and posted an 8k time of 24:57.9. Jacob Domagalski and Ben Zaremba rounded out the top five runners for the Lakers, finishing 32nd and 33rd.

On the women’s side, Allie Ludge, Sarah Berger and Gina Patterson all turned in solid performances for the Lakers, finishing seventh, 10th and 17th respectively. Madison Goen, the 2017 GLIAC Freshman of the Year, finished 33rd. Hanna Groeber rounded out the top five for the Lady Lakers finishing 96th.

In combination with course conditions and a cramped starting box, head coach Jerry Baltes said getting out of the gates was a difficult task.

“Our top four did a really good job of getting out and establishing position, but yeah, it was a pretty large field today,” Baltes said. “So there were a lot of bodies in a small, cramped space that made it pretty hard for some of our girls after our top four to get out and get going.”

Ahead of the Lady Lakers were Illinois, South Dakota and Iowa State, who ran away with the field having their top five runners finish from first to 22nd.

In addition to the men’s and women’s races, there were also two additional open co-ed race for runners to compete in. On the men’s side, GVSU’s Colin Herrmann won the men’s co-ed race with a time of 25:25. Rachel Walters finished second in the women’s open co-ed with a 6k time of 22:16.

The Bradley Pink Classic marked the last regular season meet of the year for the GVSU cross country program, who now look forward to the post season starting in two weeks with the GLIAC conference championship meet.

Moving forward, Baltes wants to focus on two goals with his men’s and women’s team: pack running and getting healthy for the home stretch as they approach their most important competitions of the year.

“We were still yo-yo’ing today,” Baltes said, “and we need to focus on getting better at (pack running), but at the same time it’s hard to do that in a race that features so many teams. The next two races won’t be as compacted so we should be able to focus and hone on that.”

The Bradley Pink Classic featured 25 men’s and women’s teams and five total races which contributed to worsening conditions as the day went on.

“We have two weeks, two weekends off before the GLIACs,” Baltes said. “So moving forward, our focus is to first get as healthy as we can, and second, get in a great two weeks of practice to be as prepared as we can be to be successful in the near future.”

The Lakers next meet is the GLIAC Conference Championship on Saturday, Nov. 3 at 11 a.m. at Calvin College.