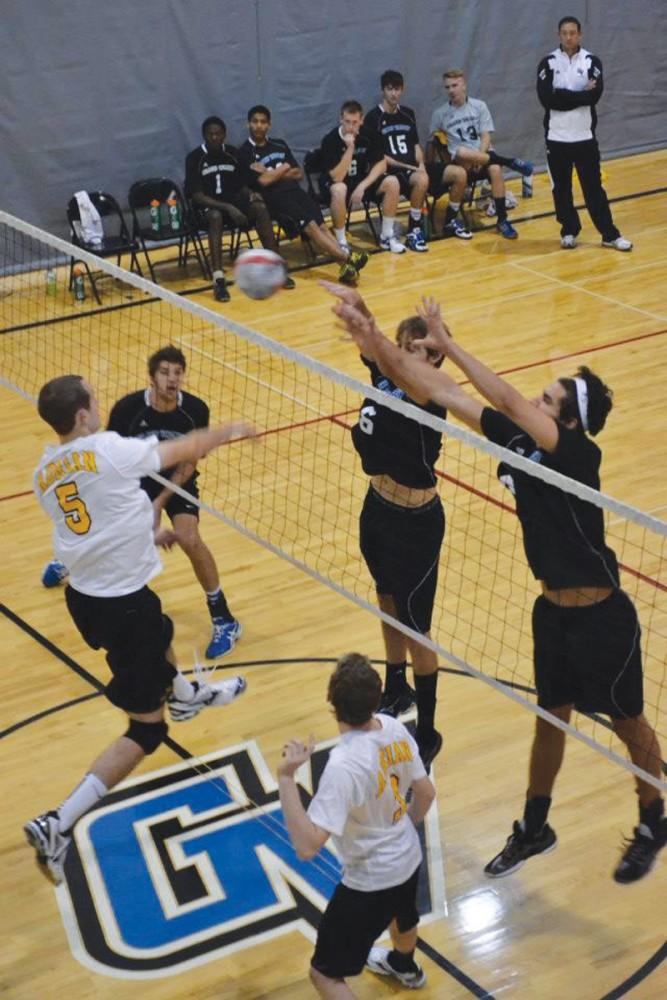 The Grand Valley State University men’s club volleyball team may not have the experience to win a national championship, but they certainly have the size.

In a sport where height can be the determining factor in a match, GVSU towers over their opponents.

“We’re a big team,” said GVSU sophomore Mike Marciniak. “A big part of men’s volleyball is controlling the net, and starting with our front row, we have three guys that are 6’7”. Our height gives us a huge advantage when it comes to blocking and attacking.”

With three freshmen in their starting lineup, GVSU experienced some growing pains in 2012. Returning players had to adjust to new positions last season, and the end result was a team that didn’t live up to their expectations.

“We don’t have the luxury of (men’s) high school volleyball in Michigan,” Allen said. “When you’re in those crunch time situations, most often the teams that win are the ones with experience. We lack muscle memory in those situations.”

Allen said he isn’t sure what to expect this season, as the team’s lack of experience resulted in inconsistent play last year.

However, the inconsistency hasn’t affected the team’s confidence.

“We can be streaky,” Marciniak said. “We don’t always play our best, but we know we have the potential to compete with anyone in the country. We feel like we can win a championship.”

The team will rely heavily on senior leader Kyle Wright this season, who was a part of the 2009 team that tied for ninth in the country at the Collegiate Club Volleyball Championship Tournament.

“I think we’re going to be really good this year,” he said. “I have no doubt about it. We have a really good core group of guys that can compete at the highest level.”

GVSU, a member of the Great Midwest Men’s Volleyball Conference, is no stranger to playing some of the best teams in the nation. The Lakers have earned a pair of top 50 finishes in the national tournament the past few seasons, which features teams from Division I and Division II schools.

“Competing against the best makes you better,” Marciniak said. “We’re much more focused in those situations. We expect to be near the top this year.”

The Lakers will have some time to improve before the national tournament, starting this weekend in a GMMVC tournament at Adrian College. GVSU will then head to the University of Kentucky (March 2-3) to compete in the conference championship.

“We should contend for our league championship,” Allen said. “We have a lot of size, athletic ability and potential. It’s just a matter of developing that potential.”