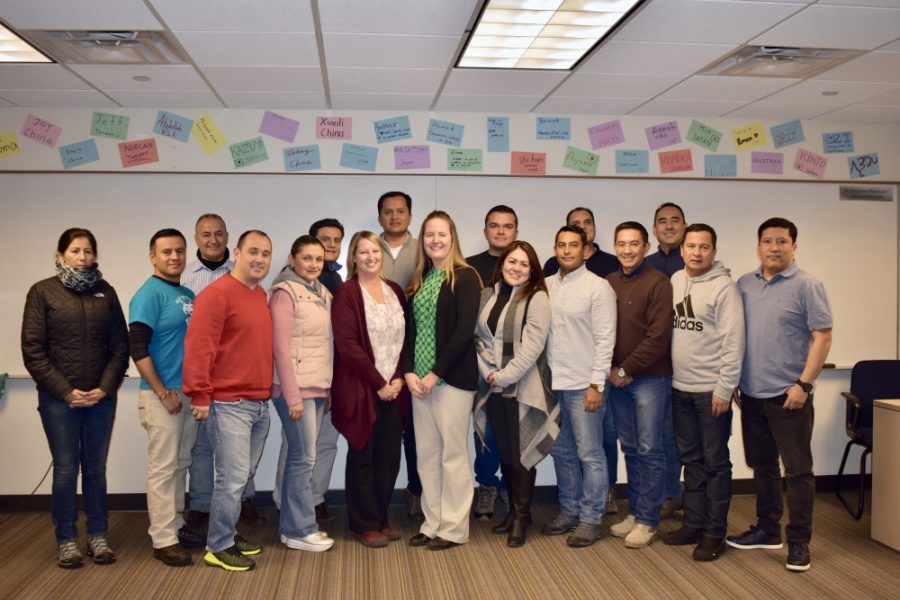 Many people across the globe dream of learning English, but don’t always get the chance. This semester, a handful of police officers from Colombia got the opportunity to do so, through a program provided by Grand Valley State University.

GVSU’s English Language Studies program is hosting 15 high-ranking members of the Colombian National Police (CNP) until Dec. 7, teaching them English language skills to improve their police work in Colombia. Guests within the CNP include one colonel, three lieutenant colonels, ten majors and one captain. The officers will be studying a total of four weeks and have been living in the on-campus apartments during their studies.

This collaboration between GVSU and CNP is the first of its kind at the university and the course work is tailored to fulfill the CNP’s academic goals. The program incorporates general English language classes as well as classes devoted to English terminology for law enforcement.

“Learning criminal justice vocabulary along with the regular English classes will help them in their interactions with English-speaking tourists and be more comfortable conversing in English in their field,” Wooning said.

The program also included interactive visits to local law enforcement and government sites around Grand Rapids, including the Ottawa County Jail, the Grand Valley Police Department and the Grand Rapids Fire Department. One of the CNP’s studying members, Jaider Benavides, a 40-year-old major in the CNP, explained that the immersive program was important to the CNP’s decision to partner with GVSU in their English studies.

“We all see learning English grammar, listening, speaking (and) police vocabulary as important because it allows us to practice the English language within our profession,” Benavides said. “I think we have been very fortunate because we have felt at home, the teachers and students have welcomed us very well on campus and it feels great to live the academic environment at this prestigious university.”

Benavides said that the CNP wants to strengthen its bilingualism program by immersion through visiting the countries that speak the languages. The CNP does peace missions with the United Nations in various parts of the world and are supporting training processes through English study in other countries to strengthen their capabilities.

There are a total of 30 CNP officers in the United States studying English, with 15 officers at GVSU and 15 who are currently studying in DeKalb, Ill.. Benavides says the intense, level-based curriculum has been helpful in the officers’ learning and the rigorous study has helped the officers to learn as much as they can during their short four-week visit.

“An increasingly globalized world where crime does not stop and is parallel to these advances requires international cooperation between police and the importance of learning a second language like English provides many opportunities,” Benavides said.

GVSU’s ELS program is an inclusive one, providing English-learning programs for nearly every profession. The goal of ELS programs is connecting people from different parts of the world through the English language and helping individuals grow their passions through their knowledge of the language.

Wooning said she has seen the impact that each new group has on the university’s students and the effect that visiting GVSU has on the members of the CNP group. She knows the officers’ visit has had an especially significant influence on GVSU.

“It’s been a great opportunity for our Colombian students to learn about English and American culture and, for them especially, the United States criminal justice system,” Wooning said. “International interaction between students is important in helping us learn about new cultures, where people come from in the world, and different world views.”