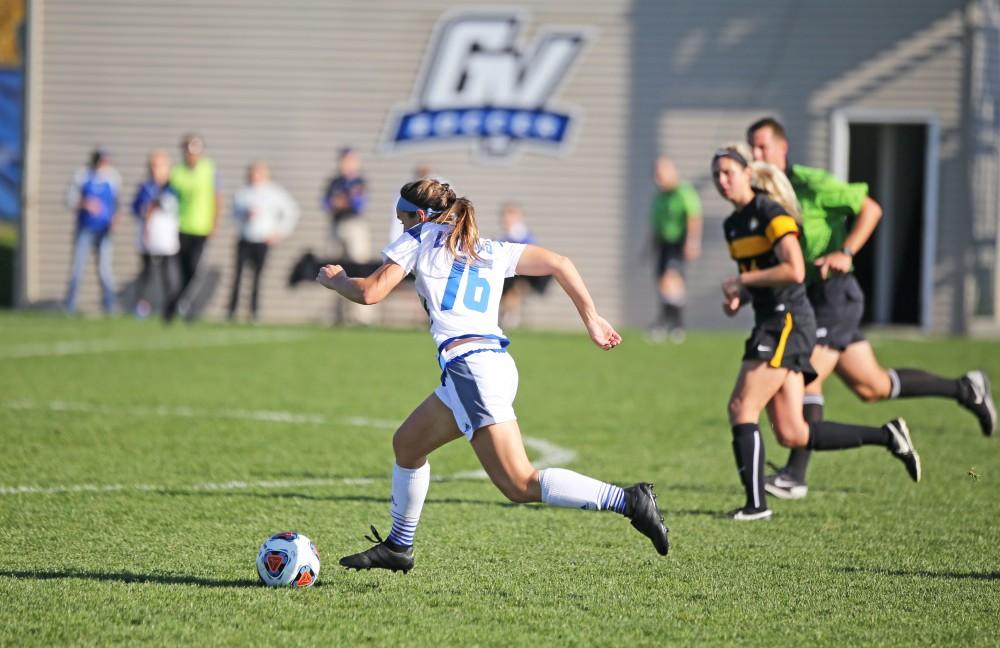 Labeled a “warrior” by GVSU Head Coach Jeff Hosler, the senior is ready to take back her place at the core of the Laker lineup.

Johnson, a native of Toledo, Ohio, is returning for her senior season with GVSU. After making just 10 total starts during her freshman and sophomore seasons, Johnson broke out to become a key figure in the Laker 11, starting 24 of her 25 appearances. After failing to capture what would have been GVSU’s fourth consecutive national championship in 2016, Johnson is eager to get back on the playing field.

“We do enjoy our time off, but I’m chomping at the bit (to return),” Johnson said. “After having the result that we did last year, we have so much to work on and so much to conquer, especially with a ton of new people. It’s going to be fun.”

The Lakers will have 15 new players for the 2017 season, including 13 incoming freshman. Despite the burden that comes with unfamiliarity, Johnson is looking forward to developing chemistry with her new set of teammates.

“I’m excited for the learning curves that I think are going to be thrown at us,” she said. “I think we have a solid group. We’re going to have some fun chasing the success we’re after.”

Johnson, who wears No. 16 for GVSU, plays in the holding or defensive midfielder position for GVSU. The position, referred to occasionally as the “number six role,” has the responsibility of protecting the defensive backline, as well as being the link from defense to offense. It’s a role that Johnson relishes.

“Every now and then I’ll get the jitters to be in front of goal, but the holding midfield position really demands a lot,” Johnson said. “To distribute and to be that last person to get by before you hit the backline, I always want to be the brick wall that they have to get through before they have to go against my center backs.

“It is fun scoring goals, but I really like the defensive aspect to it. I may not have finished the play, but I may have been a huge contributor in starting it.”

Johnson is incomparable, according to her head coach. He says her impact on the team is difficult to measure.

“It’s hard to make a comparison to her with other midfielders,” Holser said. “Physically, it’s not going to match up.”

Johnson was recognized as an All-GLIAC First Team Selection during her junior season. She was also named a Conference Commissioners Association (D2CCA) All-Midwest Region Second Team Selection. While Johnson has enjoyed individual accolades, she credits her teammates for her and the team’s success as well.

“I love them,” Johnson said of her teammates in defense. “I worked really well with Shannon Quinn and Erika Bradfield last year. I’m really excited to get back with Shannon. She’s the voice in my head, and she always keeps me in check.” Quinn, like Johnson, is returning for her senior season.

Despite having a disappointing end to last season, Johnson is focused on improving daily.

“I’m not the player to look far ahead, and I don’t believe our team is either; we’re one day at a time,” Johnson said. “We’ve got to conquer our fitness when we get on campus, and we can’t even complete a game if we don’t have 11 confident people we can field. It’s going to be a day-by-day thing, like it should be and like it always is.”

While her junior year ended with a defeat, Johnson is not spending any time dwelling on what’s behind her.

Going into her senior year, Johnson will look to carry the momentum from last season. However, she thinks there’s always something to prove.

“I feel like I had one of my strongest seasons as a junior, but I’m only as good as my last time out,” she said. “I have a lot to prove still. It’s always a bit nerve-racking, but it’ll be fun.”