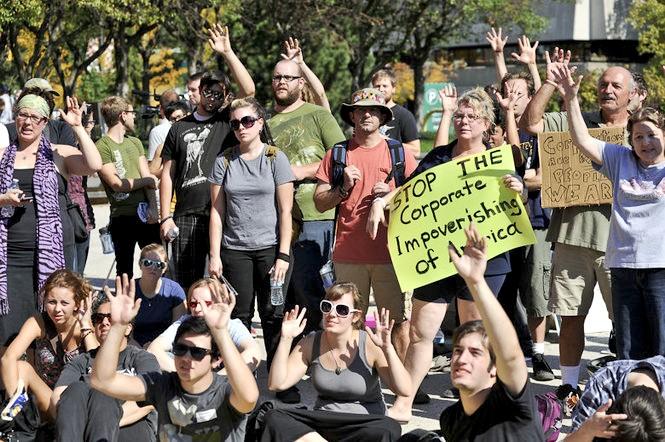 The movement that started on Wall Street in New York City has reached West Michigan, with supporters assembling in numbers at Calder Plaza in downtown Grand Rapids Saturday in what was the second of general assemblies.

The demonstrators met first at the Fulton Street Farmer’s Market and then marched to Calder Plaza, where they held an open forum to discuss logistics, voice concerns and raise further support for the upcoming occupation.

The nationwide Occupy movement has been criticized for its ambiguity and lack of focus, with no clear leader or clear unpacking of key issues, but the core of the movement seems to rest with the censure of Wall Street and the condemnation of corporate greed, which has created disparity between the social classes.

“I’ve been following it in New York, I followed it when it moved to Boston and right when I saw the Grand Rapids (Facebook) page pop up, I liked it, then I started to get involved in the dialogue and wanted to bring my skill set to the table and help get this thing off the ground,” said Mike Kolehouse, 25, a local political organizer and 2010 political science graduate of Grand Valley State University.

Kolehouse said the main points of this occupation is to address the ideas that the burdens of the state cannot be shifted on to the backs of the middle class, the poor and the elderly. He said that this year alone there has been an 86-percent tax cut for corporations, a $236 million tax on senior pensions and a 48-month lifetime limit on cash assistance, which he said directly affects the working poor.

“Everyone’s taxes have been raised so that we (government) can lower taxes for big businesses and corporations,” Kolehouse said. “That’s not fair; you shouldn’t take from the poor to give to rich.”

Kathryn “Kat” Sluka, who said she was the first female arrested at the Occupy Wall Street demonstration, was present at Calder Plaza helping to organize the general assembly.

“I was arrested twice and after my second arrest, it was very, very difficult for me,” she said. “I was sexually assaulted, manhandled, I was held for 30 hours so it was time for me to go home.”

Despite being arrested, Sluka, 24, said she learned a lot while in New York.

“I honestly thought it was going to last a day or two, and a friend invited me, and I thought, why not, you ask me to go somewhere, I typically go,” she said. “When I got there I had this overwhelming sense that this was something bigger than I had ever experienced. It just grabbed ahold of me, the people were incredible and I stayed.”

Sluka hails from Muskegon, Mich., which has suffered unemployment and economic strain as well, and was representing everyone else from Muskegon who could not attend.

Beyond these things, Sluka said she also learned about what the NYPD is capable of, including certain “war tactics” as well as the support she experienced from complete strangers.

However, Sluka is still facing charges, including three counts of civil disobedience, one refusing to obey a lawful order and one resisting arrest, all which are civil infractions. The American Civil Liberties Union was contacted on her behalf and she has lawyer from the National Lawyers Guild.

“I am here today because I am one of the many people who share a large discontent and dissatisfaction with the political and economic system,” he said.

Valle said he hopes to get GVSU students to take notice of what is affecting them, but that because it still in the early stages of organization, it is hard to draw a concrete plan.

“These things take time to actually develop,” he said. “This general assembly is aimed to have a sharp discussion around what our nearest plans should be.”

The group is also planning to bring a list a demands to city officials as well as apply for a permit to occupy a location for an extended period of time, which they can only do at today’s city council meeting. The meetings are held on the second and fourth Mondays of each month. If they are denied a permit they are prepared to contact the ACLU for help.

Other plans included figuring out bathrooms, sleeping arrangements and food.

As of 3 p.m. Saturday, a tentative date for the beginning of the occupation was set for Oct. 22, the same day Detroit is set to begin its own demonstration, though a location had not been agreed upon. Some were set on beginning the occupation that day at Calder Plaza. For more information on Occupy Grand Rapids, visit the groups’ Facebook page at Facebook.com/OccupyGrandRapids.