Take Back the Night raises awareness for sexual assault 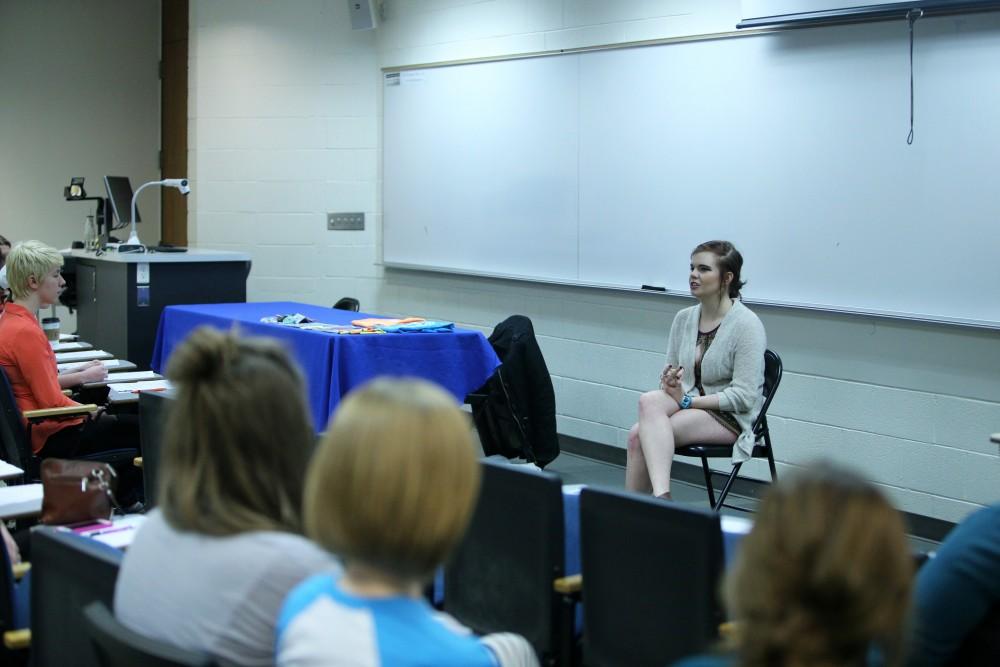 GVL / Emily Frye The Grand Valley State University group Eyes Wide Open, hosted the annual "Take Back The Night" event which addressed sexual assult and those affected by it on Monday April 11, 2016. Student member Malayna Hasmanis speaks to the group.

Grand Valley State University students and faculty, along with community members, gathered on April 11 for Take Back the Night, an annual event aimed at raising awareness of sexual assault victims.

Hosted by the student organization Eyes Wide Open, “Take Back the Night” featured discussions led by two sexual assault survivors and a silent march across campus.

Malayna Hasmanis, a junior at GVSU, kicked off the event by opening up about her own experience being in an abusive relationship. She focused her talk on the widely-believed misconception that sexual assault doesn’t happen to people in relationships.

“I dated a guy for two years, and I was sexually, emotionally and physically abused by this person for a year and a half,” Hasmanis said. “The biggest issue of this is realizing that just because you’re dating somebody is not an excuse for it to happen. It’s valid, and it’s really an issue.”

Aly Phillips, vice president of Eyes Wide Open, said the march gave her the opportunity to speak up for a friend who had been sexually assaulted.

“This is kind of the only time where I can publicly think about her and take that moment and do the thing she feels like she can’t, because she’s not allowed to outwardly say she’s a survivor,” Phillips said. “She feels like it’s something she has to hide, so I do this for her. It’s really important to me.”

Alissa Ackerman, professor of criminal justice at the University of Washington Tacoma, served as the event’s keynote speaker.

In her presentation, Ackerman shared her testimony of being sexually assaulted when she was 16. After 15 years of staying silent, Ackerman made the decision to open up about the assault in April of 2014.

Since opening up, Ackerman has drastically changed her lifestyle. Originally a sex crimes researcher for more than a decade, Ackerman now travels across the country sharing her story and promoting awareness about the effects of sexual assault.

“Doing this work has been so rewarding, more so than any of the research I’ve done for 10 years,” Ackerman said. “I’ve never gotten to see healing before my eyes doing research, but being open and speaking with other survivors, I’ve seen so much growth in myself personally and professionally and also with all of the people I’ve spoken with.”

Under Megan’s Law, law enforcement authorities are required to make information concerning registered sex offenders available to the public. Because 90 percent of victims know their perpetrators, Ackerman said policies like this are doing nothing to protect people from sexual assaults.

“If you look at your address on the registry and there are dots everywhere, most of us don’t know how to delineate risks. We just see (a) sex offender,” Ackerman said. “So if we got rid of all the people who don’t have to be there and focus on dangerous people who maxed out their sentences and are living in the community, that would be helpful.”

To close out the night, attendees were invited to take part in a march across campus signifying the resilience of sexual assault survivors. Participants were given whistles and signs to carry as they marched.