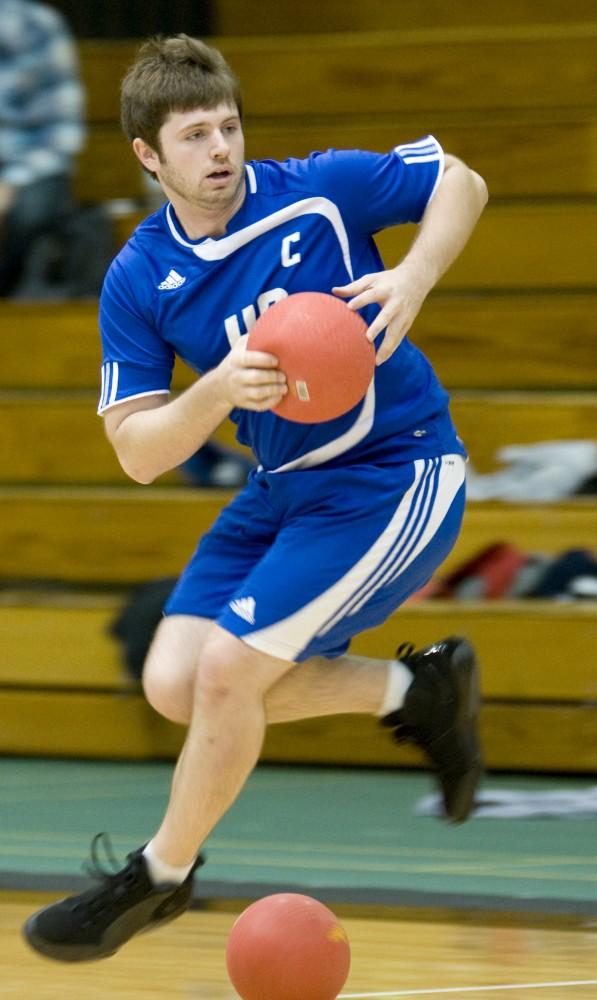 Senior capitan Jimmy Strokes evades an opponents throw during a past matchup.

Despite four consecutive national championship crowns, no one expected the Grand Valley State University dodgeball team to return for them title game at the onset of the 2010-2011 season.

Instead, the team defied the odds and made a run for an unprecedented fifth-straight title, falling just short with under a minute to go in a gut-wrenching 2-1 defeat to Central Michigan University in the title game on Sunday afternoon.

Playing with only three experienced seniors and taking 12 newcomers to the tournament, many had written the Lakers off. Senior co-captain Greg Trippiedi was impressed with the play of his young squad.

“We would not have been in the championship game without the younger guys stepping up,” Trippiedi said. “They were a major part of the reason that we made it as far as we did in a year where a lot of teams thought that we would be rebuilding. Instead, we were tied with the national champion with 30 seconds to go.”

Junior Brian Savalle agreed that the young, inexperienced team did a great job in getting the team to their fifth-straight title birth.

“We had to throw a lot of our younger guys out there and had three first time players on the varsity squad,” Savalle said. “They stepped up huge in this tournament for us and played really well for first year players.”

Central Michigan dominated their competition all year and was the No. 1 overall seed going into the tournament, but GVSU put up a major fight. The Lakers opened up a 1-0 lead, but the Chippewas tied it up at 1-1 shortly before half time. Disaster struck late in the second half, with Central Michigan getting a crucial second point with around 33 seconds.

“It was two evenly matched teams but someone needed to win and someone needed to lose,” Trippiedi said. “It’s a game that comes down to the clock a lot and at the end of the first half we did not close them out. In the second half we were trying to play for overtime, and we held out for all but 30 seconds.”

There was no shame for the Lakers to lose to Central after the season that the Chippewas had.

“We played really well, but Central is a phenomenal team and they came out one point better than us today,” Savalle said.

The Lakers will hope to recapture the title next year, and will be poised to make another deep run with the amount of talent and experienced players expected to return.