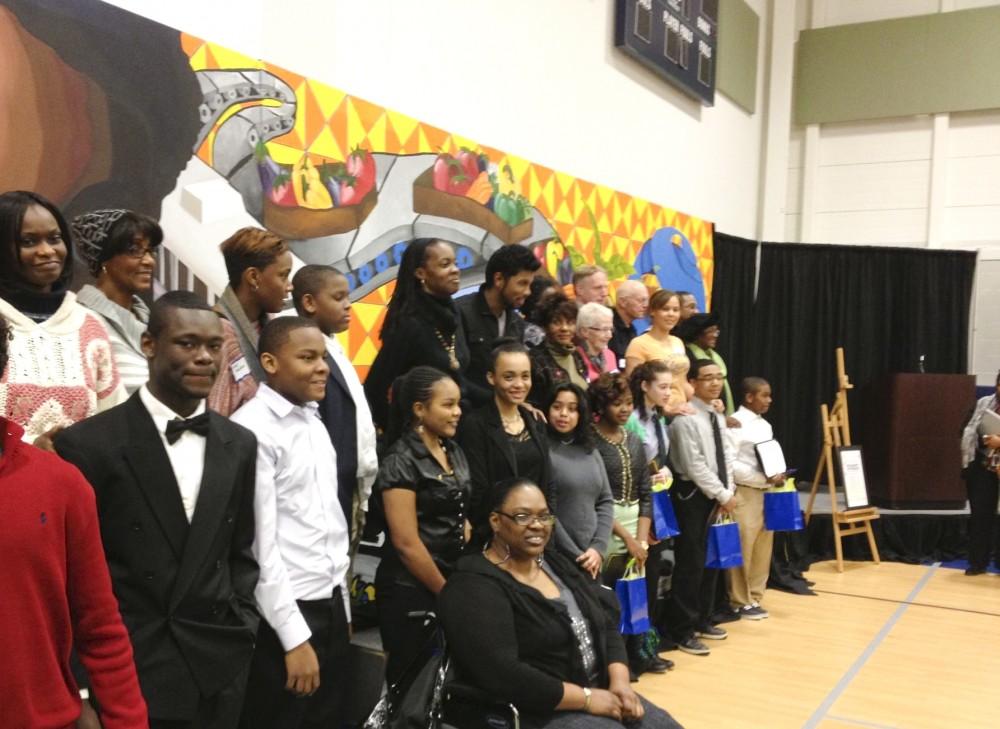 For six hours a week for almost a full year, 11 students from the Henry Ford Academy in Detroit toiled over their canvas panels, drawing and painting and learning from a local art hero. During the summer, they traded in Wii remotes for a paintbrush, and during the school year, they sacrificed class time to meet their project deadline.

The product of their labor—a bus-sized mural—was unveiled Feb. 22 at a reception in Detroit and will be entered in the Grand Rapids Art Prize competition before making its permanent home in the lobby of Grand Valley State University’s new building for the Seidman College of Business.

“What we had wanted to do—what I’m always doing—is trying to find art for new buildings and we have the new Seidman building coming up,” said GVSU Art Galley Director Henry Matthews, adding that he wanted the art to relate to international business. “We would love to have had a mural by Hubert Massey, who is one of our distinguished alums, (but) the mural by him didn’t work out. It was just something we couldn’t afford to do.”

Instead, GVSU contracted Massey, a Detroit artist, to work with Henry Ford Academy students to design a mural.

Massey spent the year supervising the middle school and high school students, noting that he did so because he wanted to inspire young artists and pass on the knowledge he gained from his experience in the art world.

“When I was coming up, I had some really good mentors,” he said. “I wanted to pass that on.”

And he passed on more than artistic skill.

“I think the process of doing the art from the beginning to the end shows discipline and the ability to work on certain images for a long period of time,” Massey said, adding that the students also gained problem solving and teamwork skills.

Before the artistic process began, they underwent an interview with Massey, their art teachers and people from the local College for Creative Studies to showcase their abilities and portfolio.

Manal Kadry, the students’ art teacher, said the selection process was so difficult that the committee chose 11 students rather than the 10 they had set out to find.

“We have a big population of creative students,” Kadry said, adding that more than 60 between sixth and twelfth grade interviewed for the project.
Ellen Sprouls, who works with both the GVSU Art Gallery and Charter Schools Office, said the final product is the students’ vision of the future in terms of Detroit and commerce.

Sprouls said this isn’t the first project GVSU sponsored for its charter schools. Previously, it paid for students at Black River Public School in Holland to produce metal sculptures with the help of three local artists.

“We bring funding to the table to make projects possible that the schools don’t have the resources to do on their own, so we give the students an experience they couldn’t possibly otherwise have,” she said.

Since 2011, Sprouls has been working to help GVSU’s charter schools sponsor Art Prize entries. The Henry Ford Academy’s mural is only one of seven entries from GVSU’s schools this year.
[email protected]