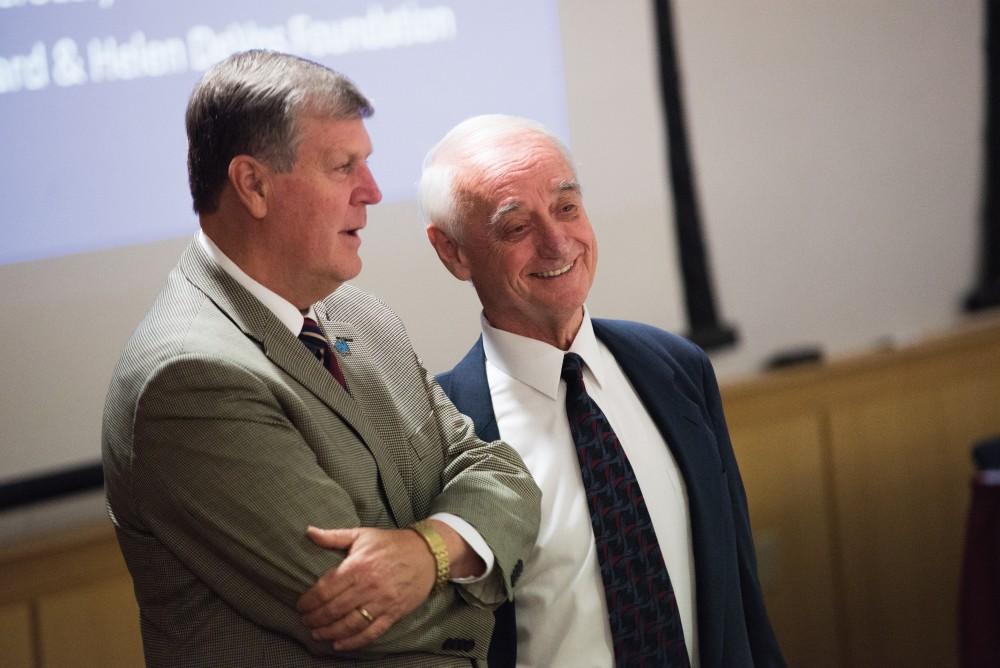 The John Templeton Foundation awarded the Kaufman Interfaith Institute at Grand Valley State University a grant of $938,975 to conduct a project based on how religion is impacted by science.

The money will largely be spent on organizing workshops and paying participants for their work in the project. Kelly Clark, senior research fellow at the Kaufman Interfaith Institute, said the project consists of professors, philosophers, physicists and biologists, all of whom identify with Judaism, Christianity or Islam.

He said participants come from a variety of different countries and will work together and discuss matters related to interfaith cooperation and how to encourage “scientific inquiry among Abrahamic believers.” The project will take place over two years and in many different countries, eventually concluding in a conference in Istanbul.

After the project is completed, Clark said the institute is counting on two books to be published, a video and numerous scholarly articles to be created about the project.

The grant is the largest the institute has received in its six years of existence. Clark said the institute typically receives one to two grants a year in the $50,000 range, and this grant is a “quantum leap forward” from what they typically expect.

The director of the Kaufman Interfaith Institute, Douglas Kindschi, said the institute is already in talks with GVSU president Thomas Haas about future grants, but wasn’t willing to specify from which organizations. Although the grant is large, Kindschi said it is only one step forward in the right direction.

“I don’t think the mission of the institute will be realized until we finally have peace between religions,” Kindschi said. “It could be very well be the most important issue the world will face in the 21st century, whether the religions can live together in peace.”

Clark said sometimes the nature of religion and science puts them at odds with each other and there are “battles on both sides.” Clark has written a book about the topic called “Religion and the Sciences of Origins” published in 2014. He said a lot of the Abrahamic traditions are in agreement that modern science is opposed to their religious views, something that will be addressed in the project.

“What we’re going to do is see if there is some middle ground, if people could be both sides of science-affirming and faith-affirming,” Clark said.

“It keeps getting bigger and bigger all the time,” he said. “We’re just really excited that it’s going to go international.”

Kindschi said while the project won’t solve the problems between different religions, it aims to help by setting a precedent for other institutions to follow. He said the Kaufman Interfaith Institute is part of a movement.