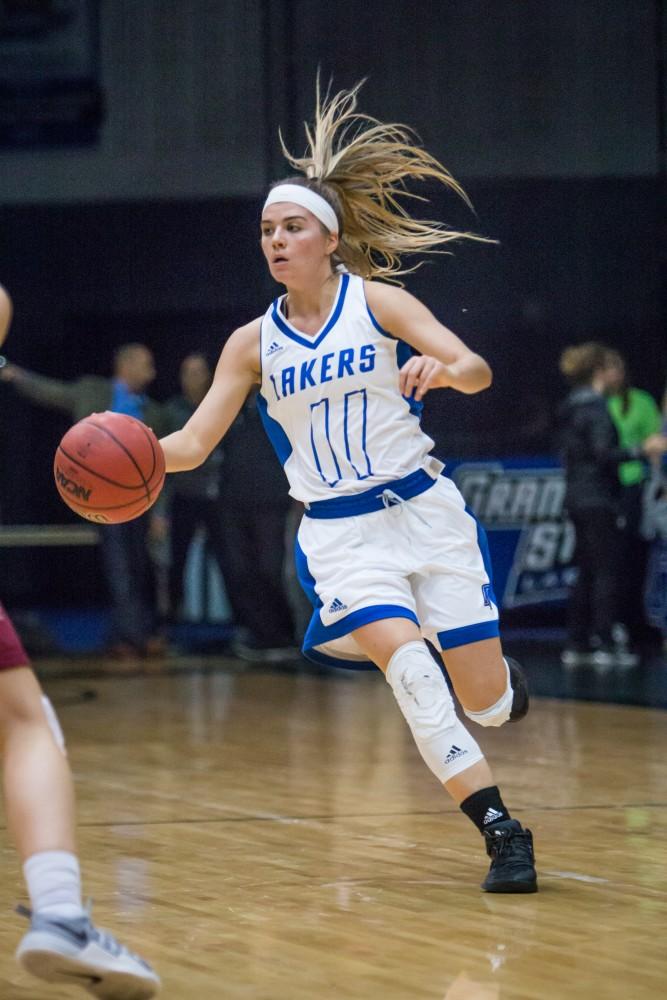 With a perfect 4-0 record to start the new season, the Grand Valley State women’s basketball team has made the beginning of this season look fairly easy.

The Lakers were hoping to continue the winning streak going into a match against Southern Indiana on Saturday, Nov. 25 in Louisville, Ky. in the Bellarmine Thanksgiving Classic.

GVSU put forth a great effort in the game against the Screaming Eagles, but unfortunately in the end it was a losing one. The Lakers suffered their first lost of the season with a final score of 53-44.

The Lakers had a slow start to the contest, falling behind the Screaming Eagles by an 8-11 score after the first quarter, but the Lakers came back offensively during the second quarter, taking a seemingly commanding 27-19 lead before heading into halftime. GVSU outscored Southern Indiana 19-8 in the second quarter.

However, the true battle occurred in the middle of the third quarter, as the Lakers were up 34-23 just eight minutes in. Minutes later, the Screaming Eagles managed to catch up 7-1 closing the gap by 3 points 35-32.

For the Lakers, the fourth quarter was nothing close to what they expected. GVSU continued to lose momentum during the final quarter, allowing the Screaming Eagles to dominate the quarter 21-9 to give Southern Indiana a comeback 53-44 victory, handing the Lakers their first loss of the season.

Overall the Lakers played a tough game, and their will to win showed strengths that created a competitive game, too. GVSU head coach Mike Williams was proud of how his lady Lakers competed, but ultimately he would have liked to see them stay in longer.

“I thought we competed pretty well for three quarters,” Williams said. “They made a run on us, and I thought we kind of gave in a little bit, just on both ends of the floor.”

Junior Natalie Koenig scored a team-high of 16 points, as the guard hit 5-13 shots from the field, including going 2-5 from the three-point line, while sophomore guard Jenn DeBoer hit two triples in the game. DeBoer tallied 8 points, while also tying Koenig with a team-lead of three assists.

Freshman Maddie Dailey also chipped in 7 points for GVSU, while also pulling down five rebounds. Senior center Korynn Hincka collected a team-high of seven rebounds, while junior Taylor Parmley and sophomore Cassidy Boensch each grabbed six of their own.

The Lakers will have a quick turnaround as they plan to be back on the courts tomorrow, but before then, coach Williams hopes GVSU can tackle a few issues from Saturday’s game.

“We’ve got to stay in plays, we got to be more relentless on the glass, on the defensive end and just stay confident,” he said. “The shots that we’re getting, I know we can make them, we just need to make them.”

Transitioning into being a young team like the Lakers have includes many of the players having first-time experiences or growing pains, as all players do at one point.

“We got to get by and move on,” Williams said. “Its a young team, and a lot of new faces. (It’s the) first time a lot these players have been in this situation, so we need to learn from it and move on.”

Despite Saturday’s setback, it was only the first loss of the season, and the Lakers are all about looking forward.

The Lakers will be back competing in Michigan Tuesday, Nov. 28, but this time they will be heading to Wayne State University in Detroit to face their GLIAC rival.