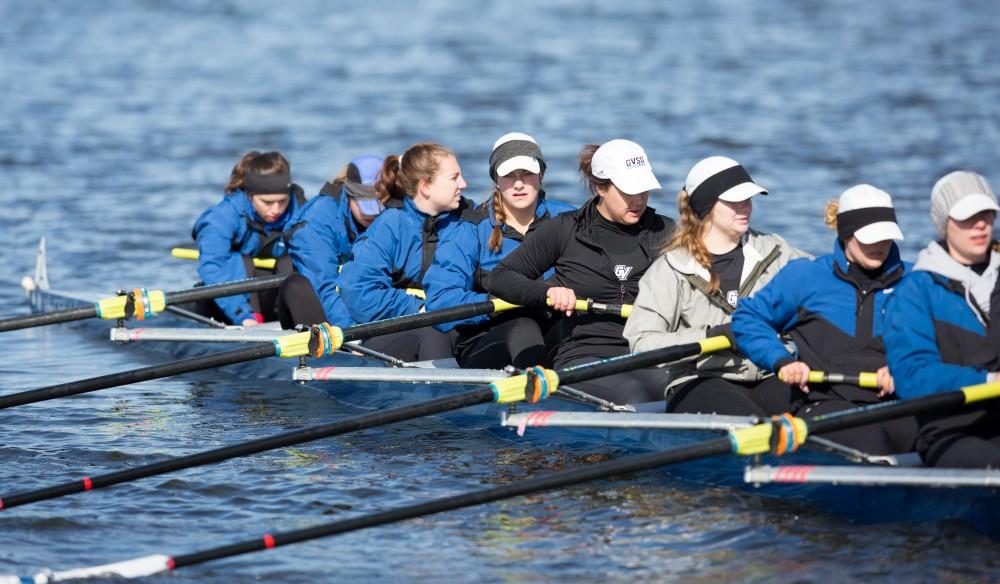 The Grand Valley State University rowing club traveled to London, Ontario this past weekend to gear up for its 2016 fall campaign. The men’s and women’s varsity crew trained with the University of Western Ontario, one of the better rowing crews in Canada.

The crews trained at one of the Canadian national rowing centers in London on Fanshawe Lake. The early training sessions were suited toward technique and understanding the basics. Soon after, the team started to row race distances as they eased into the water.

GVSU scrimmaged the UWO crew, which is in mid-season form due to different schedules in Canada.

“We figured if we could go there and be within shouting distance, then we could see where we stand,” said GVSU coach John Bancheri.

The men’s boat was just four seconds behind the opposing Canadians’ boat.

“I knew we would have a nice group to work with this year,” Bancheri said. “With some blue-chip freshmen that have come in, along with an incoming transfer, we look like we can put together a great year.”

The expectations are high, as the waiting game has paid off for the Lakers. With all the pieces in place and the right system to make the program go, it’s time for the crew to take the next step and find success in the water.

The women’s team is trying to rebuild after having success at the ACRA National Regattas last year. However, with assistant coach of the year Michelle Goodwin coaching them up, the Lakers expect to be back in no time.

The preseason trip was more than just training for the crew. The student-athletes were able to bond as a unit as they traveled above the northern border. This isn’t the first time the team has traveled out of the country. During the summer, the crew traveled to England to compete.

“This weekend was a chance to get away from the normal grind and get some fresh air,” said senior men’s varsity captain Chris Doherty. “There’s nothing like spending a weekend road trip with your best friends.”

The crew was able to see sites such as Niagara Falls when they weren’t in the boats training. The experience was more than just a training session. It was cultural learning environment.

Now back from foreign soil, the Lakers hope the fall season will start and finish strong. The first race is Sunday, Oct. 9 at the Head of the Grand Regatta race in East Lansing.

“Everyone here has a drive to succeed,” said women’s varsity captain Faith Platz. “I can see that we will all put in the necessary work to achieve our goals.”

The travel miles for the rowing club will not decrease any time soon. This upcoming fall season, the Lakers will represent GVSU in Massachusetts, Kansas and Florida.