Rules of the road 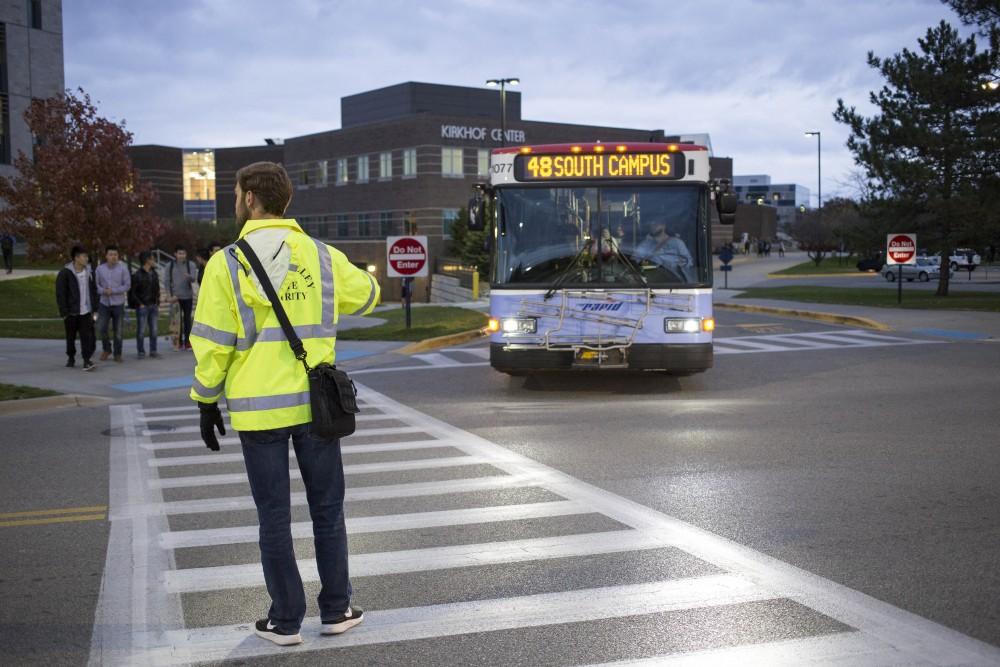 Since the beginning of the fall semester, there have been three instances of collisions between cars and pedestrians on the Grand Valley State University campus. Following each of these instances, the pedestrians were transported to the hospital with non-fatal injuries.

GVSU prides itself on being a pedestrian-friendly campus, however, the biggest problem campus security sees is the failure to stop and look both ways before crossing the street said GVPD Capt. Brandon DeHaan. This causes issues on both sides, DeHaan said.

“We are noticing that in most cases of collision, people are not stopping, not paying attention and walking out in front of motor vehicles without giving them enough time to stop,” DeHaan said.

Though the university has bike paths installed throughout the Allendale Campus, cyclists need to remember that they have to follow the rules of the road as well DeHaan said.

At the location of each accident, there were no crossing guards stationed, as they were not in areas associated with heavy traffic.

The student employees, whose traffic-green vests have earned the nickname, “grellow,” are placed in areas where the university has noted heavy traffic during peak hours. These high-traffic times are usually in the morning and evening after classes finish up.

Before student workers are allowed to direct traffic on their own, they must complete several trainings, including a mentoring program that teaches students how to work with the flow of university traffic.

“We work with student employees until they are comfortable,” Caton said. “Though we do have an official training program, we wait until students feel comfortable working with the road.”

In 2014, 4,884 pedestrians and 726 bicyclists were killed in crashes with motor vehicles in the U.S. Though GVSU has not had a long-lasting problem with fatal collisions on campus, the police department is encouraging campus community members to take extra caution on the road and be aware of surroundings no matter the official rules of the road due to the rise in reports this year.

A $600,000 Grand Rapids bicycle safety education campaign launched in May in an attempt to cut down on bicycle crashes in the city. Since the launch of the campaign, total crashes involving bicyclists decreased from 72 in 2015 to 42 in 2016 according to the city of Grand Rapids.

Those looking for more information on traffic safety initiatives and rules of the road can visit the police department’s website for tips and resources.

“This is a problem that can be avoided by taking a little more time,” DeHaan said. “We have to work with each other to keep our campus safe for everyone whether they’re in a car or on foot. Be alert, aware and responsible for the safety of your community.”

Look both ways before you cross in the crosswalk, and keep looking as you crossDo not assume that because you can see the driver, the driver can see you or will automatically stop for you.Wear bright reflective clothing at night, in the evening, in the early morning hours and during inclement weather.Learn the rules of the road and obey all traffic laws.Check for traffic. Always be aware of the traffic around you.If crossing in a crosswalk, bicyclists must come to a complete stop and look both ways before proceeding through the crosswalk.Protect your head. Wear a helmet.