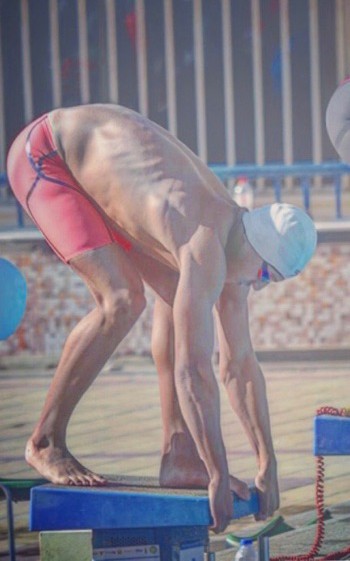 The Grand Valley State men’s swimming and diving team member Ahmed Nabih has already created a legacy for himself while only being a sophomore at GVSU.

The Lakers recently competed against Northern Michigan University this past Saturday, Nov. 4, at the GVSU Fieldhouse pool, where Nabih managed to break a GVSU pool record in the 100-meter breaststroke with a time of 55.66.

Not only did Nabih set a new GVSU record, but with this independent accomplishment he also was named GLIAC Male Swimmer Athlete of the Week, announced Friday, Oct 27.

This was one of Nabih’s greatest achievements but not the only one. Nabih was able to compete in the 2017 GLIAC Championships last season, where he finished 12th in the 200-meter backstroke with a time of 2:06.02. He also placed 14th in both the 100-meter backstroke and 400-meter individual medley with times of 57.91 and 4:07.52, respectively. Nabih ended the competition with a 15th-place finish in the 200-meter individual medley with a time of 1:55.06.

Andy Boyce, who is in his ninth year as the head swimming and diving coach for GVSU, believes Nabih has contributed to the team through many ways.

Getting used to a new lifestyle can be a bit tricky, especially coming from a different part of the world. Nabih is originally from Egypt.

The Lakers welcomed the native Egyptian with open arms and created a new home for Nabih. But how could someone from so far away end up at a small town like Allendale? Coach Boyce put it simply.

“We emailed a bit and set up a Skype,” Boyce said. “We talked through there, and he ended up coming in last December on a training trip with us and started up second semester.”

Boyce has noticed tremendous growth in Nabih’s performance during events. He was able to reflect on the changes made by Nabih since his freshman year and also share details about his journey here at GVSU.

“I think just getting used to the college life and being a student athlete has been a change I’m sure for him coming from Egypt and having 60 people in your corner supporting you on the team, 60 new friends,” Boyce said.

“It (has) been fun to see him grow and kind of learn how he practices,” Boyce said. “It took him a little while at first, but he started to figure out when to push things hard and when to back off in practices and things like that, and he’s really come a long way.”

“We’re looking pretty good in that event right now as for the rest of the nation,“ Boyce said.

Nabih and the GVSU swimming and diving team will be traveling to Indiana to face Ball State Saturday, Nov. 18.