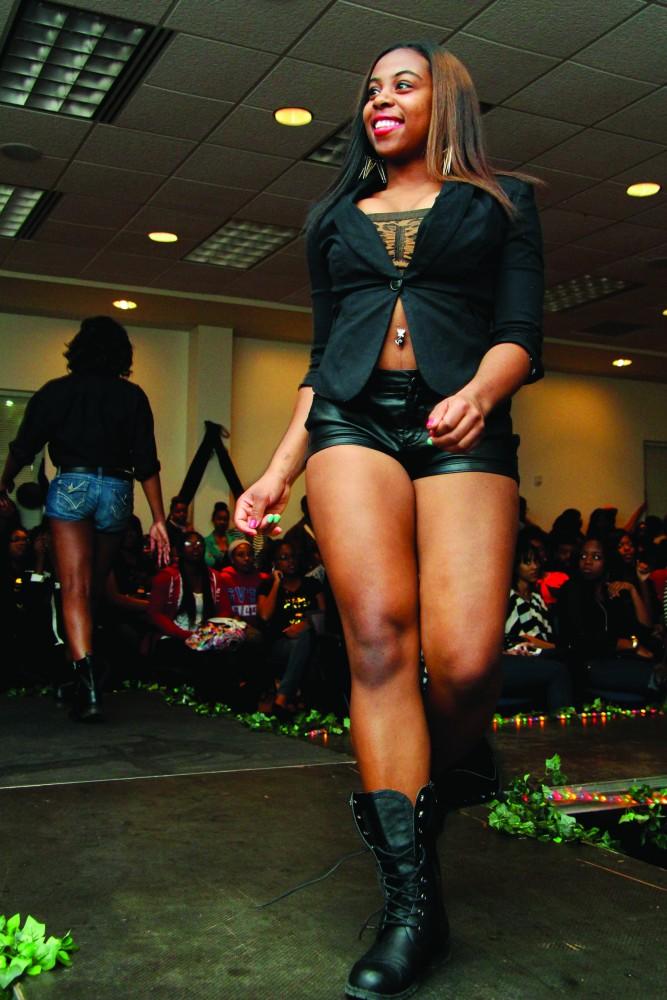 As hip-hop blared from the speakers and the heat of the room rose with a continuous flow of spectators, student hair models strutted down the runway in the packed Pere Marquette Room during the fourth annual Hair Show on Friday.

As soon as the doors opened, the seats filled quickly leaving only a little standing room and many viewers packed around the doorways, standing on their toes to catch a glimpse of the models.

“It has always been a huge turnout since the second hair show,” said Khadijah Johnson, president of YBBW. Johnson said the hair show began as just a fun idea that has since transformed into a tradition.

Mareisha Winfrey, vice president of YBBW, said the show always gets a great turnout and the crowd has continued to grow every year.

“It’s one of our biggest events that we do as an organization,” Winfrey said.

Male and female models flaunted various hairstyles as they performed choreographed dances to hip-hop songs down the runway.

Winfrey said the purpose of the show is to highlight the talents of students on campus.
“We do this for students to market styles and sales,” Winfrey said.

All stylists participated on a volunteer-basis, and there was no method of judging.

“We try not to do it competition style because we want everyone to show their talents to be best of their ability, not to try to outdo the next person,” Winfrey said.

Tya-Quea Parrot, a sophomore member of YBBW, displayed three hairstyles at the show. The Health Communications major has been styling for four years, but this was her first time participating in – and even attending – the show.

“Everybody asked me to do it because they heard I could do hair, so I was like, ‘Well, might as well,’” Parrot said. “It seemed like it would be a good opportunity.”

Parrot intends to style hair part-time after college and used the show to begin advertising her talent.

“That’s basically what I’m doing,” Parrot said. “(It is) a way to market myself.”

“Hair show was a great success,” Johnson said. “We were able to show the talents of local stylists and GV students. We also were able to host a show for students and visitors.”
[email protected]