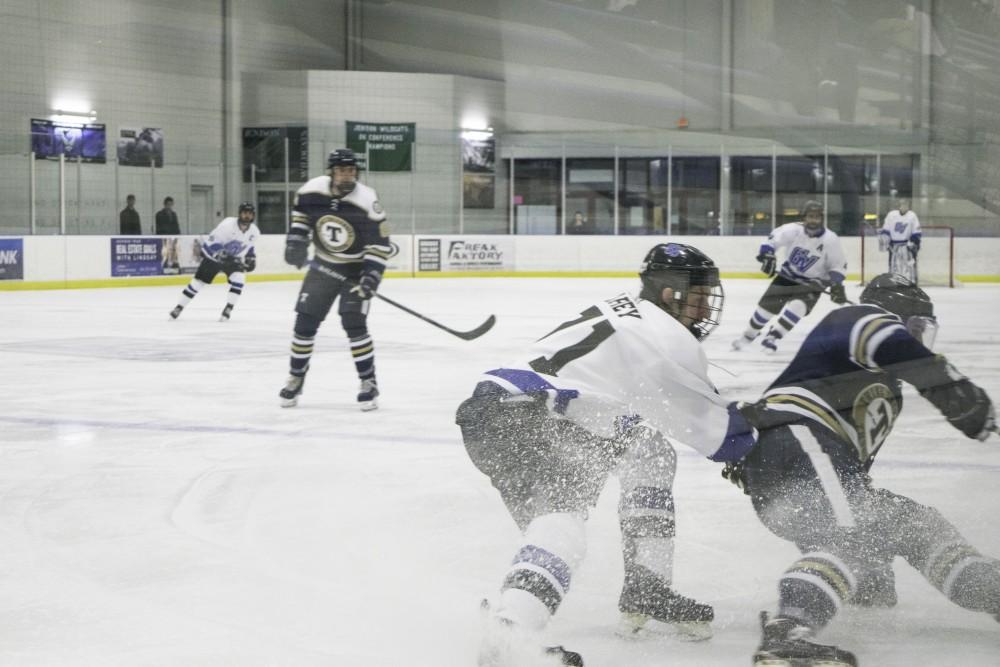 In a season where the play on the ice has looked fairly easy thus far, the Grand Valley State DII men’s club hockey team faced their toughest test of the year against the Trine Thunder on Friday, Nov. 2.

In the words of head coach Carl Trosien, GVSU did not come out sharp and ready to play against Trine.

“I think we came out a little flat, a little unprepared,” Trosien said. “They kind of controlled the first period and we got out of there 0-0 and then in the second period we made some special teams mistakes that allowed them to gain some breathing room.”

From the puck drop, the Thunder came out aggressively, using the speed of their front line to establish puck control and pelt GVSU goalie Jared Maddock with shots for extended periods of time.

GVSU did not help themselves either. The Lakers started out sloppy, earning two penalties for high sticking and slashing in the first 10 minutes of the first period, which gave Trine ample power play opportunities to attack the net with early on in the game.

Maddock was able to prevent the puck from getting past him in the first period, but GVSU would continue to make poor passes and commit penalties well into the second period.

Trine scored three goals in the span of four minutes and 43 seconds in the middle of the second period to give themselves a cushion against the previously undefeated Lakers.

Just when things began to look up for the Lakers, mental errors continued to shoot them in the foot. After Trine committed a penalty for hooking, GVSU had its second opportunity at a power play while Trine was short handed, only to make a poor backwards pass that lead to a two-on-one break away score for the Thunder, making it 3-0.

Freshman forward Trevor Zenas managed to chip in a goal just past the midway point in the third period at 8:16, but Trine added an empty netter with a minute to go to take down the Lakers, 4-1.

“It was a sloppy, unenthusiastic first 40 that set us back tonight,” Trosien said. However, GVSU’s head coach remained optimistic they could split the series the next day at Trine.

“It’s simple man, we gotta play our hockey,” Trosien said, “If we play the way we are capable of playing, we’ll be fine. We’ll need to flip the switch and get a quick start tomorrow with a little jump in our step but we’ll go from there.”

In game two at Trine, GVSU once again failed to get off to a quick start, allowing Trine to consistently attack the net and out-shoot the Lakers in the first period 15-3 en route to an early 2-0 lead.

GVSU answered two first period goals from Trine with one of their own from sophomore forward Danny DeBlouw to split the deficit in half with 14:46 remaining in the second period, but Trine wasn’t done yet.

With 14 minutes to go in the second period, the Thunder replied with their third goal of the game moving the score to 3-1. Approaching the six-minute mark, they netted another mark to cushion their lead even further, 4-1.

In a similar situation they found themselves in only a day prior, the Lakers decided Saturday, Nov. 3 was a different day, and would not allow the same mistakes that plagued them in the first game to haunt them again.

The comeback began halfway through the third on DeBlouw’s second goal of the game, assisted by Zenas at the 10:15 mark, moving the score to 4-2.

The Lakers continued to ride their wave of momentum as senior forward Tommy Carey and junior forward Ryan Hein began to impose their will on the Trine back line in the closing minutes of the game.

With 2:47 remaining in the third period, Hein hit Carey with a quick cross-ice pass that allowed Carey to cut the deficit to 4-3. 39 seconds later, they linked up again on a power play, producing the same result that tied the game up at four as regulation came to a close.

Having caught fire toward the end of regulation, GVSU once again went back to Carey and Hein for a third time, this time leading to the game-winning goal only a few minutes into overtime.

“We came out hard in the third and really took it to them from the puck drop,” Hein said after Saturday’s game. “We really started moving the puck and our feet and we dominated.”

The split in the series moves GVSU to 7-1-0 on the year as they head into their next match-up, a double header against Lindenwood at home on Nov. 9 and 10.