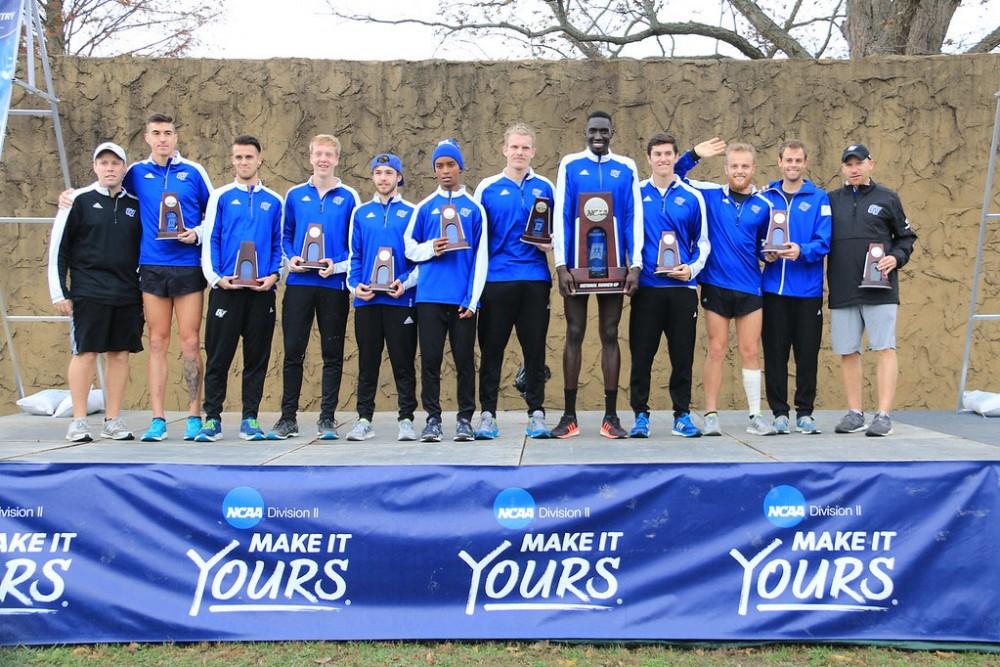 Both the women’s and men’s teams were sent off to compete against top runners in Division II, but the experience was nothing more than the Lakers could handle.

Senior Wuoi Mach, who had arguably the strongest season for the Lakers, took 11th place overall with a time of 31:19.6, and senior Brady Selner came in 26th place at 31:43.4. Freshman Abe Visser finished out the five runners for GVSU, placing 34th with a time of 31:49.3.

Although the runners didn’t redeem themselves with a trophy for last season’s close finish, GVSU head coach Jerry Baltes couldn’t be upset with his team’s performance.

“I thought that the guys did a great job at the regionals,” he said. “Staying in control, being patient, not pressing it throughout the race. They were able to come out feeling a little fresher ready to go for yesterday.”

Baltes was impressed with how his men’s team performed during the meet, recognizing the strong fight the Lakers had in them.

“It was back and forth for awhile there, real close throughout the whole race,” Baltes said. “I thought our guys competed at a very high level and gave it a great effort.”

The women, meanwhile, had a team score of 185, placing them as the sixth team overall.

Senior Kelly Haubert was the first to cross the finish line with a sixth-place finish at 21:05.1. Senior Allie Ludge took the 35th place overall with a time of 21:40.0, followed by junior Gina Patterson, who crossed the finish line in 39th with a finish time of 21:42.9.

Freshman Megan Caltagirone finished 48th with a time of 21:52.0. Rachel Bendewald was the final scoring runner for the Lakers, finishing the race 82nd overall with a time of 22:19.0.

After the women won the National Championship last season, their performance on Saturday left a bitter taste for the ride back home for senior Kelly Haubert.

“It’s hard to leave not knowing that you didn’t have the best finish that you could,” Haubert said. “But I know that each step of the way, everyone was trying their hardest for the goal of the team. The heart was there; it’s just that maybe the day just wasn’t our day.”

Coming into the race as defending national champs, the Lakers didn’t let that affect them one bit. However, having a younger team came with some difficulties the GVSU women were not necessarily prepared for.

“Since we’re a young team, I think there were a lot of people that didn’t know what to expect and how to handle the situation,” Haubert said. “Maybe it was just a little bit nerves. I truly believe we were adequately prepared from (Coach) Jerry’s standpoint.”

Even though this is Haubert’s final year with the cross-country team, she is more than positive that every runner will be able to take something away from Saturday’s match that will help them for next season.

“They can learn from the race, like maybe a mistake that they made or just embracing the atmosphere of the championship,” Haubert said. “Sometimes, I think it takes an experience like this to realize and rebuild your propose on why you run and the purpose of running for the team.”

Moving forward, the Lakers have switched gears and are now focused on indoor track and field. The team’s goal will continue to be winning championships as they transition from cross-country.

“We got two track seasons in between now and next season that all but Brady Selder will be training for and competing in,” Baltes said. “They got an opportunity in two weeks. Some of them will tow the line and try and get a qualifier out of the way for the NCAA Indoor Championship. We get an opportunity to see how we bounce back on the ladies’ side and keep moving forward on the guys’ side.”

As one season comes to a close, another begins as the GVSU track-and-field teams will be back in action for the Holiday Opener on Friday, Dec. 1, in the Kelly Family Sports Center.