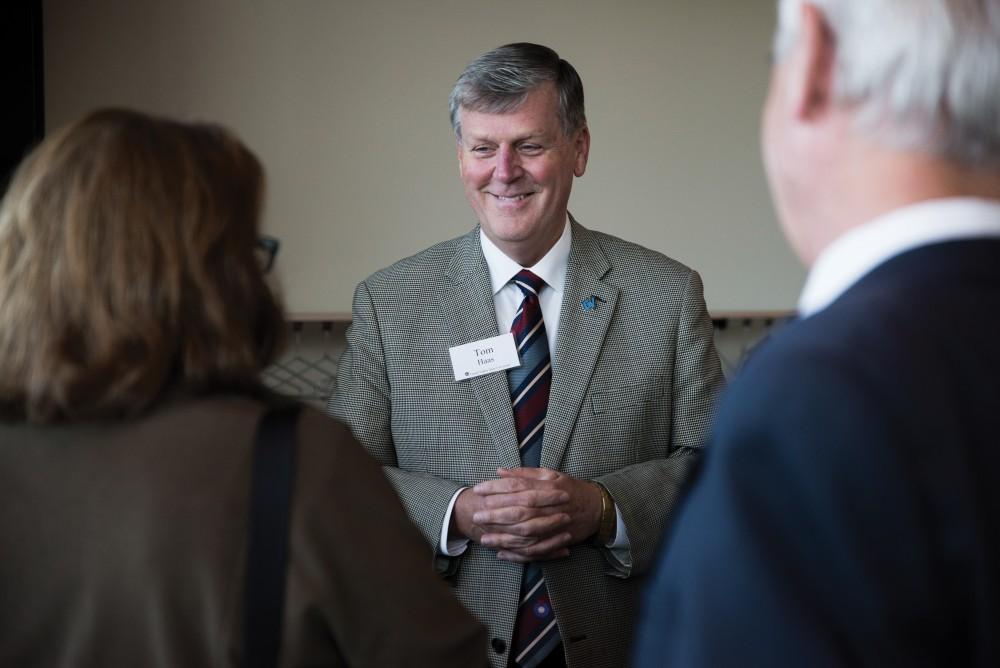 President Thomas J. Haas has raised the bar for Grand Valley State University’s dedication to civic engagement by signing a new agreement that promises to strengthen the university’s relationship with its surrounding community.

Under the Campus Compact 30th Anniversary Action Statement of Presidents and Chancellors, it states that GVSU will aim to empower Lakers to create partnerships with their community and prepare its students for engaged citizenship, among other initiatives. The agreement is an addition to the previous Campus Compact Presidents Declaration, which was also signed by Haas.

Haas, who previously chaired the Michigan Campus Compact Board, said the agreement is a reminder of the importance of civic engagement.

“This is an outstanding way to commit the university within our mission to shaping our students,” Haas said. “I’m very pleased at how it will join some of our colleagues on our journey to help our students take their talents and services into the community.”

Campus Compact is a coalition of nearly 1,110 colleges and universities across the nation with administration devoted to campus-based civic engagement. Haas is one of just three university presidents in Michigan to sign the agreement.

Melissa Baker-Boosamra, Michigan Campus Compact liaison for GVSU, worked with members of the university’s civic engagement collective to bring this opportunity to Haas.

Baker-Boosamra said the new agreement does not outline specific goals, but rather serves as a reminder of the efforts GVSU should be making to reach its community.

“This is in large part a symbolic opportunity for Grand Valley,” Baker-Boosamra said. “The role of this statement is not to lay out a specific plan – it’s the opportunity for upper level administrators, presidents and chancellors to say they are committed to civic engagement.”

Although the agreement doesn’t provide clear-cut initiatives for improving civic engagement, GVSU’s strategic plan for 2016-2021 does.

On the curricular level, a class within the College of Community and Public Service was given the opportunity to work with the City of Grand Rapids to conduct research on how to retain talent in the city. The students were later invited to the Grand Rapids City Commission to present their findings.

Baker-Boosamra said it’s important for all universities to promote civic engagement as it prepares students to be valuable citizens.

“I really think of civic engagement as the responsibility of a university in a democracy,” she said. “It’s our job to prepare students to be aware, compassionate and active citizens. And as individuals, it’s also our job to serve as an anchor in our communities.”

Presidents from participating universities and colleges will later reconvene for the Campus Compact 30th Anniversary Conference and Presidents Summit on March 20 in Boston.

To read the civic engagement agreement in full, visit www.conference.compact.org.