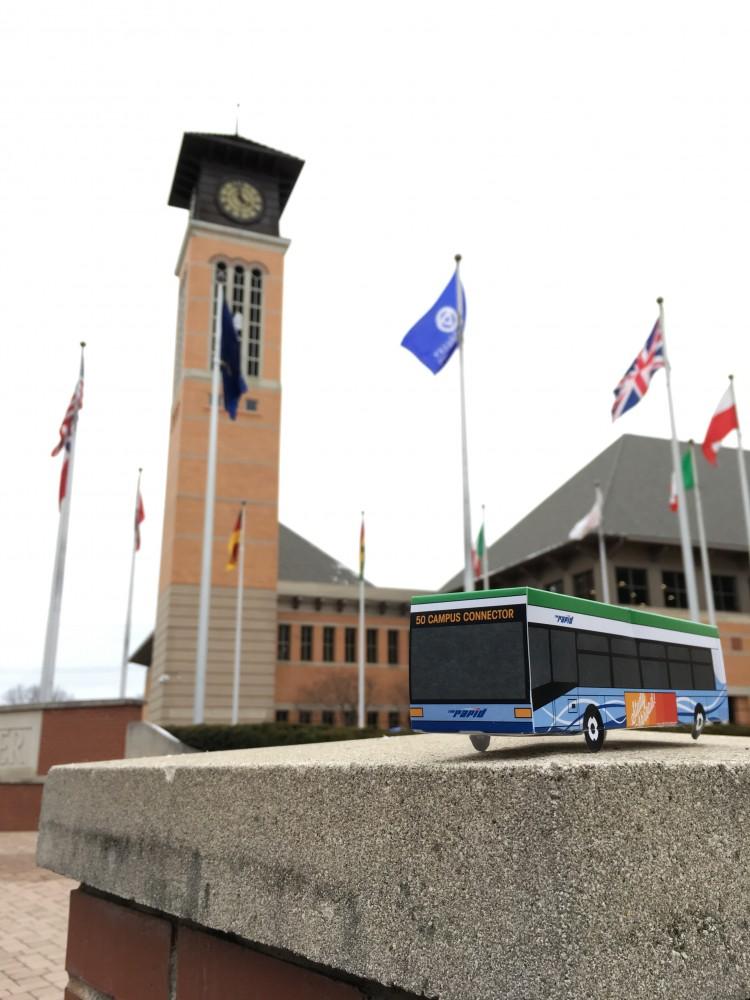 The Padnos International Center is trying a new way to raise money for its many study abroad scholarships. Tiny, foldable buses that resemble Grand Valley State University’s Route 50 Campus Connector buses are being given out to raise awareness for the current study abroad scholarships, as well as the newest one. The fundraising campaign will run through Monday, Feb. 20.

Alissa Lane is the outreach coordinator for the PIC and has been working on the new campaign.

“In one sense it’s a way to raise money, but I think it’s also something that creates goodwill,” Lane said. “It’s giving people an awareness that these scholarships exist and that they have the ability to donate to them.”

Many study abroad scholarships given by the PIC require students to spend a certain amount of time in their host country to qualify for the award. For example, the Barbara H. Padnos Scholarship requires students to study abroad for two semesters.

Lane said the new scholarship helps the center keep up with the current demand of students only wanting to study abroad for a short time. Eight hundred fifty-three GVSU students studied abroad last year, and many of them depended on financial aid.

“The number one concern people have when looking at studying abroad is ‘How do I pay for this?’” Lane said. “(Cost) shouldn’t be the thing that keeps students from looking into studying abroad.”

The center is asking for donations from students, faculty, staff and alumni. The donations can be made at the 20/20 Desk and the PIC in Lake Ontario Hall 130. Donations are also being accepted at outreach tables in the Kirkhof Center and Mackinac Hall. Students who donate at one of these on-campus locations will be given a paper bus bank. Each bus bank has a small slot at the top like a piggy bank, symbolizing the idea of people saving up money to give to the center.

“I think the bus is focused on helping students become donors from a very early age to the university,” Lane said. “It might not seem like you’re a donor just giving a couple bucks, but collectively, it makes a big difference.”

Sean Shepard, the assistant outreach coordinator for the PIC and a senior at GVSU, said he got involved with the center after doing some presentations on his study abroad trip to London. He’s done tabling in the Kirkhof Center and Mackinac Hall to try to raise awareness for these scholarships.

“It really is a life changing experience, and you can tell GVSU really believes in that, and they sacrifice a lot so they can provide students with the opportunity to go abroad,” Shepard said.

Lane said the design of the bus banks is to remind students of their time at GVSU and hopefully to inspire them to donate so students can study abroad.

“It’s the idea of moving people, getting them off campus and getting them to the other places around the world,” Lane said.