High enrollment rates both a blessing and a curse 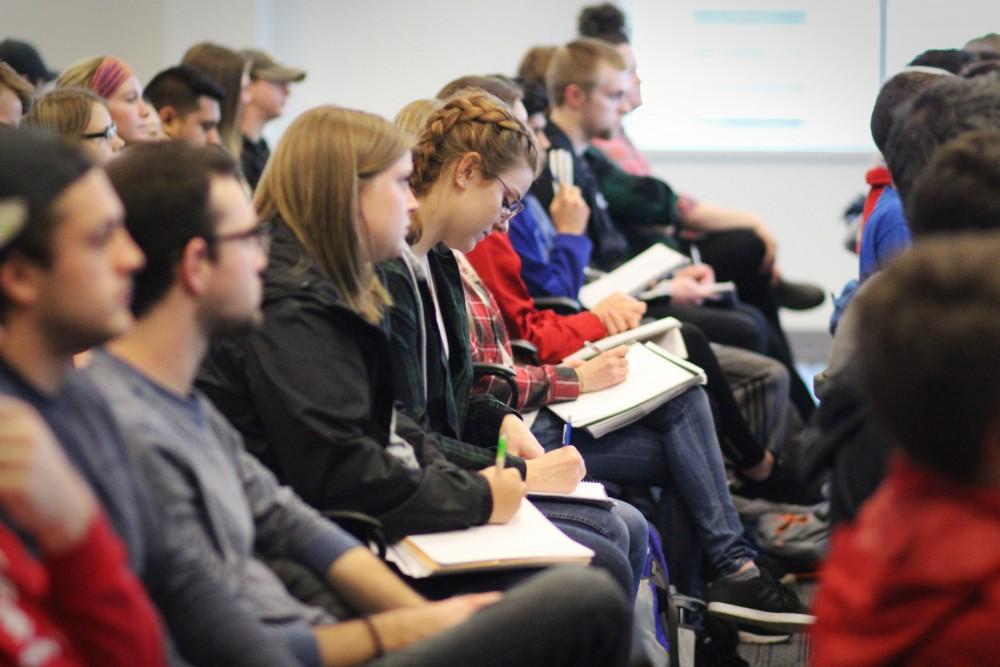 In 2016, Grand Valley State University saw record-breaking first-year enrollment rates, and the university has continued to see large groups of incoming students with each passing school year. Approximately 4,380 students were welcomed to Grand Valley in fall 2016, with the enrollment for the 2018-2019 year falling a few hundred short at about 4,000.

Grand Valley has managed to maintain one of Michigan’s highest freshman enrollment rates with GVSU’s current total enrollment standing at 24,677 students. This continued growth has also seen an increase in diversity at the university. This year student enrollment has increased six percent in number of students of color. Grand Valley President Haas is hopeful for the increase in enrollment rates to continue to translate to higher graduation rates.

“I’m really proud of the fact that we had a record number of graduates last year. 5,700 in the undergraduate and graduate programs,” Haas said.

The steady growth of Grand Valley first-year enrollment is proof that the university’s programs and resources are appealing to more and more high school graduates. The enrollment rates at Grand Valley have rapidly catapulted the university to becoming one of the largest in the state of Michigan.

Although high enrollment rates do demonstrate how Grand Valley’s dedication toward student development has paid off, the steady increase in students may be stretching campus amenities thin. Perhaps the Grand Valley population has begun to outgrow its facilities as more students fill the classrooms, housing and buses across both campuses.

Grand Valley’s ongoing construction projects have managed to create more classroom spaces and broadened the university’s campuses. However, many of these new facilities did not include any new parking parameters for students, resulting in many students having to take public transportation rather than driving themselves. Many students have difficulty getting to classes in the Cook-DeVos Health and Science Center and the new Raleigh J. Finkelstein hall, both located on GVSU’s extended downtown campus. The lack of parking on Grand Rapids ‘Medical Mile’ has forced students to have to bus from GVSU’s Pew campus, which has made bus trips more crowded and lengthy.

Class sizes have had to increase to accommodate the number of students attending GVSU courses. This can often mean that classes could double in size, with some students still not being able to enroll in the classes they need. Classroom sizes can also begin to feel smaller as more students fill the seats, resulting in a more hectic learning environment. While the university has developed several more buildings on campus, many have been dedicated to health sciences, leaving many programs to the same small facilities they have operated out of for years.

Grand Valley’s student population will most likely keep growing due to the university’s commitment to student education. This will continue to diversify Grand Valley while also changing the community with each new year of students. As the university grows with each passing school year, campus amenities will begin to become more obsolete as the student body outweighs the resources it has. Moving forward, dedicating efforts to increasing facilities, parking, transportation and other campus resources to ensure students are thriving in their time at the university will be vial.