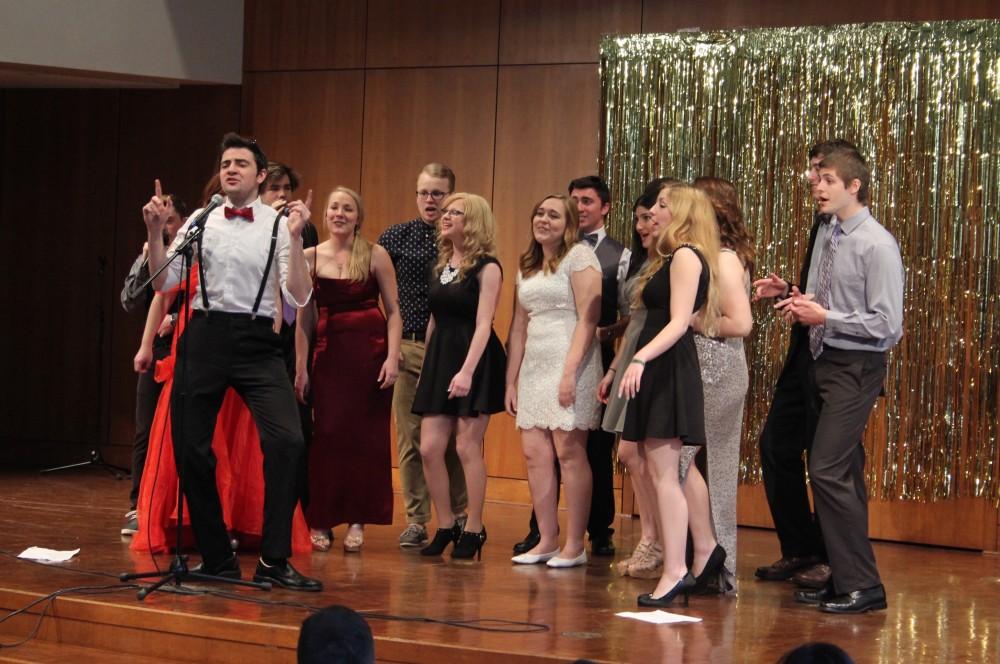 In celebration of its 10-year anniversary, one of Grand Valley State University’s a cappella groups, GrooVe, put on their “GrooVy Decade Concert” on March 30 in the Cook-DeWitt Center. The show included performances of popular hits like Paramore’s “Misery Business” and Earth, Wind & Fire’s “September.”

Throughout the concert, members took turns soloing and providing backup vocals to both pop and classic songs. The performers danced, gestured and interacted onstage, giving the audience an energetic performance.

As part of their winter semester tradition, GrooVe alumni also performed during the alumni song, “Wine Red.” A handful of alumni joined the group onstage as two former members sung solos with the support of their peers.

Joining GrooVe were Central Harmony from Central Michigan University, who opened the concert and performed again after the intermission.

For the members, GrooVe’s 10th year serves as a reminder of students in the group before them and the group’s emphasis on “family.”

“It’s extremely special that we have been an organization for ten years already,” said member Siera Monroe said. “Even though I’ve only been a part of it (for) two years, GrooVe is my family… This just shows how far the family goes back.”

“In our heads, it’s kind of like a big family reunion,” said sophomore member Jill Bucaro. “It’s a lot of fun getting the whole gang back together.”

While alumni stay on touch and join in the alumni song each year, the anniversary gave former students another opportunity to reconnect and reminisce about singing with GrooVe. Monroe said that alumni joining them in rehearsals often left them “a bit teary-eyed,” but that the former members were able to provide helpful feedback. She also mentioned that the group utilizes bonding activities to bring students closer and catch up.

“It’s cool because they get to interact with the new members, get to know them…the new members love having them around,” Monroe said.

As an integrated science and education major, Monroe said that performing with GrooVe allows her to keep in touch with her musical roots. After singing since elementary school, she knew that being involved with music in college was important to her.

“It’s kind of my home away from home,” Monroe said. “I auditioned, made it in and I just fell in love with the group dynamic and a cappella.”

Bucaro also cited the closeness between members as a reason to return to GrooVe.

“People in this group are always the first people that I go to for help. They definitely make Grand Valley home,” she said.

Since its first year in 2009, GrooVe has performed both on and off campus. The group has participated in a cappella competitions across the state and sung at the Grand Rapids Children’s Museum and the Mrs. Michigan Pageant. As one of four a cappella groups on GVSU’s campus, GrooVe works to bring fun concerts to students as well as areas across Michigan.

GrooVe will perform at GVSU’s Relay for Life event on Friday, April 5 at 11:30 p.m. They can also be followed on all social media.