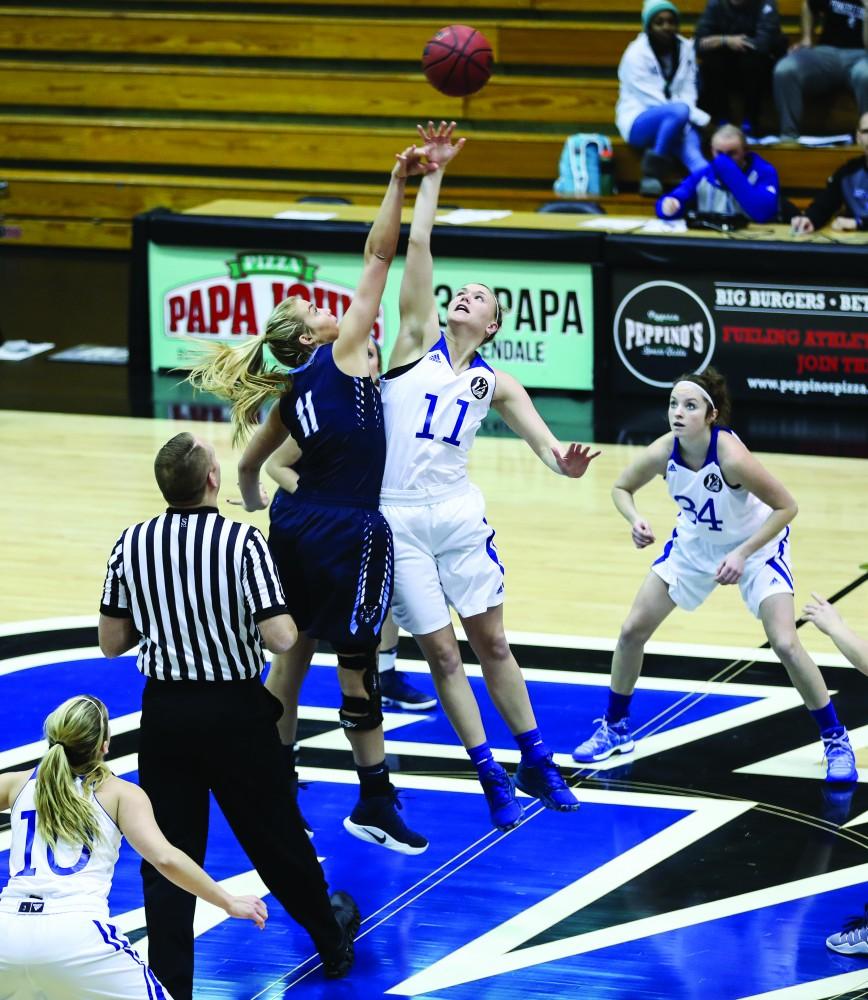 Piper Tucker (11) takes the opening tip of the game during the game vs. Northwood inside the Fieldhouse Arena in Allendale on Thursday, Feb. 9, 2017.

In the final game of the regular season, the Grand Valley State women’s basketball team extended its winning streak to five games with a 68-49 win over Ferris State. The Lakers (21-6) clinched the No. 3 seed in the GLIAC Tournament with the win.

Earlier in the season, GVSU blew out Ferris State 85-38 at home. In the second matchup in Big Rapids, the Bulldogs stunned the Lakers in the first quarter with a full-court press. At the first intermission, the Lakers and Bulldogs were all square at 11 points.

Looking for a rhythm on offense, the Lakers found it in the second quarter. GVSU figured out how to beat the Bulldogs press and shots started to fall for the Lakers.

“We had a better team effort,” said sophomore Taylor Parmley. “That press really disrupted us for some reason in the first quarter and we figured a way to beat that.”

The GVSU offense exploded in the second quarter for 26 points.

“I thought we did a good job taking care of the basketball,” said GVSU coach Mike Williams. “We made some threes in the second quarter that opened the game up.”

Along with the offense clicking on all cylinders, the Lakers showed why they possess the top ranked defense in the nation, allowing only 51.9 points per game. The Bulldogs scored only five points in the second quarter, giving the Lakers a 21-point lead at halftime.

The Bulldogs chipped away at the lead in the second half but not enough to make it a close game. Senior Piper Tucker finished with a team-high 12 points while Parmley finished with 10 points. Junior Korynn Hincka provided a spark for the Lakers with 10 points off the bench.

“It’s nice to know that we have people stepping up even when the starters aren’t playing as well,” Tucker said. “Once we got the ball moving, points were flowing so it was a team effort.”

The Lakers took the foot off the gas and cruised to a 19-point victory in the second half.

“We got that 22-point lead and we kind of just dialed it back,” Williams said. “Heading into the GLIAC Tournament, we can’t do that. That was a little disappointing, but at the same time we did take care of business.”

With the win, the Lakers clinched the No. 3 seed in the GLIAC Tournament and face No. 6 Northwood in the first round.

As a willing testament last season, the Lakers understand that the seeding means nothing during the postseason. GVSU ranked No. 7 in the NCAA Midwest Region before upsetting four consecutive teams on the way to the Final Four.

“You wipe the table clean and now you have to prove yourself again,” Williams said.

GVSU split the regular season series against Northwood, beating the Timberwolves 73-52 at home and losing 60-53 on the road. The Lakers are riding a five-game win streak, but the Timberwolves are just as hot. Northwood has won four consecutive games including an upset road win against Saginaw Valley State.

“We’re feeling pretty confident but every game is tough,” Tucker said. “(Northwood) always comes out swinging so we’re just trying to get the upper hand this Tuesday.”

To GVSU’s advantage, the Lakers will host Northwood Tuesday, Feb. 28 at 7 p.m.