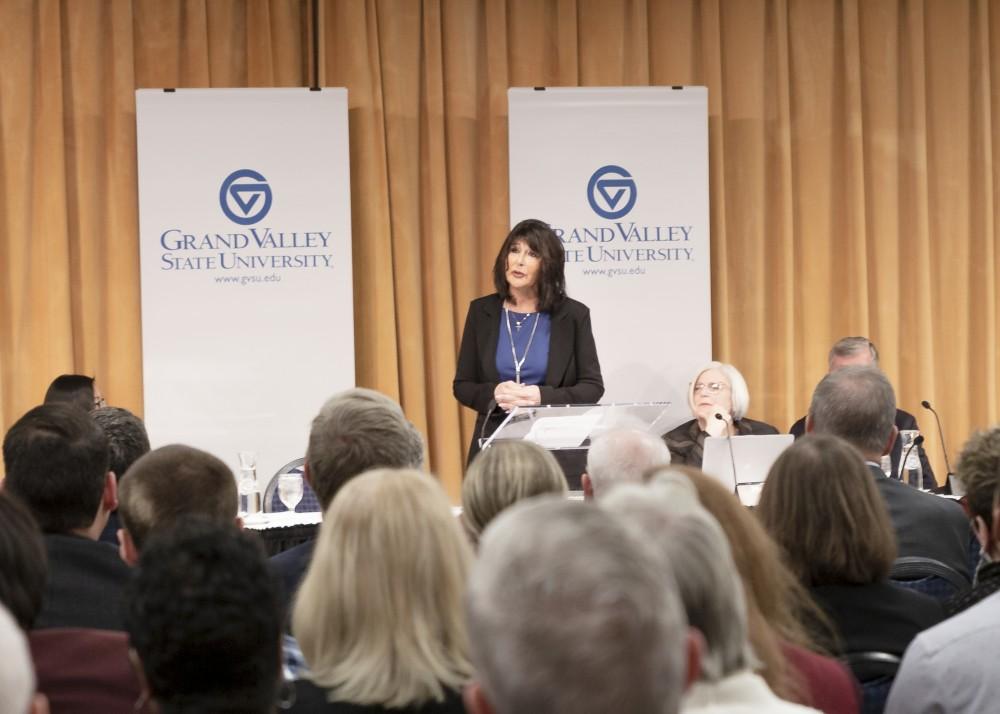 Dr. Mantella addresses the crowd at GVSU's Kirkhof Center following her unanimous appointment. Mantella will be the fifth president in school history and the first female president. GVL / Leah Kerr

Specifically, Board of Trustees Chair Mary Kramer said that out of the four semi-finalists that the search committee proposed to the board, Mantella stood out because of her leadership roles in enrollment management and student life. Mantella’s experience in “life-long learning” and global studies was also appealing, Kramer said.

Mantella currently sits as executive vice president and chief executive officer of the Lifelong Learning Network at Northeastern University in Boston. She holds a bachelor’s degree in social work from Syracuse University and a doctorate degree in college and university administration from Michigan State University.

Mantella will be GVSU’s fifth president in its nearly 60-year history.

Following her election, Mantella joined the board in front of the crowd and spoke about her excitement to be GVSU’s next president.

“I’m inspired by the energy and the passion you all have for this exceptional place,” Mantella said. “Grand Valley State is brimming with commitment to its student experience, it’s animated by talented professionals, it’s anchored in strong assents and it’s driven by its values and unparalleled momentum.”

“More than ever, this nation needs breakout universities who leverage experiences to better not just themselves, but the lives of the communities and learners they serve. Grand Valley State University has the triple threat: one, it fulfills its mission as a true economic development driver. Two, it shapes a high quality community of learning for the 21st century. Three, it’s become a model for creating and accessing a path leading to prosperity.”

President Haas and former presidents Mark Murray and Don Lubbers expressed their approval of the newly-elected president. The group offered Mantella council early on in her presidential career, which she said she would take them up on.

Haas provided his stamp of approval for his replacement, noting that Mantella’s experience and passion will make her more than suitable as GVSU’s next president.

“The trustees have made a wise choice in their selection of Dr. Mantella,” Haas said. “Her background is impressive, and her passion for education and her warmth as a person are obvious. I look forward to working with her and others to ensure a smooth transition to her leadership.”

The election was made official by Haas giving Mantella a GVSU pin and a hug. Haas also said it would be his pleasure to finally be able to take a selfie with the president before taking a photo with Mantella in front of the crowd.

Kramer said that Mantella’s election reflects a need to combat challenges affecting all Michigan universities, such as a shrinking pool of traditionally-aged college students.

“Dr. Mantella is the right person, at the right time to become the president of Grand Valley. She is passionately committed to our liberal education model of small classes led by her very distinguished faculty…” Kennedy said. “(She) knows how to navigate and succeed in a very competitive marketplace.”

With Mantella’s election official, Kramer said that she’s excited to see how the president-elect will face issues in education and continue to push GVSU’s momentum forward, especially in increasing the connectivity of all Lakers.

“What will be exciting to see is how Dr. Mantella will put her own stamp on the leadership continuum,” Kramer said. “She won’t ‘copy’ T Haas. She will find her own way of relating to students in an authentic way. And we think she will find ways to make ‘Lakers for a Lifetime’ by keeping alumni connected to us. We can be a resource as they find they need new skills to succeed in the future.”