Writing Center consultations on the rise 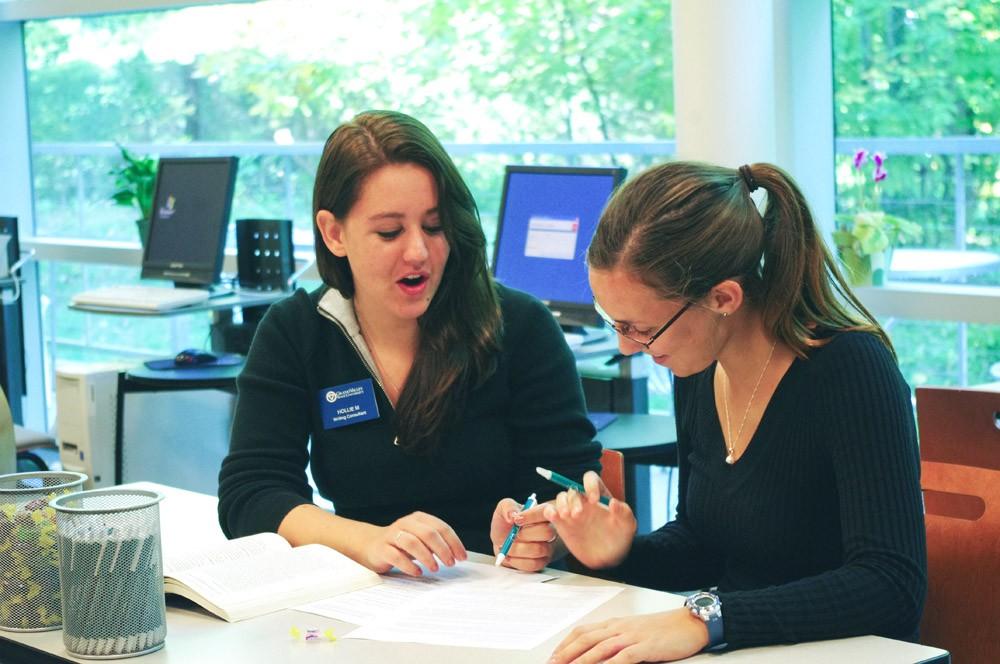 As the seasons change and the trees begin to shed their leaves, the Fred Meijer Center for Writing and Michigan Authors, more commonly known as the Grand Valley State University Writing Center (WC), is in the midst of a major growth spurt.

“Those numbers are expected to continue to rise,” said Patrick Johnson, assistant director of the WC.

Johnson attributed much of the rise in the number of consultations and students coming in for the to the initiative of WC Director Ellen Schendel.

Junior Carla Landhuis, who has worked at the Center for the past two years as an English consultant, said she is already busier this year than last year.

“I’m in the Center more often than I was last year, so I have definitely worked with more people,” she said. “We have been doing more workshops as well.”

The 51 consultants the center employs are regularly asked to attend writing workshops while working with students on their papers. The majority of the consultations are scheduled ahead of time and occur within the WC itself.

Since the fall of 2009, consultations have been available to make online, leading to a more efficient system for the center. The center recorded more than 1,500 more consultations than the previous year as a result of that initiative. That number has continued to grow and new technology should see that trend continue in the next five years as well.

While the Center provides consultants for Writing 150 and 098 classes, consultants are also now available for all students on Blackboard I.M. through Wimba for online consultations. The Center also plans on being a crucial resource for the new library, set to debut in the Fall 2013.

“When the new library is built, there is going to be a section called the Knowledge Market, which will be an open space where students will engage in writing their work and researching those things,” Johnson said. “Essentially, we will be part of the research process, part of the composition process while they’re at the library, so it’s more of an open approach to how students learn and how they write. I think we’re going to see a lot of growth as far as that being another satellite location for us.”

While there have not been any major changes to the general education part of the writing curriculum for GVSU students, Dan Royer, chair for the Writing department, said believes introducing students to the WC early on better prepares them for writing for university courses as they grow older.

“We’re trying to prepare students for the kind of writing they will do as freshmen and sophomores around the university,” Royer said. “We’re really trying to target that specific need so we can really have some impact. Over the past 10 years, our program has really been focused on research writing and the kinds of writing that faculty around campus tell us that they expect of students.”

The Writing Center is located at 120 Lake Ontario Hall on the Allendale Campus. Online hours are available on Blackboard between 8 p.m. through midnight Monday through Wednesday nights. Johnson expects consultations to pick up as the semester moves along.

“Our business ramps up considerably as we get to the last six to eight weeks of the semester, so I think we’re going to see that we’ll start hitting our stride as we get there,” Johnson said. “We’ve been pretty busy all semester long and that seems to be pretty indicative that we’re going to have another big year.”